The ability is even more impressive given that the animals received no training to understand the gesture and have never been domesticated.

"By showing that African elephants spontaneously understand human pointing, without any training to do so, we have shown that the ability to understand pointing is not uniquely human but has also evolved in a lineage of animal very remote from the primates," study co-author Richard Byrne of the University of St Andrews said in a statement. 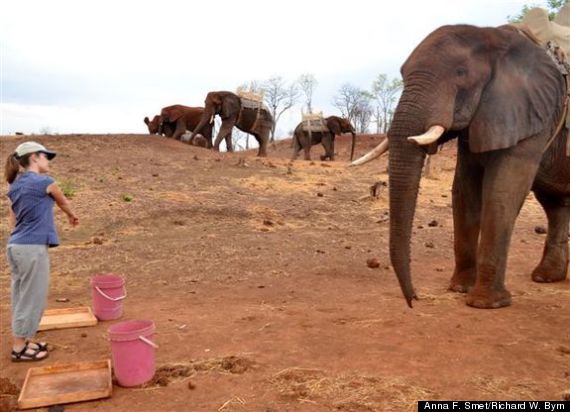 Elephants can follow a point to a tasty morsel of food without prompting.

The new finding gives elephants membership in a select club that includes dogs, cats and bottlenose dolphins. Chimpanzees that have lived with humans can be trained to follow a point, but wild chimps typically fare worse than dogs at understanding human gestures. [5 Animals With a Moral Compass]

Byrne and his colleague Anna Smet, also of St. Andrews, studied a group of 11 African elephants that took tourists on rides near Victoria Falls, on the border of Zambia and Zimbabwe. The animals had been trained to follow vocal commands, but had never learned pointing.

The team hid tasty morsels of food in several containers, then pointed to the correct bin to direct elephants to the food.

The elephants went to the correct food container two-thirds of the time, significantly above chance. All told, five out of 11 of the elephants consistently went to the right container. In contrast, 1-year-old children typically get it right about 70 percent of the time.

Even more impressive, many of the pachyderms chose the correct bin from the first try.

"What really surprised us is that they did not apparently need to learn anything. Their understanding was as good on the first trial as the last, and we could find no sign of learning over the experiment," Byrne said.

Those elephants born in captivity or bred for more human contact performed no better at the task.

Though elephants make other gestures with their trunks, no one knows whether those gestures are parallel to pointing.

The findings suggest that elephants' ability to follow a point may arise from their social natures. Elephants live in large groups and display many emotional behaviors, including marking the gravesites of lost pack members and weeping for their dead. Elephants also recognize themselves in a mirror, a hallmark of animals with sociality and empathy.

"What elephants share with humans is that they live in an elaborate and complex network in which support, empathy, and help for others are critical for survival. It may be only in such a society that the ability to follow pointing has adaptive value, or, more generally, elephant society may have selected for an ability to understand when others are trying to communicate with them, and they are thus able to work out what pointing is about when they see it," Byrne said.

The research was published today (Oct. 10) in the journal Current Biology.