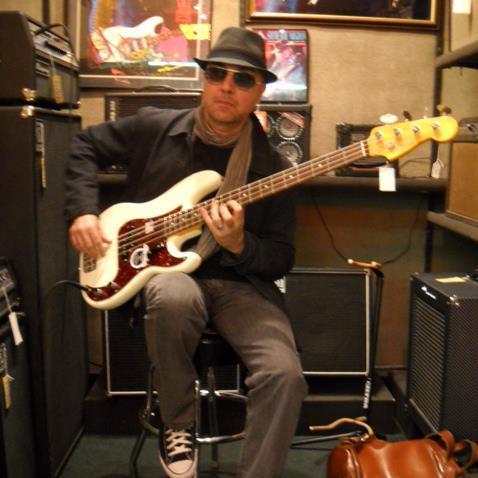 We serve the singer, the song, the soloist, and ultimately the listener. Though we do not possess the harmonic nor sonic range of a guitar, keyboards, voice, horns, wind instruments, nor the dynamics of drums and percussion-the bass player determines how a musical chord actually sounds - which, in essence -often determines whether or not you'll like the track. Do the math!

The Rock and Roll Hall of Fame nominees have been announced and I congratulate all the artists: The Cars, Chic, Chicago, Cheap Trick, Deep Purple, Janet Jackson, The J.B.'s, Chaka Khan, Los Lobos, Steve Miller, Nine Inch Nails, N.W.A., The Smiths, The Spinners, and Yes.

Since the Rock and Roll Hall of Fame Foundation began in 1983 there has been much controversy over who belongs and who does not. It's no different than sports Halls of Fame. Controversy, dispute, and rock 'n' roll are siblings, and I accept that. However I must stand up for my woefully neglected bass brethren, some of whom no longer lay down the groove on this mortal coil.

As such, history reveals that when iconic Rock and Roll Hall of Famers fired their signature bass players, their commercial and artistic fortunes waned considerably: Elton John, Elvis Costello, Bruce Springsteen - who recovered when he re-hired the E Street Band, Billy Joel, Eric Clapton, and Alice Cooper - who dumped his entire original band; among others, were never the same sans their formative four string bandmates.

Obviously there are more than eleven bass players who deserve recognition in the Hall. Based on conversations with my fellow players, musicians, engineers, producers, writers, and vinyl loving devotees, herein are eleven from the classic rock era who must be cited, especially given the fact that they appear on several Rock and Roll Hall of Fame artists' most important recordings.

This list, in the tradition of Spinal Tap, goes to 11!

Dee Murray: To atone for producer Gus Dudgeon's curious refusal to utilize his extraordinary road band in the studio until 1972, Elton John released 11-17-70 which is among the essential live albums of any era in rock. Bassist Dee Murray and drummer Nigel Olsson, who, along with guitarist Davey Johnstone, also created the vocal harmonies to Elton's early classics, distinguished themselves as an elite rhythm section. The original Elton John Band's absence from the Hall of Fame is inexcusable.

Kenny Aaronson: Cited as Bassist of the Year in 1988 by Rolling Stone, Kenny is among rock's most versatile and resourceful players. His career spans scores of seminal sides and concert performances, including Hall of Famers Ronnie Spector, Bob Dylan, Sammy Hagar, Joan Jett, Daryl Hall & John Oates, and one artist whose omission from the Hall is sacrilege: Rick Derringer.

Harvey Brooks: Session bassist and producer Harvey Brooks was the go-to player on the New York studio scene in the 1960s. As the electric bass was essentially in its infancy, Brooks brought his deep understanding of blues, pop, soul, folk, and jazz to the instrument, appearing on such influential albums by Hall of Famers Bob Dylan (Highway 61 Revisited) Miles Davis (Bitches Brew -with Dave Holland), the Doors (Soft Parade), and Al Kooper's Super Sessions with Mike Bloomfield, to name a few.

John Dalton and Jim Rodford: Behold the missing Kinks! Of the bassists who served Muswell Hill's favorite sons following the departure of founding member Peter Quaife, John Dalton is likely the one player whom American rock fans heard the most on FM radio by way of "Lola," "Victoria," "20th Century Man," "Celluloid Heroes," and "Jukebox Music," among many others from 1969 to 1976. Jim Rodford was a founding member of the progressive pop powerhouse Argent (1969-76) and the longest tenured (1978-96) and most musically adept bassist The Kinks ever employed.

Klaus Voorman: In addition to his brilliant performances on the Beatles' extensive solo canon, Klaus was a first- call studio bassist for Hall of Famers B.B. King, Donovan, Jerry Lee Lewis, Lou Reed, Randy Newman, and Dion, among others. Voorman's intro to Carly Simon's "You're So Vain," a hit song about another Hall of Famer, is among the most recognizable motifs in the history of pop music.

Herbie Flowers: "Being a bass-player is like being a truck driver...you're paid to arrive on time and safely at your destination!" His repetitive, major 10th interval glissando created rock's greatest bassline for Hall of Famer Lou Reed's "Walk on the Wild Side." With a blue 1960 Fender Jazz which he purchased from Manny's in New York City for $79.00, Herbie Flowers emerged as the quintessential session player in his native UK. His drop-tuning bass on David Essex's "Rock On," and riveting counterpoint beneath David Bowie's "Space Oddity" remain watershed.

Lee Sklar: A session giant with album credits in the thousands, Lee was the foundation for "The Section" - a musical assemblage of Los Angeles based virtuosos who were the catalyst on scores of iconic album and singles sessions. Among the Hall of Famers Lee enhanced include: James Taylor, Ray Charles, Daryl Hall & John Oates, Donna Summer, Jackson Browne, Diana Ross, David Crosby, Graham Nash, and Michael Jackson, among others.

Doug Yule: For all the hipster hosannas heaped upon the Velvet Underground - and deservedly so, one essential member is oft overlooked - bassist Doug Yule, who joined the band upon John Cale's dismissal in 1968. Unlike Cale, who was indifferent to the instrument, Yule was a fine bass player and singer who complimented Lou's gravitation from the avant-garde towards the then burgeoning singer-songwriter movement. Though The Velvet Underground & Nico (1967) and White Light/White Heat (1968) were influential, groundbreaking efforts; to my ears Velvet Underground (1969) and Loaded (1970) both with Yule, are the VU's most enduring works.