Have you ever been curious about the part of Maine so removed from the coastline it seems to be in another country: Namely, Canada? Drive North on US Route 1, as far as it goes in the United States, and you'll start to hear more French than English on the radio. Welcome to Aroostook County - the largest county on the East Coast, bounded by Canada on three sides and encompassing the northeastern-most point in the lower 48. 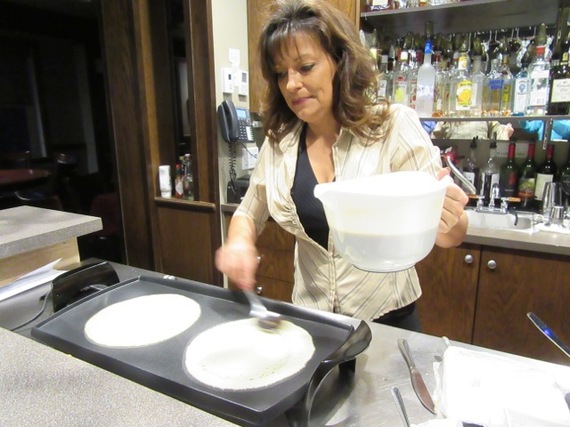 From Houlton to Presque Isle to Madawaska and Fort Kent, there are some pretty incredible attractions - the majority of which are quite probably unknown to nearly all the world outside of Aroostook County. But not any more. As the following list indicates, there's reason to head to Maine's most extreme Northern parts.

For those who would like to find out more about these, and other Offbeat Escapes in the Northeast, check out GetawayMavens.com. 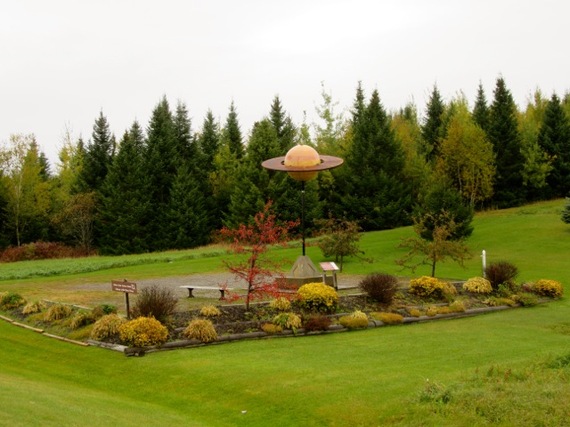 1. There's a to-scale Solar System Model on 40 miles of Route 1 between Houlton and Presque Isle. Given all the hoopla a few months ago around a similar project in the Nevada desert on 7 miles of dry lakebed, this one is bigger (actual objects are 93,000,000 times the size of each model) and older (built in 2000). Starting at the Houlton Information Center (northern end of I-95) and running 40 miles to the U. of Maine Campus in Presque Isle, keep your eyes open for the eight planets in the solar system that stand by the side of the road, constructed by the people of Aroostook County in cooperation with the University of Maine at Presque Isle. Larger ones (Jupiter, Saturn), of course, are easy to spot, but the smaller ones require an eagle eye. 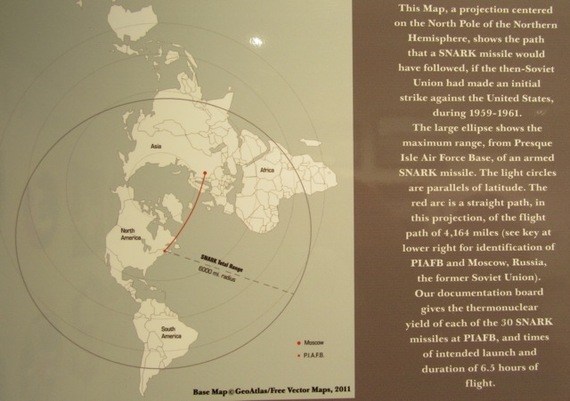 2. The Presque Isle Air Force Base, opened in 1942 and closed in 1960, was the northernmost AFB in the county, and as such chosen as home to the nation's first Intercontinental Ballistic Missile. From 1958-1961, the Air Base also housed a cache of Snark Cruise Missiles, stored in low-slung grey hangars and ready for launch on 16-foot launch pads at any time. Sixty seven feet long with a 42 foot wingspan, the nukes could be land-launched and travel 6,300 miles - about as far as Moscow. You can still see the remnants of the launch pads, some warehouses and The Presque Isle Air Museum at the Northern Maine Regional Airport that houses declassified documents and photos. 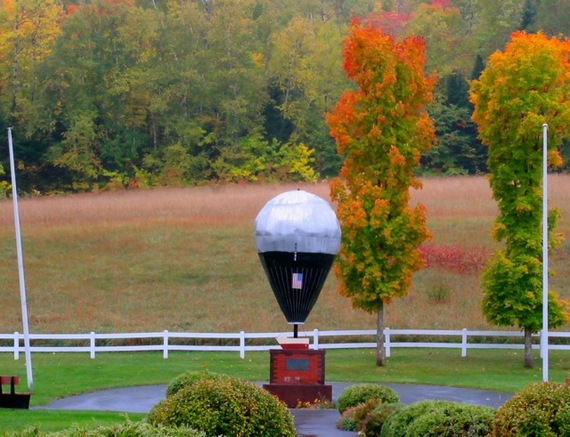 3. Presque Isle ME was also known for the feats of another aircraft, the Double Eagle II Balloon, which launched from here, on August 11, 1978, landing just outside of Paris 137 hours later on August 17th. It was the world's first successful transatlantic hot air balloon flight, making the cover of Sports Illustrated, Time and Reader's Digest. A monument now marks the spot of this historic flight. 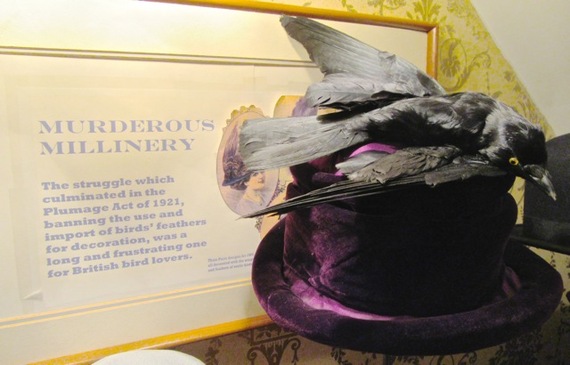 4. The Presque Isle Historical Society celebrates the lively life of a never-married entrepreneurial woman, Vera Estey, in her circa 1875 House. Vera lived in this home in a tony part of town (now called Doctor Row) until her death in 1986 at age 92. She grew and sold tulips and lilies to the Boston Fresh Flower Market and lived a good life filled with travel and fancy dress. Her home is both a repository of her top-of-the-line appliances (G.E. 1929 Monitor Top Fridge), clothing (black-bird-topped hat, mink coat, ostrich purse), and furnishings (silk fringed lamps), and ersatz museum of Presque Isle historic oddities - like the Civil War pegleg (warn by an injured vet who had one for weekdays and one for Sunday). 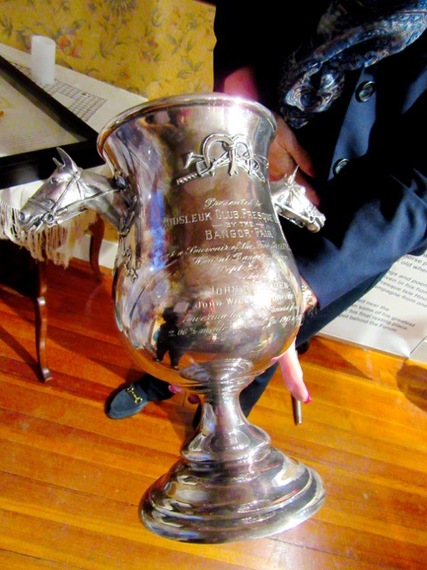 5. Incredibly, one of the most celebrated Presque Isle residents - John R. Braden - wasn't a human being. He was a horse. In the roaring 20's heyday of harness racing, the good men of Presque Isle's Moosleuk Club put together $4,000 and purchased Braden from a Tennessee farm. Beginning in 1921, Braden started in 68 races over 4 seasons, winning 31, and earning a combined $48,000 over his short career. The community threw a banquet in Braden's honor, inviting the steed into the hotel and permitting him to drink champagne from the ornate silver Winner's Cup. Braden died in 1929, much cared for and much loved. He is buried in town.

6. Surprisingly sophisticated for a town on the edge of the Maine "wilderness," Café Sorpreso in Presque Isle is upscale enough to win favor in a much larger city. Even better, talented chefs are adept at a wide range of food, from Pan Seared Scallops in Vermouth, to "Heavenly Haddock" to Lamb Kabob.

7. Even "Down East" Mainers drive Up Route 1 to the St. John River Valley for a season's supply of "New Potatoes." From Presque Isle, it's 60 miles to Madawaska and on the way you'll pass a barrage of potato farm stands. If it's October, they will be bursting with 20 and 50 lb sacks of the tubers - which you can pick up for a song (on the honor system). 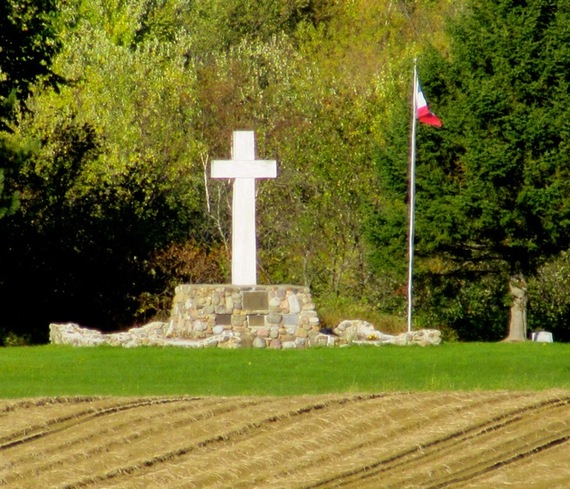 8. Acadians from all over the country come to see the Acadian Cross behind the Tante Blanche Museum in Madawaska. In the 1750's, after Great Britain conquered the region now comprising Nova Scotia, New Brunswick and Price Edward Island, resident Acadians were deported to France and the 13 Colonies (in Louisiana, they are known as Cajuns). However, a small band of "refugees" who "missed the boat" came up the St. John River, thanked God for safe passage, planted the Acadian Cross on the embankment (rebuilt as a 14 foot white marble Historic Shrine where, legend has it, it first stood), and made their home in Northern Maine. 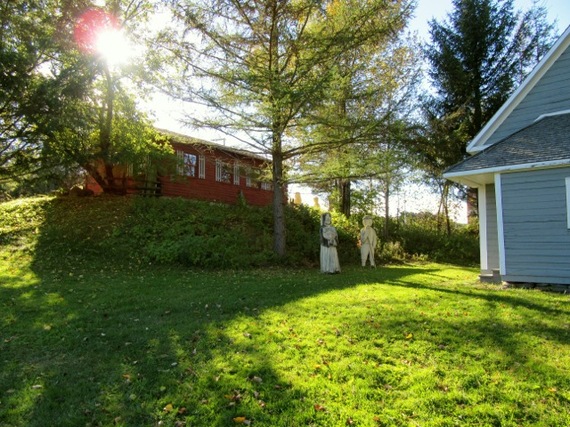 9. Tante Blanche - Marguerite Blanche Thibodeau - was an Acadian folk hero who seemed to be a blend of Mother Theresa, Robin Hood, Paul Bunyan, and Florence Nightingale. An "Angel of Mercy" during the Great Winter Famine of 1796, after floods and frost destroyed all crops, Tante Blanche battled freezing cold wind and snow, going door-to-door to collect food and clothing from the rich to give to the poor. Her story, and other aspects of early Maine-Acadian life are told in the marvelous Tante Blanche Museum in Madawaska, which also includes the town's 1870-1930 schoolhouse and a representative 1700's homestead. 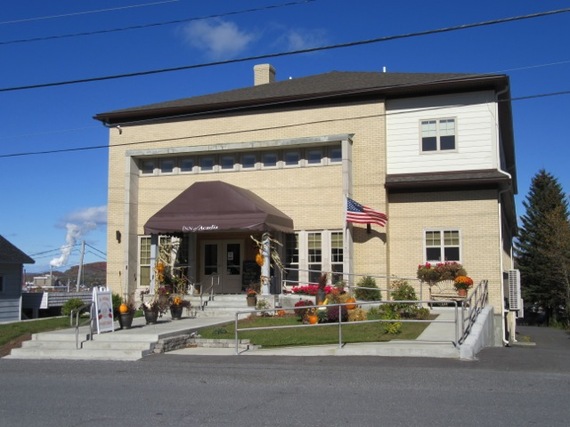 10. Aroostook County's only "Boutique Hotel" - the Inn of Acadia in Madawaska, housed in a former convent nursing home - is friendly, adorable, convenient and comfy. Bedding is delightful, ceiling and windows soar, and bathroom showers, though a bit on the small side, are enlivened by glass mosaic tile work. There's a tiny lobby, a smile at reception, and relief that you've made it here, to the "end of the country" in a way, to such a pleasurable place. At night, locals congregate in the on-site restaurant, the Voyager Lounge, for very good food and live music. In the morning, Ployes - a crepe-like Buckwheat local specialty - is made fresh on a skillet right before your eyes. 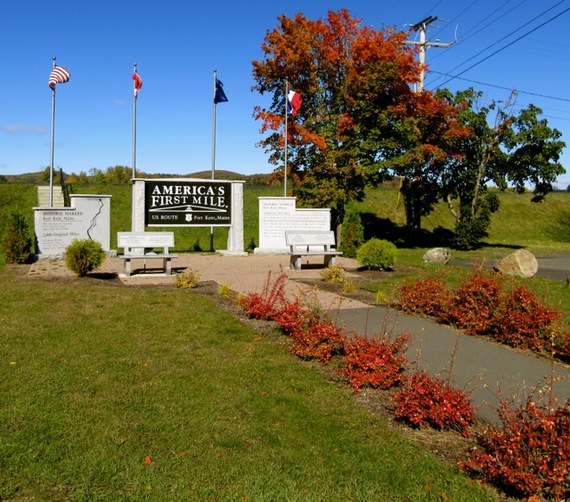 11. Fort Kent ME, 19 miles west of Madawaska along the St. Johns River, is Mile 1 of US Route 1, that runs 2,200 miles south to the tip of Florida along the East Coast. A granite sign and other monuments mark "America's First Mile."

More:
travelicbm
Newsletter Sign Up
An essential daily guide to achieving the good life
Subscribe to our lifestyle email.
Successfully Subscribed!
Realness delivered to your inbox