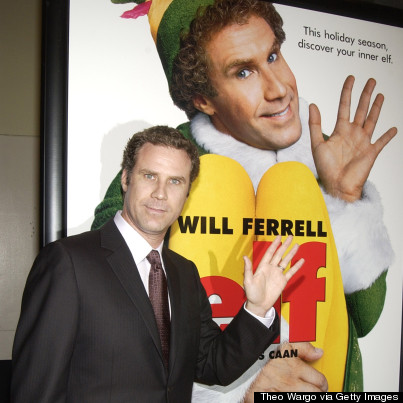 Elf is a holiday movie classic which many people consider on par with A Christmas Story, Holiday Inn, and It's a Wonderful Life.

Certainly, there's a lot to like about Elf. First, its opening credit sequence wonderfully mimics the charm of the stop motion animation classic, Rudolph the Red-Nosed Reindeer.

Additionally, its North Pole scenes with Buddy, the human "elf," are very funny due in large part to Will Ferrell's delightfully over the top performance counterbalanced by the understated Bob Newhart playing his pint-sized father.

Buddy also has some lovely scenes with Zooey Deschanel in the ingénue role. And Buddy's attempts to fit in with his new found family are hilarious especially when he eats.

So what makes Elf such a disaster?

1) First and foremost, the casting of James Caan as a New York children's book editor is a horrible mistake. That this man works in the rarefied world of Manhattan book publishing strains credibility. No attempt is made to mask Caan's roots as the Bronx-born, Queens-raised, college dropout that he is in real life, and his speaking voice is especially jarring. Even an expensive-looking camel coat can't mask his most memorable role as the short-tempered Sonny Corelone in The Godfather. In other words, Caan looks like he's wandered in from another movie and isn't very happy about it.

2) Not to put too fine a point on it, but Buddy's backstory seems more like something Tim Burton wrote than a Christmas tale. Specifically, Buddy has been abandoned to an orphanage by his father (Caan) and mother (who is inexplicably deceased). After Buddy's birth mother dies, Caan remarries and fathers a second son without somehow knowing he has a first one. And this is a Christmas movie? It seems more like the pedigree of a family on public assistance then a blended, Upper East Side family.

3) Everyone loves little people acting funny, but should they? Peter Dinklage may be fun as a pugnacious children's book author intent on preserving his dignity, but he comes pretty close to exploiting his dwarfism when he jumps off the boardroom table to take Buddy down in a fight. At best it's a cheap laugh; at worst, it's questionable taste.

4) The world's biggest grump plays Santa Claus. If you didn't realize that Ed Asner plays Santa Claus, you're not alone. Forget the fact that the venerable character actor is best known for playing curmudgeons rather than "jolly old elves"; why would you hire someone as recognizable as Asner and then bury him under a bushel of whiskers? Not to mention give him nothing to do. What a waste of talent and money!

5) Nobody in New York publishing holds business meetings on Christmas Eve. Charles Dickens might be able to get away with it, but not even Rupert Murdoch would call a meeting on December 24th. That's because people who work in publishing disappear from the face of the earth between Thanksgiving and New Years. Good luck with that meeting.

6) But the movie really comes off the rails in its final act. The scene in Central Park where Santa's sleigh (powered by the spirit of Christmas) begins to falter is not only saccharine, but we haven't seen such lousy special effects since Santa Claus Conquers the Martians. The tonality is all wrong and the sequence manages to be both over inflated and fall flat. The fact that this schmaltz-fest manages to strain credibility in a movie about Santa's elves is not the kind of achievement most filmmakers aspire to. I guess that's why Favreau makes superhero movies.

So yes, Elf has its moments, including almost every scene with Will Ferrell, but it experiences so many missteps that unless you squint real hard, this is one holiday film that doesn't quite deliver. Better stick with A Christmas Story.