Since my advanced cancer diagnosis in 2004, within six weeks of my 11th normal mammogram, I've been on a laser-like mission for the disclosure of density to the patient as part of her mammography results. Shocked and confused that my cancer was so advanced, I questioned my docs why mammograms failed to detect cancer at an early stage. It was only after this inquiry was I informed of my extremely dense breast tissue and its impact on the accuracy of the mammogram.

After scouring the literature about this dense breast tissue that masked my cancer for years, I was shocked to discover that there was a decade of research since 1995, concluding that dense breast tissue is the strongest predictor of the failure of mammography to detect cancer and later stage cancers would be reduced if adjunct tests were added to mammography. Additionally, I learned I was not alone as 40 percent of women have dense breast tissue. Armed with this knowledge, I went back to my new team of docs to ask them to include a woman's dense tissue in her mammography report. When each of them refused, my husband and I turned to the legislature.

In 2005, with little opposition, Connecticut passed the first law in the nation to require insurance companies to cover ultrasound as an added screening to women with dense breast tissue. This insurance law, strengthened in 2006, contained a barrier, which we later discovered, to women that had high deductible plans. The coverage would only step in once the deductible was met. In addition, most imaging facilities in Connecticut did not routinely offer ultrasound as a screening. It was a challenge for women to find a facility that would include adjunct ultrasound screening as part of their screening protocols.

In 2007, Dr. Gary Griffin, a Connecticut radiologist, contacted me to acknowledge the significant impact of our ultrasound coverage screening law, passed in 2005. His facility was one of the few that embraced our ultrasound coverage bill by offering adjunct screening to women with dense breast tissue. His screening data showed nearly a doubling of invasive cancers detected by ultrasound, on otherwise normal mammograms in women with dense breast tissue. Challenging the status quo, Dr. Griffin later testified in support of our density reporting bill in 2008, in spite of being strongly opposed by his own Society of Radiologists. It took a long arduous year before the density reporting bill crossed the finish line in 2009, catapulting the state of Connecticut as the pioneer in density reporting.

Since that watershed moment, 24 states have followed Connecticut's lead with a density reporting law. Most of these laws were inspired by patients turned advocates; Tennessee, Arizona and Minnesota were led by radiologists. Additionally, a federal density reporting bill has been introduced in Congress.

Another study released this week in the Journal of Clinical Oncology reported supplemental screening detected cancers, invisible by 2D mammography, in 3,231 women. Half of the 24 additional cancers were seen by tomosynthesis and ultrasound detected almost all.

Connecticut radiologists, once in opposition to density reporting laws, have demonstrated through its data in clinical settings what has been in the literature for more than two decades. Overwhelming evidence exists that it's now time to include adjunct screening in breast cancer screening guidelines for women with dense breast tissue, leveling the early detection screening field for all and protecting the patient-consumer from missed, delayed and advanced-stage cancer. 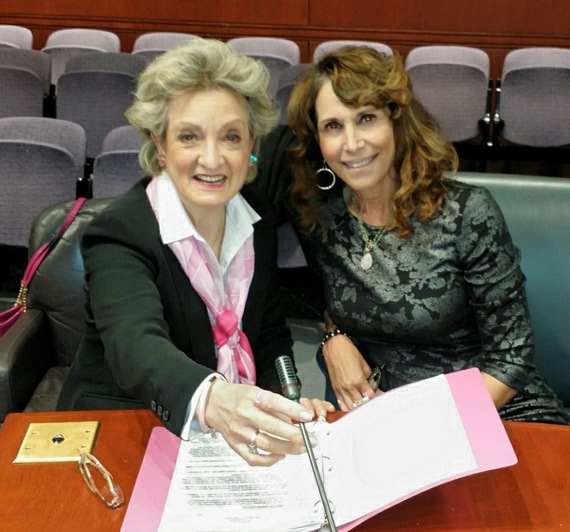 At the Public Hearing with Jan Kritzman whose invasive cancer, invisible by mammography, was detected by adjunct ultrasound because of Connecticut Legislation.