Lock and load, financial rookie. In case you've been lulled into an American Idolized stupor since former New York Governor Eliot Spitzer pulled back the dark curtain two years ago on the biggest economic battle in American history, you're in for some serious surprises. Adjust your mental faculties and aim your eyeballs on this page. Prepare for shock and awe.

If you missed Spitzer's Tiger-like sordid affairs that spilled onto the pages of every major newspaper in the nation in 2008 from an apparent leak by the FBI, you likely also missed the bomb he dropped on the Bush administration in an editorial published by the Washington Post just weeks prior to media frenzy over his involvement with prostitutes.

Today Spitzer is back with a vengeance as he blasts Treasury Secretary Timothy Geithner and Lawrence Summers, the director of President Barack Obama's economic council, calling the duo an "abject failure."

Spitzer is an expert on recognizing failure, and that's not a shot at his career. He foreshadowed America's coming economic collapse in his editorial two years ago and explained how it all came about via a historic battle between all 50 states' attorneys general and the Bush administration over the legality of predatory lending, soon to be practiced by many banks across the nation.

Did you know that every state in the union was embroiled in a war to protect consumers against economic assaults disguised as innocent efforts to assist Americans with major purchases they could not afford? Spitzer revealed how the states lost when the Bush administration, through the Office of the Comptroller of the Currency (OCC), invoked the 1863 National Bank Act, which ultimately trumped all 50 states' lending laws and undermined their efforts to protect the consumer.

Bush may not have won the war in the Mideast, but he apparently defeated the united states.

Surely you heard about such an epic battle!

Here's the latest in the war on economic terror. Hard-hitting journalist Stephen Colbert (just kidding) interviewed Spitzer on Feb. 3. to get his take on the current state of affairs in the government's response to the economic crisis. Spitzer rushed out with guns blazing:

Colbert: Let's talk about malfeasance in our banking system. What's happening right now that me and the great unwashed masses ... should be angry about?

Spitzer: Everything. Absolutely everything.

You should be furious because what's happening is that we are rebuilding the system exactly as it was before.

The same banks, the major investment banks, having taking tens, hundreds of billions of dollars of your money and taxpayer money are now doing exactly what they were doing with it before, gambling with it, taking it out as bonuses and not doing what they should be doing, which is investing in the American economy.

Fox in the hen house

The executive guard protecting the Fed and the banks should come as no surprise. Treasury Secretary Timothy Geithner is the former president of the New York Federal Reserve. Since the New York Fed calls the shots, and Geithner was the main man during the Bush administration's manipulation of the financial industry, it stands to reason that Obama would not adopt Geithner into his administration, which promised change, hope and transparency. But that sort of thinking is rooted in political naivete.

To add insult to injury, Geithner was also in charge of the Fed when AIG was bailed out by the taxpayers and posted big bonuses to executives.

Geithner was the guy closing the door and curtains on transparency when Bloomberg News successfully sued the Fed to open its books and tell the American people what it did with more than $2 trillion in U.S. securities. The Fed refused to cooperate. To this day, that war still rages. 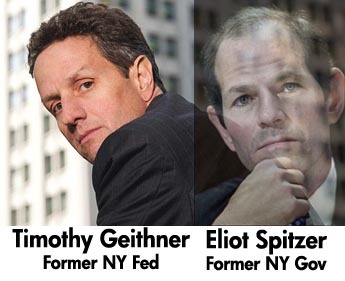 Spitzer spills this fuel onto the battlefield:

The same people who inflated the bubble in the first place are back in charge again. And the same people running the banks who destroyed our economy are still there.

The real problem is that the White House, until last week had not even begun to do what was critically necessary to restructure our financial services sector.

Colbert: Why didn't he do it when he had 60 votes?

Spitzer: Many people were begging him to do it. And I will say very clearly the team of Summers and Geithner have been, in my view, an abject failure. Because what they have done is take all the money and given it right back to the banks without demanding the banks change the way they do business.

Spitzer sums it up cleanly, which is quite the opposite of anything coming out of Washington. Some of the "same people" Spitzer might include on his list are Senate Banking Committee Chair Christopher Dodd, who had an eventual confession of his own when he admitted he lied about his involvement with AIG during the bank bailout scandal. Yet, Dodd is still in the same seat of power, preparing for pomp and circumstance as he is ushered into retirement ... and likely into a financial firm.

Then there's House Financial Services Committee Chair Barney Frank, who admitted to Leslie Stahl in a Dec. 2008 interview that he had no control over what the White House did with funds allocated and authorized by the Congress ... even when the bailout bill was written by Frank himself.

Does that say something about the power of the executive branch and the ineptness and powerlessness of the peoples' representatives? Yet, Frank is in the exact same seat he was in when he made that statement.

Spitzer offers us some resolution to our current state of retreat and surrender:

What we need to do to get money back to the businesses that will invest instead of giving it to the banks so they can play games in the casino economy ... is to constrain their behavior and say, 'If you get bailout money and you're guaranteed access to federal credit,' which is what they have now, 'then you must lend that money, not get involved in proprietary trading and the casino economy.'

Is that the answer? I don't know. Short of cleaning out the closet in Congress, there seems to be little power left for the American people.

We're stuck with Geithner. And because of Congress, we're now stuck with Ben Bernanke again. And if Time Magazine is any indicator, no investigative power is left in the Fourth Estate and national media have accepted the public's lapdog role in this economic fiasco.

Spitzer stated it bluntly: everybody that caused this mess is back in charge again.

Excuse me while I search for my white flag. This war is over.