Elisabeth Moss' new movie opens in a dim room with a closeup of her teary, mascara-stained face. She is finishing a conversation in which she learns her boyfriend was having an affair when her father died. She says she hates him, buries her face in her hands and demands to be left alone. Right when Moss' character seems devoid of energy, when a brief quiet has washed over the scene, she looks up. With a flash of devilish malaise, she unleashes a guttural "Go!" so terrifying it might as well shatter the screen. It is then that the title card announces "Queen of Earth" in blood-red cursive.

The opening moments appear to signal a horrific drama surrounding a romantic relationship with a man. In fact, Moss' best-friend-turned-adversary is another woman, played by Katherine Waterston ("Inherent Vice").

The film, written and directed by Alex Ross Perry ("Listen Up Philip"), is about the disintegration of a years-long friendship. Moss told The Huffington Post that the movie was a treat to make because it was the first time she has been part of a female-dominated project, albeit a dark one.

Told in the vein of the classic genre that Perry describes as "psychotic-women cinema" -- think "Whatever Happened to Baby Jane?" and Brian De Palma's "Sisters" with a touch of "Rosemary's Baby" and Woody Allen's "Interiors" -- "Queen of Earth" is an eerie look at the claustrophobia that sets in when childhood fixtures become relics. The relationship between her and Waterston's characters may be fraught, but it allowed for one of the most harmonious offscreen relations of Moss' career.

"I work with men predominantly," the actress said. "It's just different. I’m always the only girl. This was the first time that the main relationship in the film was with a woman. I have yet to have a really good relationship with a woman in film or in television, but it was a totally different dynamic offset for me. Katherine and I got along so great, and it was kind of awesome for me to be like, “Oh my God, there’s, like, a girl here!”

In Perry's opinion, however, the reason Moss hasn't had pristine relationships with women onscreen is because she isn't attracted to such carefree storylines. It's a claim her résumé supports: Since breaking out on male-driven series "The West Wing" and "Mad Men," Moss has played Jonah Hill's career-driven girlfriend in "Get Him to the Greek," a neglected wife in "On the Road," a troubled detective on "Top of the Lake" and one-half of a floundering couple in "The One I Love."

Much of that work centers on emotional vulnerability, and that is precisely what "Queen of Earth" is about. Except now, Moss plays a character who isn't positioned largely among men. It's the horror-movie version of the road that often diverges in two friends' lives.

When Catherine (Moss) and Ginny (Waterston) vacationed at the same Hudson Valley home the previous summer, Catherine's co-dependent romance made her blissful and unresponsive toward Ginny's bitterness.

Now, the roles have reversed: Catherine is heartbroken and Ginny is reveling in flirtations with the boy next door (Patrick Fugit). But the relationship's fragmentation can't be pinned on the men who flit in and out of their lives. Intimate conversations, often portrayed via menacing closeups, reveal the deep-seated divisions that have cut through the friendship. It is the story of two confidants' inability to step outside of themselves to grapple with the downward spiral for which they blame each other. That springs to life through an urgency that resembles a thriller.

"We could have made it a little bit of a looser, less piercing tone, but we really just went for it," Perry said. "I said this movie could support a few moments where the foucs of the lens is on whoever’s listening, not whoever’s talking. In doing so, that will suggest a lot about this relationship if you’re watching these women react to one another instead of just watching what they're saying."

Perry, who will soon set sights on his first big-budget project by writing a live-action "Winnie the Pooh" update, employs restless camera techniques with precision. But he isn't interested in instilling fondness for the characters. Where "Mad Men" fans rooted for a Peggy-and-Joan union, no one watching the "Queen of Earth" characters self-destruct rests on any sense of hope for these women -- and the movie is all the most honest for it. Still, even though it's Moss' "favorite" movie she's done, she is looking forward to the day when the female rapport is as jovial onscreen as it was offscreen during the making of "Queen of Earth."

"I love those movies, like 'The Holiday,'" Moss said. "I need to make that kind of movie. I need to get into a Nancy Meyers film, stat."

"Queen of Earth" is now open in limited release, with expansions planned throughout September.

Finally, A Movie Where Elisabeth Moss Isn't The Only Woman Around
Indie Summer Movie Preview 2015 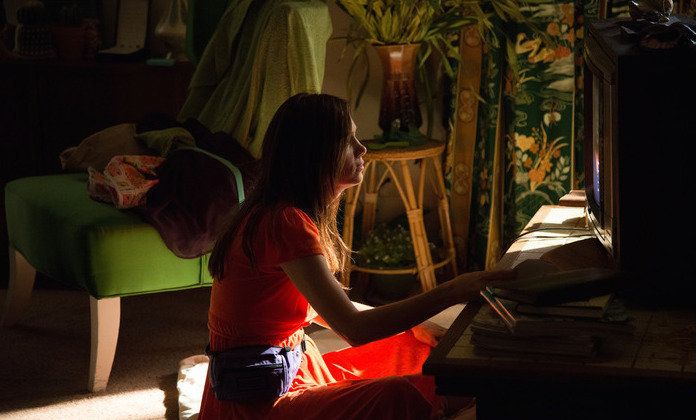