Elisha Cuthbert has proved she's more than just a pretty face, as she shows off her considerable comedic talents each week on the ABC series "Happy Endings."

The Canadian actress has spent more than half her life in the industry, getting her start on "Popular Mechanics for Kids" and "Are You Afraid of the Dark?" But she's best known for her role as Kim Bauer on "24."

Today, the 30-year-old looks both glamorous and sexy in a vintage-inspired one-piece swimsuit posing on the cover of Maxim magazine's March 2013 issue, in which they've bestowed her with the honor of being named "Maxim’s Most Beautiful Woman on Television."

With traditional Canadian modesty, Cuthbert says she's flattered given all the gorgeous women on television, but she'll take a compliment when she's given one.

"I’m not gonna fight anyone about it, though. I’ll accept it with grace. But being on a show with two other beautiful women, this is gonna make going to work very uncomfortable," she told the magazine, referring to her "Happy Endings" co-stars Eliza Coupe and Casey Wilson. "I don’t know, this might be a curse."

A curse might be a bit dramatic, but there's no denying Cuthbert is known for her sex appeal. She can be seen each week taking the dumb blonde archetype to a whole new level, and it's her beauty combined with her knack for physical comedy that makes her so enjoyable to watch. Cuthbert appears to have no sense of self-consciousness when it comes doing things that are less than sexy -- including chowing down on ribs and ending up covered in sauce.

"I think one reason guys liked that character so much is because I didn’t go fully nude. My character really could be the girl of every guy’s dreams, instead of having them see her naked and going, 'Oh, that’s not my thing,'" she explained. "Remem­ber 'Weird Science'? Kelly LeBrock never got naked. She didn’t show you every­thing. I think that’s why it resonated with more men than it probably should have."

For more with Elisha Cuthbert, head over to Maxim. 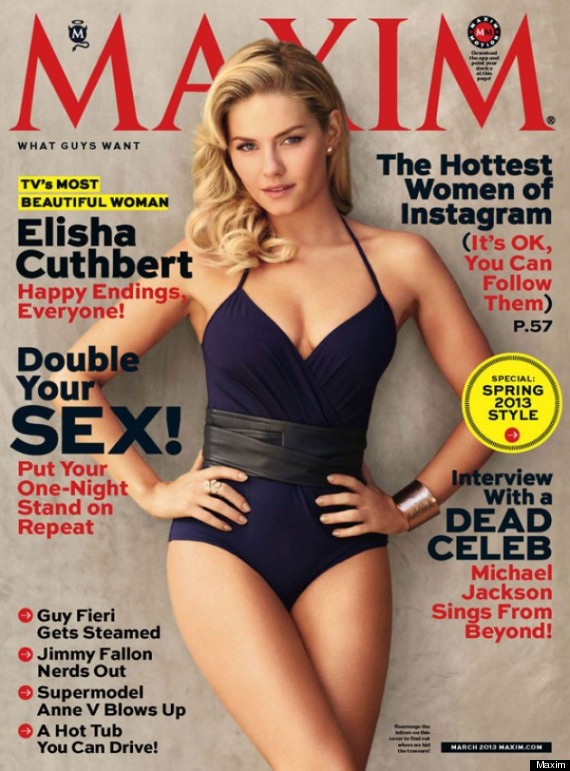