Kansas-based Westboro Baptist Church will be dispatching members of its congregation to protest the funeral of Elizabeth Edwards this Saturday, CNN reports.

The church has generated controversy with its confrontational and offensive demonstrations. "God Hates Fags" has become an unofficial calling card of the group, a phrase they say the world "needs to hear more than it needs oxygen, water and bread." Another Westboro sign, "Thank God For Dead Soldiers," is frequently displayed at military funerals and has created its own share of outrage.

In a promotional flier for the upcoming protest, the church references John and Elizabeth Edwards's son Wade, who died in a car crash in 1996:

"When they were visited from the Most High God with the death of their 16-year-old son, they did not humble themselves before His mighty hand. They reared up in rage, decided they would show God who is boss, and meddled in matters of the womb, resulting in 2 more children -- now motherless."

The church goes on to claim that she is now a "resident of hell, where her rebellion and rage will take full flower."

Elizabeth Edwards, the estranged wife of former Democratic vice presidential candidate John Edwards, died earlier this week at the age of 61 after a long battle with cancer. She is survived by her husband and three children.

Here's the Westboro Baptist Church's memo on their protest: 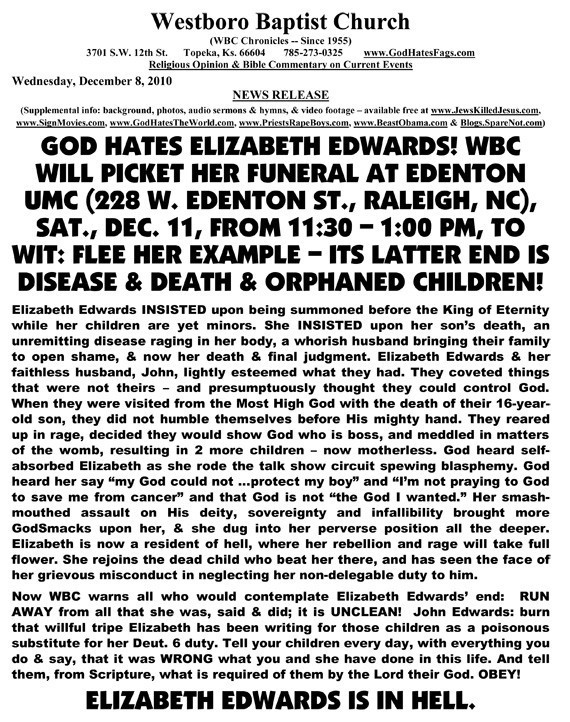