We've often thought about the possibility of the apocalypse, the total destruction of the world as we know it, a sweeping end to the human population along with all the habits and customs we've built up over the years. While we've occasionally envisioned the possible end of days, we often focused on the natural disasters, the fiery judgment day or the unexpected animal revolution that would bring about said grand finale. Never have we thought about, say, the texture of the destruction.

Enter artist Elizabeth Glaessner, whose paintings capture the aftermath of the apocalypse in dripping pigments, rendering mutant faces, globular landscapes and bizarre rituals that both attract and repulse. We normally associate abstraction with increased distance from the subject, yet Glaessner obscures her subject matter in order to bring them closer, to the point where they resemble a premonition, a half-baked memory or a gut feeling. Using pure pigments dispersed with water, acrylics and oils, Glaessner conjures a landscape that's eternally in flux. The layers of paint, so thick they never seem to dry, communicate a continually shifting, post-human world where meaning is forever liquid. 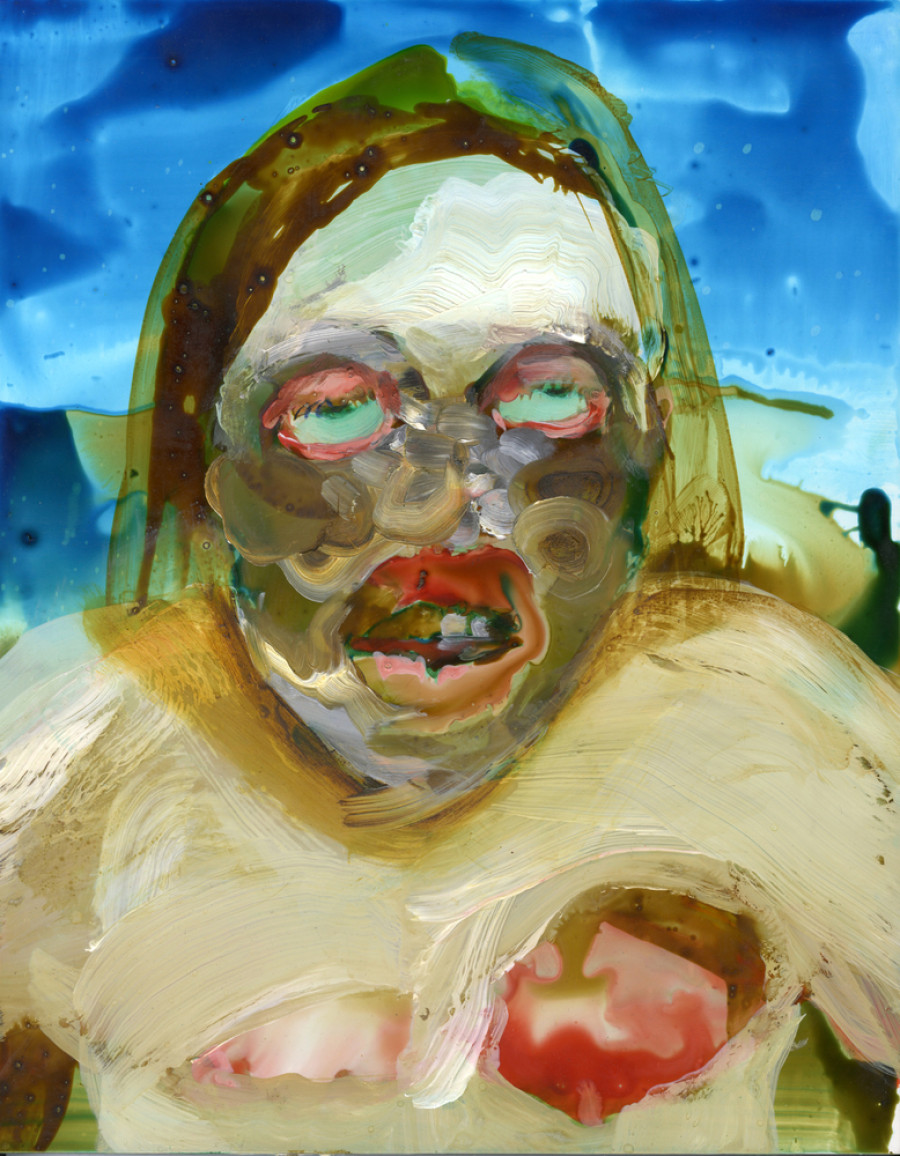 Glaessner's current exhibition, on view at P.P.O.W. gallery, is titled "All this happened, more or less," which you may recognize as the opening line of Kurt Vonnegut's "Slaughterhouse V." The painted world is often described as post-apocalyptic, though Glaessner explained in an interview, "I hesitate to think of it that way because I feel like it's such a loaded term." What Glaessner depicts is what comes after the destruction, a rebirth spawned from decay. It's simultaneously organic and toxic.

"After all humanity has left the world, these creatures and new life forms inhabit the earth," she continued. "They find different clues that we've left behind and recontextualize them to figure out why they are there. It's sort of a search for an identity." Glaessner paints things we've seen before -- boats, trampolines, empty dwellings -- stripped of their purpose and plopped into a liquified zone of uncertainty. Through the eyes of these post-human earth inhabitants, the most banal objects become sites of mystery, portals to potential meaning.

"I'm really interested in flipping rules about the things we feel like are so certain. This is a world where nothing is logical; they place value on things we may not have placed value on." 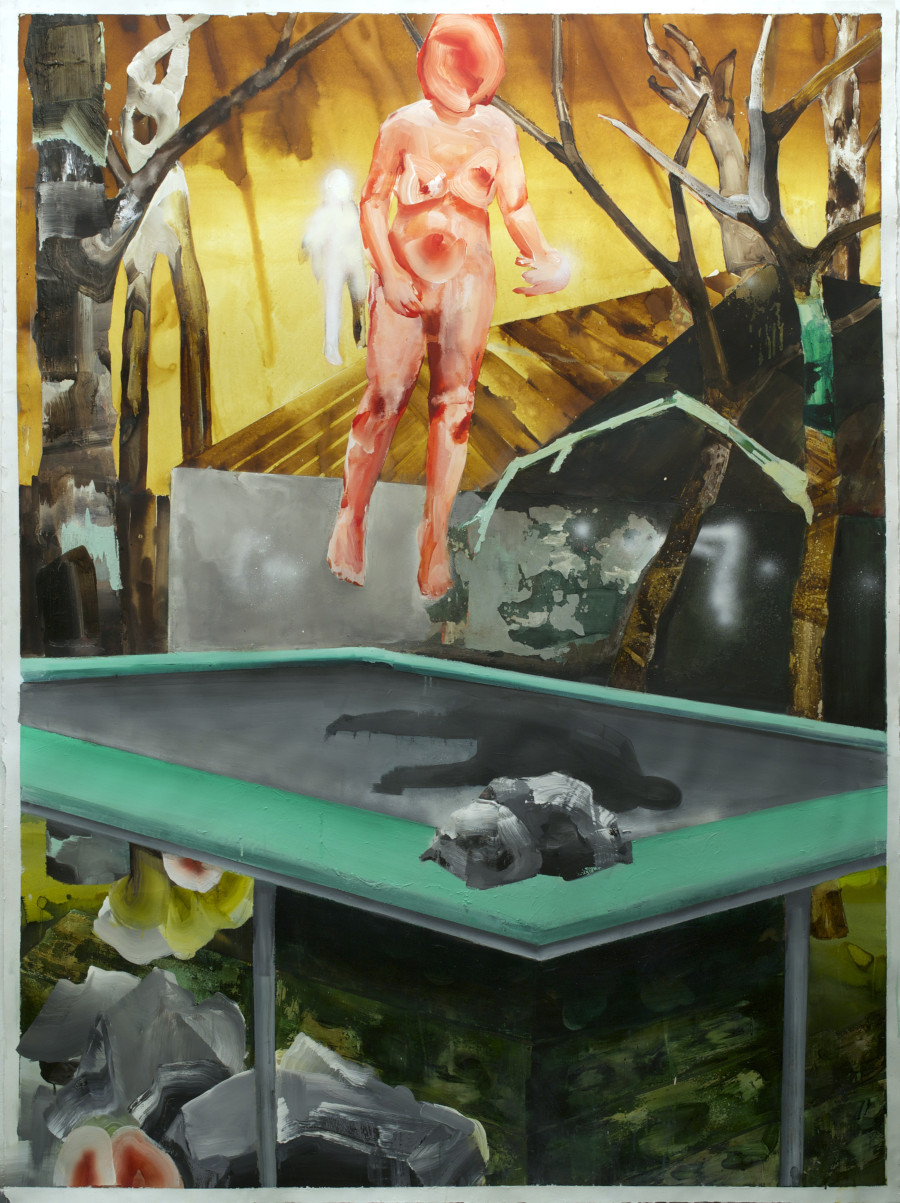 One such object is the trampoline. The frivolous object most commonly found at children's birthday parties is stripped of its associations and left to develop its own mythology. "They find this trampoline and don't understand what our use for it was, so they create this cultish obsession with jumping and bouncing. The purpose of the object is completely transformed." Uncanny rituals sprout from unlikely spaces as our human hierarchy is jumbled up in paint. For Glaesser, the reverence attached to such strange items illuminates how arbitrary our own sacred objects have always been.

"I feel like we as humans put so much importance on such absurd things," she added. "It is absurd that we have these religious rituals based on things that one person decided was extremely important. It's sort of a play on that."

Of all the works on view, Glaessner's portraits are perhaps the most unsettling of all. The semi-human forms, all rendered life-size, resemble plastic surgery patients who've taken their bandages off too soon. Their outsides and insides drip together into a single multicolored mass, bubbling and spewing like a human stew. The occasional recognizable eye or mouth only makes the overall face all the more alien, like a vision you vaguely recognize from childhood nightmares. The melting species is at once horrific and enchanting, a dead animal whose spewed insides form hypnotic shapes. 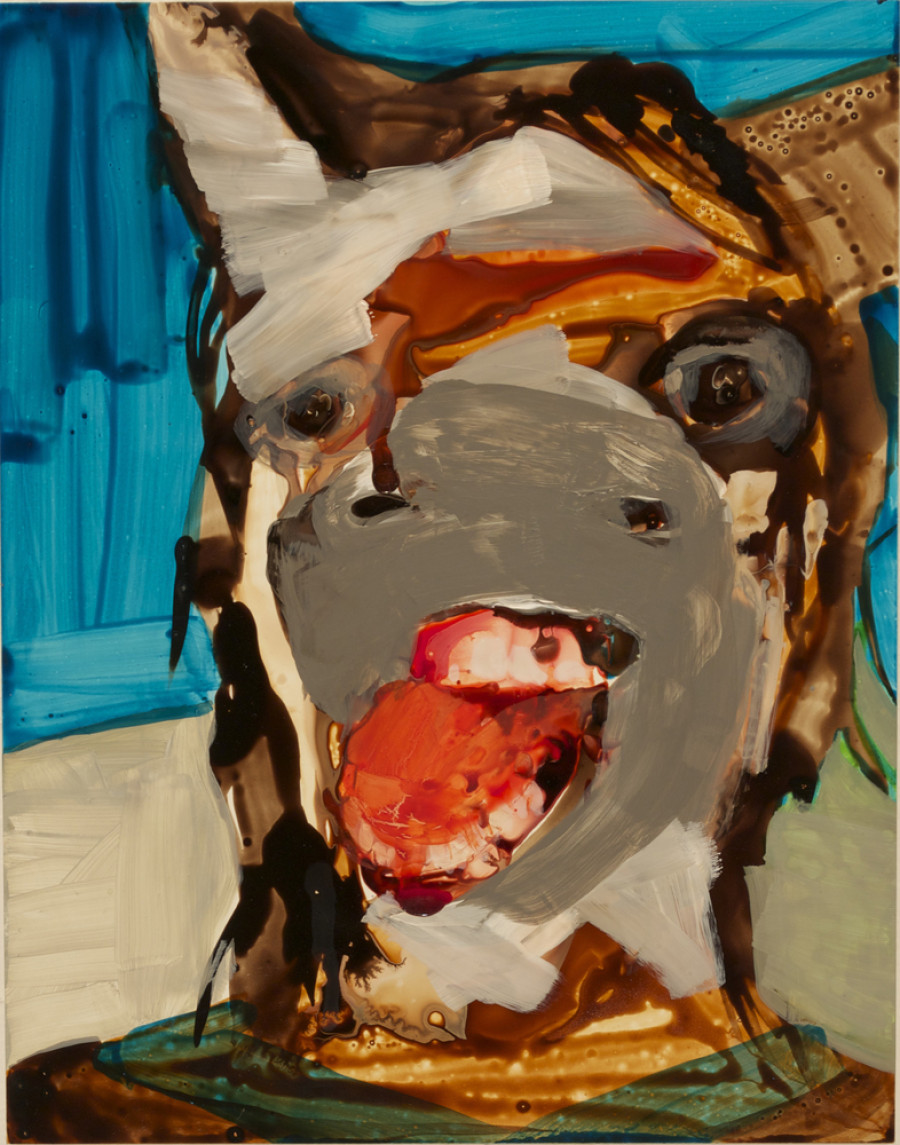 Another standout work from the series is "Donkey Face," a chilling image that injects the animal with the darkest of human emotions. For Glaessner, this obsession with the donkey stems back to childhood. "Donkeys have been an animal that I've loved since I was a little kid, when I used to go on donkey rides. I grew up in Houston and horses are such a Texas thing but I didn't' connect with them at all. I just loved donkeys. They're underrepresented and have this reputation of being this dumb animal that just does our dirty work but they're also revered in a lot of religions."

Citing artists like Caspar David Friedrich and El Greco as inspiration, Glaessner takes the artistic idea of a malleable reality to surrealist heights. While for centuries artists have negotiated how to best balance natural representation with the human impression, she removes the human element completely, instead painting with the hand of an unknown alien form. "A lot of the environments that these paintings take place in, I imagine them as somewhat familiar," she says. "I'll have a lot of forests and trees or a beach scene or something. But I also want it to feel almost toxic. A sort of toxic landscape that can breed different mutations. From all the destruction we've left behind on the earth, new things can be born. What was once toxic and deadly is now birthing a new life form."

Glaessner's swampy scenes capture a moment we often fear yet rarely imagine, when humans are but a distant memory. Her gloriously wet canvases are certainly not tethered in reality, but seem stuck to it somehow like an animal in a swamp.