Actress Elizabeth Hurley calls her line of swimwear for girls "fun" on her website. But parents along with a child protection charity in the U.K. have had a different reaction -- they're accusing Hurley and her brand of sexualizing young girls.

"It is very disturbing to see some inappropriate items in this swimwear range," Claude Knight, the director of the charity Kidscape told the Daily Mail.

Knight points out pieces like the "Mini Cha Cha Bikini," an animal-print two-piece for girls under 8 and the "Collete Bikini," a suit that is held together by a gold ring and is meant specifically "for girls [ages 8-13] who want to look grown up." According to the company's website, "This bikini looks fab with our cheetah ruffled skirt." 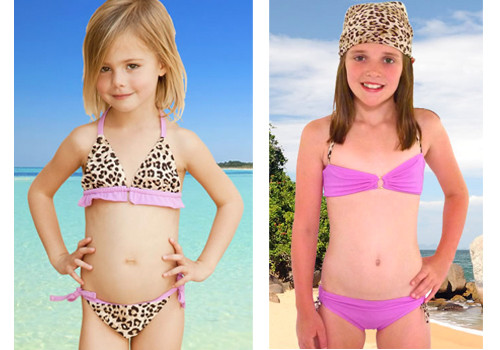 Siobhan Freegard, founder of the community Netmums told the Daily Mail that she knows "a number of mothers who are concerned about the sexualization of their children and would be horrified by their daughters dressing like mini-strippers."

And, their concerns are validated by science. A recent study found that girls as young as 6 think of themselves as sex objects and want to be considered sexy. In an earlier study, Psychologists named clothing as a factor that encourages these youngsters to objectify themselves. This research was particularly disturbing given that "almost a third of girls' clothing for sale at 15 major retailers [had] sexualizing characteristics."

Knight told Sky News that Hurley shouldn't take all of the blame now. Rather, the fashion industry should stop making clothes for kids that are so adult-like.

Jen M.L., a mother of two who blogs at "People I Want To Punch In The Throat" agrees on that front. In a HuffPost blog, Jen says she is "horrified" by clothing selections when she takes her 4-year-old daughter shopping. She recounts a specific Easter shopping trip when "there were several dresses that looked like they should come with a complimentary pole and hooker heels!" But, Jen doesn't blame the industry entirely. She also writes that consumers -- parents specifically -- should stop buying and supporting the production of such items. "If we'd just stop buying this misogynistic whore-wear maybe companies would stop trying to sell it to us."

With regard to Hurley's line, a spokesperson told the Daily Mail that the collection has sold "extremely well." He added, "Most of our customers are repeat customers who report that their kids adore the designs."