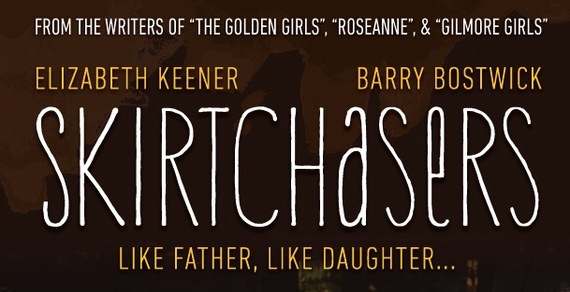 I talked with actor Elizabeth Keener about her new tello Films web series "Skirtchasers" that she stars in with Barry Bostwick ("Rocky Horror Picture Show", "Spin City") as her estranged father and Meredith Baxter ("Family Ties", "Young and the Restless") as her divorced mom. Keener plays Robyn Samuels who is freshly single after a break-up with her long time girlfriend the day before their wedding. As Robyn deals with mending her broken heart she realizes her issues with commitment go way back to her father after the split of her parents. Bostwick plays Damien Samuels her best-selling novelist father who has remarried a much younger woman, starts a new family and abandons Robyn. The five part web series was written by James Berg and Stan Zimmerman ("The Golden Girls", "Gilmore Girls", "The Brady Bunch" movies), bringing over 30 years of writing and producing experience to the project. Amanda Bearse directed four of the episodes with Zimmerman directing one. Bearse has over 25 years of directing and producing experience ("MADtv", "Dharma & Gregg", "Jamie Foxx Show"). She is also known for her role as Marcy D'Arcy in the Fox classic comedy, "Married With Children". "Skirtchasers" is distributed by Christin Baker, co-founder and CEO of tello Films and produced jointly by Baker, Bearse, Bostwick, Zimmerman and Keener. I talked to Elizabeth about what she hoped to accomplish with "Skirtchasers" and her spin on our LGBT issues prior to the Orlando Massacre.
LISTEN:

When asked what her personal commitment is to LGBT civil rights Keener stated:

My personal commitment as a human being is for everyone to have the same rights. I mean we all started as an egg and a sperm, we all started right there. It just becomes convoluted. My personal opinion is that many people, most people, I wouldn't say all but they find ways to elevate themselves by downing other people and if people would just stop in some way, I mean it starts in the home. I think we need to let people know that everyone is equal. I don't care, we can label everything we want; we can have new labels for this and new labels for that; we can do all that stuff but we're all the same and it's just shocking to me that people haven't gotten that yet and you know we're heading for 2020 and people just don't get it or they do get it but they don't care because the only way they can elevate themselves is finding a way to down somebody else. I'm just going to find a way and I hope in my way, I mean politically I'm an actress and I don't know how much in politics people care what I say, but it doesn't matter because we don't live in politics. We live in real life and I'm going to do all I can from my end to get people to see that everyone is the same.

Elizabeth Keener is an actor, writer, producer and voiceover artist. She is best known for her role as the kick ass bar owner Dawn Denbo in Showtime's "The L Word". She has also been in numerous television shows and feature films including Terror Films "The Chosen", ABC's "My Generation" and Nicole Holofcener's "Friends with Money". Keener is the younger sister of actress Catherine Keener. "Skirtchasers" is currently available on tello Films that creates web series specifically for the lesbian/queer community.
For Info & Watch: tellofilms.com