Elizabeth Reaser, an American actress whose standout roles on TV's The Good Wife, Grey's Anatomy and films that include The Family Stone, Young Adult and yes, Twilight, place her firmly above the 'up and coming' status in the viewing culture -- currently stars on Broadway in a role that both elevates and skews her repertoire. Her trajectory continues. 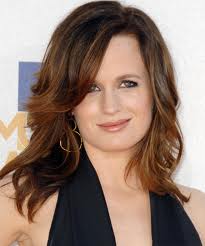 Reaser is appearing in a revival of Paula Vogel's How I Learned to Drive at New York's not-for-profit Second Stage Theatre playing "Lil Bit" -- a thirty-something woman sharing her memories of a childhood defined by the sexual abuse and devotion of her special Uncle Peck, played by the astonishing Norbert Leo Butz, who taught her, among many things, how to drive. 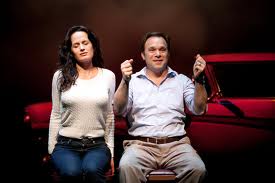 The play tackles pedophilia with the bravery and artistry that would absolutely be required before anyone would actually reach for the Playbill. The actors present a sickening scenario so carefully and intelligently that the case made is almost compelling -- no mean feat -- and we learn how to understand the inexplicable.

Known for having a face that telegraphs sincerity and a more thoughtful kind of beauty, Reaser takes on this role with a sensuality, physicality and thoughtfulness that is just plain exciting to see in these celebrity times. She's that good.

I recently interviewed her about this role and her career to date:

NDP: Talk a little about the sexuality of this role and the physical challenge of the playing both a young teen and a grown woman who is particularly well-endowed.

ELIZABETH REASER: When I first got the offer I spoke with Kate (director Kate Whoriskey) and said 'you know, I really don't have any breasts to speak of.'
I wanted her to know that because it's such a big part of this character and the play, it's part of this girl's whole persona and the way the world around her reacts to her. And since I never experienced that myself I wanted to find a way inside that experience because I wanted it to be authentic. But I realized over the course of working on this role that I could relate this to the other changes I had when I was growing up , when everything feels big and scary and out of order and then I was able to find my way in.

I do have to say it's a very strange thing to wear those fake breasts, there were multiple fittings, which was not my favorite part of the process, and as we kept going along I kept saying ' this is going to be distracting, is anyone going to hear what I'm saying?'

I mean even to me as a woman if someone steps out on a stage or wherever and there are huge breasts in your face, it's a distraction, but then Kate said, 'yes, that's the point,' and of course it is.

NDP: Would you ever want to look like this?

ER: It's a real trip for me, having never experienced that. At times it can feel very fun and very powerful but I just can't wait to get them off at the end of the show.

The one time I took the bra out for a walk on the street to see what would happen I just hated it. People were just staring at my breasts - it was such an uncomfortable experience that I immediately tied up my jacket tight and changed the way I'd been walking.

It must be a complicated experience - but of course there are women who really love their breasts, as they should, and I think it's another whole wonderful thing I'll never really know about!

NDP: Can you speak to another challenge of this role in that that you switch from young adult to young child and teenager throughout the performance?

ER: This has been one of the greatest experiences an actress could have. I'm not going to ever get to play a 13- or 16-year-old in a movie but I have something to say about that age. It was one of the most extreme, scary and wonderful times of my life and probably a lot of people feel that way. Writers and other artists can go back and explore those times through their work and in this role, I can, too.

NDP: I was struck by the sensitivity used to present such a difficult topic. The play ends with a really explicit scene of molestation - and it works - can you talk about that?

ER: That scene is written in a way that I'm an adult in the car with him, remembering that scene as part of my past, and the little girl who is in the scene is somewhere else on the stage. So many people have said to me when that little girl gets molested in the end they actually see her in his lap. They make this transference in their imagination but in reality I'm just sitting on his lap having the memory of it.
It's such a poetic, incredible way to stage it and have it written... this is the secret; this memory is one I don't ever let myself have until this time with the audience.
Paula is very clear that she wrote this role for an adult woman so she could tell a story of abuse but not abuse the audience.

NDP: You've said you think because you have a particularly kind face that you have gotten certain roles but lately haven't the parts have been different?

ER: I've been really lucky, so much about these careers is out of your control. Sometimes I think your face and your bearing and your energy have so much more to do with the jobs you get than the actual work and the time and the effort that you put in, or the talent even. I've often wondered, because I play so many kind, sweet, loving, warm mother types and I think that has something to do with my face. I seem like I would be a nice person, and it's been fun to do.

But I've found, as I've gotten older, I get more roles like the one on The Good Wife. She's not worried about being nice, and is a real femme fatale in some ways - she's out there. Maybe it's because I'm getting older and I'm starting to be more comfortable. People who know me would say they get a kick out of the fact that I'm always playing nice people, not that I'm not a nice person, but it's not a defining element. I was a total bad girl growing up. I was a really rebellious, crazy, wild child so it's funny to people who really know me to see this as out of character.

NDP: You've been cast across some very strong, masculine leading men: Justin Chambers in Grey's Anatomy, Josh Charles in The Good Wife, Peter Facinelli in Twilight, and Patrick Wilson in Young Adult. Do you feel like you're playing opposite or with these guys?

ER: Look at the list of people you just named! I find it to be a joy, those guys are actors and have to be extremely masculine, but they're also actors who really care about the scene and come to the table with real openness and generosity.

I think you have to be able to hold your own. And I also happen to LOVE men, I get on really well with men. My father raised me from the time I was 12 years old. And it would never occur to me that I wouldn't be strong - I wasn't raised like that.

NDP: You're not a regular in a lot of chick flicks, you're not the usual best friend, you're more the girl with the guy...

ER: I'm often uncomfortable with girliness, to be honest. It's weird - I've always found that hard, even in middle school and high school. I don't connect to a certain girliness or talking about girly things - I feel unauthentic and uncomfortable in that world - maybe I'm just more butch than I realize!

I have, however, been fortunate to have a number of great girlfriends. You don't meet as many girls as you do guys in my line of work, so I do cherish my friendships. I'm friends with Elizabeth Banks - she's a great actress but not actressy at all. She's very cool. I adore her.

NDP: Talk about the main differences between television and film versus live theater. At the performance of How I Learned to Drive that I attended a very old man got up from the first row and slowly started staggering towards the exit in the middle of the show. How distracting is that?

ER: I remember that. We were so pissed off! I have to say this experience has taught me to never complain about getting picked up at four in the morning to get to a movie set.