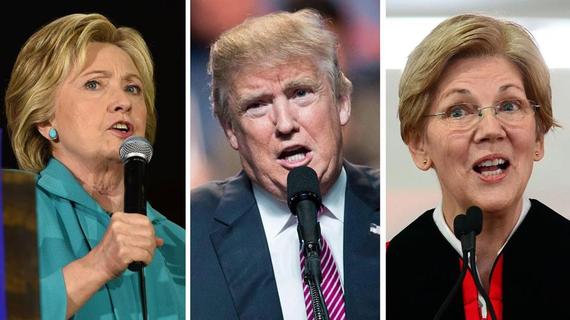 If Donald Trump's strange appetites run towards a three-some, he'd better be careful about getting what he wants. Because he may be about to have his private parts crushed by a pair of tough, powerful women.

Hillary Clinton and Elizabeth Warren made their first joint campaign appearance in Ohio on Monday before a rip-roaring crowd in what has widely been billed as a tryout for Warren as Hillary's VP pick.

If it was a try-out, Warren hit it out of the park, slam dunked it, served up a facial, shot a hole in one--pick your favorite sports metaphor.

"When Donald Trump says he'll make America great he means make it even greater for rich guys like Donald Trump. That who Donald Trump is: the guy who wants it all for himself. Watch out because he will crush you into the dirt to get whatever he wants."

While Donald Trump and Bernie Sanders have drawn rapturous crowds of 10,000, 20,000 and more, Hillary has had a hard time drawing crowds of oven 1,000. Hillary has a she has a serious enthusiasm gap.

And in what's likely to be largely a base election, turn-out could be the main decider of the results, particularly in swing states. If it's a choice between the lesser of two evils, many voters, particularly disaffected Sanders voters, could well stay home. Clinton needs the enthusiasm generated by Warren to make it more likely she'll defeat Trump.

If Hillary doesn't think so, she should take a look at the UK's Brexit vote.

Not only did Warren fire up the crowd with a positive message of fighting for the working class and middle class, as well as effectively slam Donald Trump. She made Hillary better. As pure political theater, Hillary's speech with Warren standing just behind her may have been the best speech she's given in a year of campaigning.

Not to pick Warren as her VP would lessen Clinton's chances of defeating Donald Trump in the fall and could turn her into the David Cameron of American politics.

Warren is far and away the most talented Democrat out there. She's the LeBron James of national Democratic politics.

If you don't believe me, watch any one of dozens of Warren speeches on You Tube.

Start with this epic takedown of Donald Trump for his smears of a Federal Judge and former prosecutor of Mexican ancestry by clicking here:

Warren is the only politician of either party who has shown the political chops to figure out how to put Donald Trump in his rightful place. A brief quote from the above speech:

"Donald, you should be ashamed of yourself, ashamed for using the megaphone of a Presidential campaign to attack a judge's character simply because you think you have the God-given right to steal people's money. You shame yourself and you shame this great country." [Applause]


Warren has a combination of passion, plain spokeness, mastery of policy, and commitment to the little guy that comes along only a few times a generation.

Warren is far and away the most talented person on Clinton's VP Short List, which according to AP has now been narrowed to Warren, Sen. Tim Kaine, and Housing Secretary Julian Castro.

Back in the 1984 NBA draft, the Portland Trailblazers picked center Sam Bowie (who?) over Michael Jordan because they throught they needed a big man for "balance". Those six Championship banners are hanging from the rafters in Chicago, not Portland.

Picking Kaine or Castro might check off a theoretical "balanced ticket" box intended to cater to some subset of voters (Kaine for White men, Castro for Hispanics).

But Kaine and Castro are both Sam Bowies to Warren's Michael Jordan or LeBron James. Safe and boring won't cut it when Hillary already has a major enthusiasm gap.

Warren not only has Super Star talent. She would help unify the Democratic Party and exponentially increase the likelihood that Sanders supporters--particularly younger voters and independents--would show up in November to defeat Trump.

The latest Bloomberg poll shows that only 55% of Sanders 12 million primary voters currently intend to vote for Clinton in the fall. Losing a substantial number of Sanders voters in key swing states could lead to a Trump victory. Putting Warren on the ticket could go a long way to reassuring many of those skeptical Sanders supporters.

The Democratic Party has two, almost equal wings: A centrist Clinton wing and a progressive Warren-Sanders wing. Picking Warren would help unite them into one mighty bird that could soar to victory. Or Hillary could choose a fellow centrist like Kaine and the campaign could flop along on one wing.

The results of this election are largely going to rest on turnout, which in turn rests on enthusiasm. Trump and Sanders drew tens of thousands of enthusiastic supporters to their rallies while Clinton struggle to get hundreds. Hillary's campaign is based not on hope but on fear--That Trump would be too dangerous.

But as the British Brexit vote indicated, in 2016, fear is not enough to defeat an angry electorate. It takes a positive message that can drive turnout. Otherwise, too many Sanders Democrats and Democratic-leaning Independents could well stay home, throwing close swing states to Trump Warren brings the passion and enthusiasm to drive turnout. Hillary alone does not, and the other VP choices add little to voter enthusiasm. Clinton can stay in her bubble believing that fear of Trump is enough. But it's a big risk. Trump could well be the Brexit of American politics

In short, choosing Elizabeth Warren as a running mate would energize Democrats and Democratic-leaning independents of all stripes in a way that a lackluster campaigner like Hillary Clinton never can on her own. She would drive turn-out a make it less likely Trump could triumph

What are the biggest arguments against Clinton picking Warren?

• Wall Street hates Warren and has threatened to withdraw its campaign cash from Hillary if she picks Warren. As Politico recently reported:

"Big Wall Street donors have a message for Hillary Clinton: Keep Elizabeth Warren off the ticket or risking losing millions of dollars in contributions...'If Clinton picked Warren, her whole base on Wall Street would leave her,' said one top Democratic donor who has helped raise millions for Clinton."

But if Hillary bows to such threats and picks a bland corporate centrist like Kaine, it would simply reinforce voter perceptions that Clinton is too close to Wall Street, a message that Trump will be hammering on from now until November. Picking Warren could add a lot of street cred that there's something to Hillary's rhetoric that she wouldn't be the captive of Wall Street

• Putting two women on the ticket would make it unbalanced--It would only increase Trump's support among white men, particularly those without a college degree.

But it would also unleash incredible energy. Think Bill Clinton choosing Al Gore as his running mate. A ticket with two Southern white men was also criticized as unbalanced but proved to be a successful match. Men who wouldn't vote for two women candidates because of their gender are unlikely to vote even for one. And everyone else would be energized.

• Clinton needs to pivot to the center and pick a moderate to appeal to middle class suburbanites.

But with Trump running away with the Republican race and Bernie Sander's unlikely campaign gaining 45% of the Democratic convention delegates, that kind of conventional wisdom doesn't apply much this year. The divide in American politics today is less between left and right and more between inside and outside, top and bottom.

One of Hillary's biggest weaknesses is that she's seen as the ultimate insider who leans towards the moneyed classes, and who changes positions to suit what she thinks voters want. Warren is a champion of the working class, middle class, and poor. In 2016, that kind of running mate is more likely to increase vote totals than another moderate centrist.

• Warren's dynamism might outshine Hillary, who, by her own admission, is not the most talented campaigner.

Well, suck it up Hillary. Your lifetime goal has been to become President. Pick the running made who's most likely to get you there and put aside your ego. Anyway, as the Ohio rally showed, Warren makes Hillary appear bigger, not smaller.

• Warren is more effective in the Senate than she would be as Vice President, an office that FDR's Vice President famously stated "isn't worth a bucket of warm spit." To me, that's the best argument against Warren becoming Clinton's VP. Warren is the most effective Congressional leader of the progressive wing of the Democratic Party, willing to stand up to anyone, even a President of her own party.

But I would assume that Warren is too tough and smart to accept an invitation to be Hillary's VP without negotiating strong assurances that she would be granted a meaningful role in a Clinton administration, like giving her substantial responsibility over the Treasury Department and issues of financial regulation. Without such assurances, if asked to be Clinton's VP, Warren should, and probably would, turn it down.

If that can be worked out, Warren far outshines anyone else on Clinton's VP short list. Any other choice would be Sam Bowie to Warren's Michel Jordan or Lebron James.

And worse, it could make it more likely that "Hail To The Chief" will be playing in front of Trump Towers come January 20th.