Sen. Elizabeth Warren is one of the few politicians who can convey the blood-curdling terror we feel when we contemplate the cataclysm of a Trump presidency. 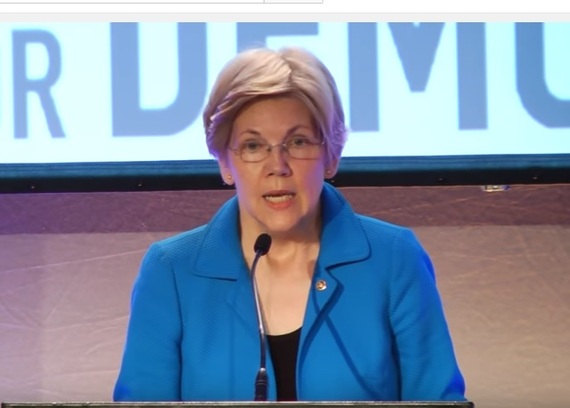 In one epicly awesplendent 10-minute speech, Warren summons the spirit of the original Furies, the Greek goddesses of Vengance, and emasculates the Republican sure-to-be nominee. She singed his golden hair from three-thousand miles away with her firey words delivered on May 24th at the Center for Popular Democracy.

Warren began slowly, first making it clear who she worked day after day to protect:

"People who work hard, play by the rules, but who try to make it in a system that's increasingly rigged against them. You know these people - you fight for these people every day."

She told the story of the Estrada family from Clark County, Nevada. After the low "teaser rate" on their home mortgage jumped, their home was sold out from under them by the bank. That meant the two little Estrada girls couldn't continue to go to the really good school across the street.

"After listening to Mr. Estrada, we drove through town. We saw vacant homes, a pickup loaded with furniture, foreclosure postings, and abandoned construction sites. Evidence everywhere of people like Mr. Estrada who had believed in the American dream, had worked hard to make it a reality, and were watching it all disappear."

That story brought us to the theme of Warren's remarks.

To stand up and say that we will never, ever let these guys wreck the American economy again--never."

Warren directed her ire to the current personification of the greed-is-good mentality, the self-proclaimed billionaire Donald Trump, who bragged in 2007 that he was "excited" for the real estate market to crash because, as he put it, "I've always made more money in bad markets than in good markets."

"The rest of us were horrified by the 2008 financial crisis...[B]ut Donald Trump was drooling over the idea of a housing meltdown because it meant he could buy up a bunch more property on the cheap."

She wondered what we all wondered as the value of our assets shrunk to numbing negative numbers in 2008.

"I'll tell you exactly what kind--a man who cares about no one but himself. A small, insecure money grubber who doesn't care who gets hurt so long as he makes money off of it. What kind of a man does that?"

"A man who will never be President of the United States."

Warren began carving up the flip-flopperism that passes for policy in the Trump campaign.

"Sometimes Trump claims he's tough on Wall Street, tough on the guys who cheated people like Mr. Estrada. I'm sure you've heard him say that. But now he's singing a very different song. Last week, he said that the new Dodd-Frank financial regulations have, and I'm quoting here, "made it impossible for bankers to function" and he will put out a new plan soon that "will be close to dismantling Dodd-Frank." Donald Trump is worried about helping poor little Wall Street?

"Let me find the world's smallest violin to play a sad, sad song."

"We don't know what Trump pays in taxes because he is the first Presidential nominee in 40 years to refuse to disclose his tax returns. Maybe he's just a lousy businessman who doesn't want you to find out that he's worth a lot less money than he claims."

What do we know about Trump and taxes?

"But we know one thing: the last time his taxes were made public, Donald Trump paid nothing. Zero. Zero taxes before, and for all we know, he's paying zero taxes today. And he's proud of it. Two weeks ago he said he's more than happy to dodge taxes...."

Goose eggs, exactly the amount Trump paid in taxes in the only year reported

"Trump thinks supporting them is throwing money 'down the drain".

"I say we just throw Donald Trump down the drain."

Warren drives home her point, honing in on the one thing Donald Trump cares about:

"Donald Trump cares about exactly one thing: Donald Trump. It's time for some accountability because these statements disqualify Donald Trump from ever becoming President."

Warren then ticks off what she will fight for:

"You know the list, you know the stakes, and you know the challenges. But I know one thing. Whether we're talking about Donald Trump or economic change, you can't win if you don't fight.

And now, here's the video:

Senator Warren would make an excellent vice presidential candidate in 2016.  But she'd be an even better President. That won't happen in 2016, but life is long, and she has the brains, the passion and the ability to communicate that the progressive-liberal base salivates over.

All images via WikimediaCommons