WASHINGTON -- The polling bump produced by the Democratic National Convention appears to have helped more than just President Barack Obama, as two new polls in Massachusetts also show a parallel rise in the standings of Democratic Senate candidate Elizabeth Warren.

The second new poll, from Public Policy Polling (PPP), a firm that conducts surveys for local Democratic campaigns, gives Warren a 2-point advantage (48 percent to 46 percent). Warren's margin on the new PPP survey represents a net gain of 7 points from its previous poll, conducted just before the Republican convention, which had Brown ahead by 5 (49 percent to 44 percent).

The WNEU poll used live interviewers to call for a full week, from Sept. 6 to Sept. 13, beginning on the final night of the Democratic convention. PPP's automated recorded-voice methodology called for three days, from Sept. 13 to Sept. 16.

Despite the different methods, the two polls produced very similar snapshots of attitudes toward the two candidates. Both show net positive job approval ratings for Scott Brown as they did earlier in the year, and both now show net positive favorable ratings for Warren. Both also indicate improved ratings of the rivals following the party conventions and months of campaign advertising. 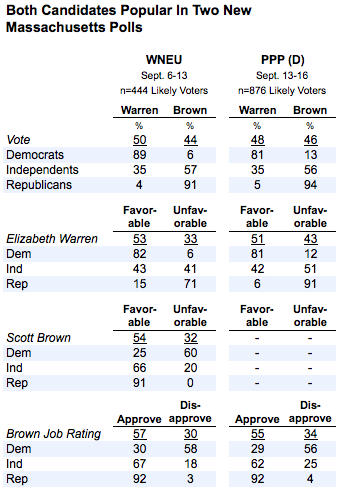 As always, these readings are just a snapshot, and the Massachusetts race remains one of the closest in the nation. When combined with other public polling, the trend lines of the HuffPost Pollster polling chart indicate a race essentially tied with roughly 46 percent for each candidate.