What better way to understand Elizabeth Warren's bid for Massachusetts Senator to replace Scott Brown than conduct a teach-in, much as the Occupy Wall Streeters are doing. She stands for what we all need, after all, more knowledge on how to combat the huge levels of social and economic inequality that have arisen over the past 30 years from a corporate and Wall Street culture that glorified profits over social responsibility, or even honesty.

Professor Warren's specialty at Harvard is contract and bankruptcy law, after all, so she has seen firsthand the damage that fine print in mortgage contracts and wholesale deregulation of financial oversight can do. A New York Times profile spelled out some of her agenda.

"Ms. Warren talks about the nation's growing income inequality in a way that channels the force of the Occupy Wall Street movement but makes it palatable and understandable to a far wider swath of voters," said the Times. "She is provocative and assertive in her critique of corporate power and the well-paid lobbyists who protect it in Washington, and eloquent in her defense of an eroding middle class."

But it's more than that. She is a teacher, and so teaching the public why the middle and lower classes have lost so much of their wealth is a priority. In fact, their loss of wealth is why economic growth has been slowing historically. Part of it has to do with the massive deregulation of industries begun by President Reagan in his war against government; waged on the promise it would raise everyone's prosperity level. But the result instead was it took away the income and wealth of 'everyone' and gave it to the wealthiest on the thinnest of rationalizations -- that they were the real job creators, not the consumers who bought their products.

Does that mean we are helpless victims who have to be protected by Big Government, unable to take care of ourselves? No, in All Your Worth: The Ultimate Lifetime Money Plan written with daughter Amelia Tyagi, she spells out her beliefs on individual responsibility.

"You can't count on good old-fashioned hard work the way your parents did. Go to school, get a good job, do your work, don't go crazy with spending, and everything will work out, right? Not anymore. That advice may have worked in your parents' day, but today you have to be smart with your money. Not just a little smart, but super smart. You have to learn the new rules -- the rules nobody told you and nobody talks about. And you have to learn them fast."

And that in fact is what her teach-ins are about--learning the new rules, as well as working to change them to be more consumer friendly. What are they? Firstly, a major rule change was abolishing usury laws that have enabled national banks to charge as much as 30 percent on credit card debt. In another bestseller with her daughter, "The Two-Income Trap", they spell out why the middle class has lost ground. Deregulation has allowed banks to write their own rules, with no concern for their own customers' welfare.

For instance, the 2005 bankruptcy laws have means testing -- only those with below median incomes for their states can file for Chapter 7 Bankruptcy, which abolishes all unsecured debt. So struggling households saddled with catastrophic health care costs (because health care costs aren't controlled), have to sell everything they own to even file for bankruptcy.

That is the real reason the standard of living of all but the top 1 percent has fallen. And it hurts all of us. Richard Wilkinson has spelled it out in a recent TED conference, and his book with Kate Pickett, The Spirit Level. Countries and states with the highest income inequality have the highest crime rates, illness outcomes, and most environmental degradation -- you name it -- as well as least social mobility that would allow greater opportunities to improve themselves. 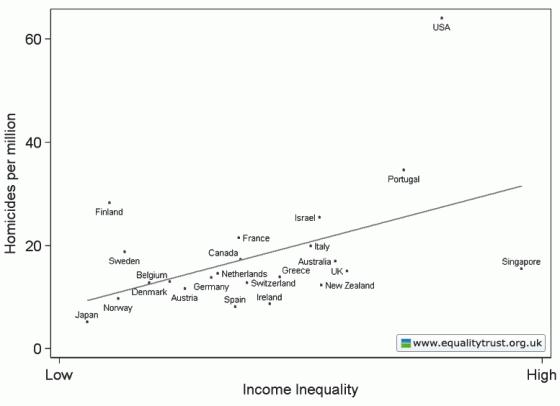 Why such a shift from equal opportunity in just 30 years back to an era of Social Darwinism that was capitalism in its earliest form? It is in part due to the huge amount of wealth we have amassed. Former Fed Chairman Alan Greenspan has said:

"It is not that humans have become any more greedy than in generations past. It is that the avenues to express greed had grown so enormously."

Wealth generates its own temptations, in other words, and so removing the barriers to its acquisition can overwhelm even common sense when dealing with severe financial crises.