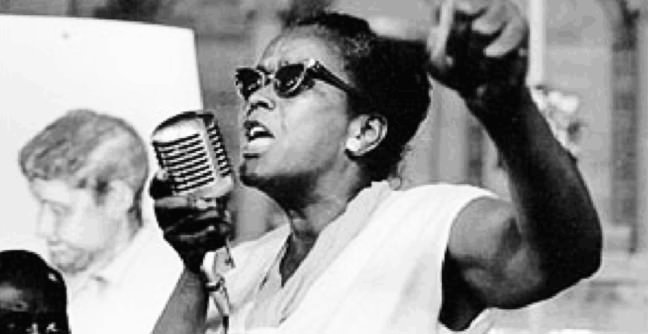 In perhaps one of the most important biographies of a civil rights leader published, Professor Barbara Ransby has conveyed the epic life and struggle of a woman whose sheer skill, leadership, and ability to mobilize the marginalized and dispossessed to full participation in their fight for human dignity is almost unprecedented in American history. In her book, Ella Baker & The Black Freedom Movement, Professor Ransby documents the life of Ella Baker, a black woman born to a middle-class family in North Carolina in 1903 who, after witnessing the staunch spiritually based dedication of her mother to serving the poor in the South, transforms into a sheer force of will that worked with all the major civil rights organizations of her time, and helped mobilize to create two of the most crucial to the Civil Rights Movement: The Southern Christian Leadership Conference (SCLC) and the Student Nonviolent Coordinating Committee (SNCC).

Before we continue to heap a single praise or Hosanna to men like Dr. Martin Luther King Jr., Wyatt T. Walker, Stokely Carmichael, Malcolm X, Paul Robeson, Thurgood Marshall, W.E.B. Du Bois, or any of these other gentlemen we idolize as embodiments of masculine heroism, we should know about one woman, of many, who had more wisdom, courage, and vision then almost all of them: Ms. Ella Baker.

What made Baker's method of organizing both effective and revolutionary is that it completely dismissed the traditional paradigm of leadership that had plagued the black community from its earliest history in North America, stemming mostly from the black church: Charismatic masculine leadership based on oratory and exhibitionism. Baker believed in empowering the most common person, whether a sharecropper, teenager, or illiterate vagrant with skills to make demands on the political establishment. Baker believed that people did not need fancy leaders with degrees and pedigree to tell them what was best for them. She believed in giving people the power to choose their direction and make demands, and put pressure on institutions without depending on big shots with fancy suits. In her book, Professor Ransby notes:

"At every opportunity [Ella] Baker reiterated the radical idea that educated elites were not the natural leaders of Black people. Critically reflecting on her work with the NAACP, she observed, "The Leadership was all from the professional class, basically. I think these are the factors that have kept it [the NAACP] from moving to a more militant position."

Moreover, Ella Baker was very critical of the hotshot black preachers who seemed to mesmerize their audiences with soaring oratory, then leave and expect others to implement an agenda. As Ransby further notes, at one point Ella Baker asked Dr. King directly "why he allowed such hero worship, and he responded simply, that it was what people wanted. This answer did not satisfy Baker in the least."

Ella Baker did not mince words on her thoughts of Dr. King's leadership style and vocally spoke out on its limitations:

"Baker described [Dr. King] as a pampered member of Atlanta's black elite who had the mantle of leadership handed to him rather than having had to earn it, a member of a coddled "silver spoon brigade." He wore silk suits and spoke with a silver tongue.

[...] In Baker's eyes King did not identify enough with the people he sought to lead. He did not situate himself among them but remained above them.

[...]Baker felt the focus on King drained the masses of confidence in themselves. People often marveled at the things King could do that they could not; his eloquent speeches overwhelmed as well as inspired."

The limitations of this charismatic masculinity noted by Ella Baker are profound, particularly in today's political age when we have a president like Barack Obama who often tries to channel the traditions of charismatic leadership and oratory from the black tradition. Ironically, Obama has been as anemic in delivering real change and effective at stifling progress as Ella Baker worried Dr. King would have been. So perhaps in a strange twist, we have found a similarity between King and Obama after all.

Often in America, when discussing prominent black trailblazers who fought the injustices of segregation and racial oppression, we see the same images of a variety of men. I somewhat jokingly call them our superhero black male icons. This phenomenon mimics the more noxious western patriarchal fascination with viewing history as a series of events being shaped and guided by the hands of a strong capable man embodying all our fantasies about leadership, masculinity and sometimes fatherhood.

The danger of such imagery is that it often both obscures and denies the scope of nuanced factors, issues, and circumstances in shaping the events from which our societies were born. Furthermore, such narratives often exclude any consideration of female agency in effecting the great events that have transpired over time.

Barbara Ransby should be applauded for putting a halt to this tradition and setting the record straight with her towering biography Ella Baker & The Black Freedom Movement. As a man still troubled with patriarchal sexist notions, this book opened my eyes to ways in which the role of women are often neglected and intentionally obscured. Let us all read the story of Ella Baker and make sure such injustices do not continue.