Another day, another journalist puts their foot in their mouth.

The dust has hardly settled from the melee surrounding the Dutch magazine Jackie, after it referred to Rihanna as a "N-word Bitch." One would think that racial slurs and stereotypes would quickly be stricken from our vernacular (at least for a while) following that fiasco.

However, the French version of Elle magazine has found itself right smack in the middle of their own racially charged incident.

Just last week on the publication's website, writer Nathalie Dolivo penned a blog posted entitled "Black Fashion Power." And what initially seemed like Dolivo's attempt to praise the black community for their style prowess, unraveled into a string of controversial, stereotypical and insulting statements.

Dolivo points out Solonge Knowles, Janelle Monae and Nicki Minaj as sartorial stars and suggests that their style along with the rest of the black community have been significantly heightened thanks to Michelle Obama. She writes:

“For the first time, the chic has become a plausible option for a community so far pegged [only] to its streetwear codes.”

So, being chic and sophisticated beyond jeans and a t-shirt has only been an option for black people since 2008 when Michelle Obama became First Lady?

Such sweeping generalizations and misguided comments are what perpetuate the stereotypes we constantly fight to keep at bay.

Dolivo continues to dig herself into a deeper hole when she refers to blacks with style (and presumably money) as the "black-geosie." Oy!

"But if in 2012 the "black-geoisie" has integrated all the white codes [of fashion], they [do so not] literally. [There] is always a classic twist, with a bourgeois ethnic reference (a batik-printed turban/robe, a shell necklace, a 'creole de rappeur') reminiscent [of] the roots. It [has] shifted, [it is] new, desirable, powerful."

Did we read that correctly, "white codes of fashion?" Whether we accessorize with ethnic items or not, it is by no means a deviation from guidelines set by the white community--rather it's simply an interpretation of personal style.

Although the post was written in French and has since been translated to English, hundreds of comments from French readers on the blog's website suggest that nothing has been lost in translation--they are just as shocked by the rhetoric as we are.

It's hard to believe that there aren't any black journalists that could have written on this subject with intelligence, dignity and finesse. The lack of diversity on magazine staffs and in newsrooms has been an ongoing issue. Varying and appropriate perspectives are needed in order to avoid misguided articles such as these.

UPDATE, January 24: Elle France has removed the blog post--but has not issued a statement.
UPDATE, January 28: Elle France's editor-in-chief, Valerie Toranian apologizes for the post, stating: The article was “full of good intentions” but might have been badly expressed.
UPDATE, February 3: Dolivo has apologized for the article, saying it was an attempt to take a 'positive' look at US society and style. 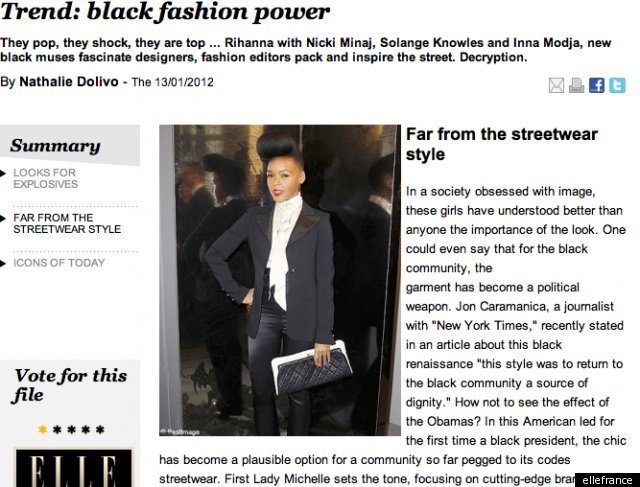