Ellsworth Kelly died Sunday. His death came just a few days short of making it to 2016 but the math will be accurate when you look at the dates on the museum placard next to his painting. His unique, groundbreaking art is owned by almost every art museum of significance in the world. He made radical simplicity a monumental endeavor.

I was a big fan of Kelly's work for years right up until the moment I detested his ouvre. His peaceful outlines of space and saturated hues were blissful until they became the checklist-checking wall-filler asserting that a collection was "historically thorough" in whatever McMuseum one would find them in. It was once exciting to turn a corner and see a shape's simplicity sing with pure color. It became a shrug to pass yet another one on the way to reading a wall label of something that didn't readily announce its presence with a sigh.

This is not a case of the jadeds, either. The work of his from the early 1960s that would mix colors with each other always seemed fresh; there was one at the new Broad Museum I saw a few months ago that reminded me of the heights Kelly reached. But the over production of his goddamn shapes and more shapes, filled in with Hoboken housewife designer colorshades just reverse-multiplied his legacy into a less prestigious place -- a great one should really know that the ugliness of commerce stains things. Great work strangled into mediocre repetitiveness by the market and the international curatorial tug of overproduction that turns every great presentation of simplicity into simpleminded one-percenter wall decor.

But I had a soft spot for anyone who changed the way art could be perceived and was excited to go to an otherwise rubberstamped show of his when a friend assured me Kelly would be present at an opening of his prints at the Gemini Gallery on Santa Monica Boulevard in 2001. Of course, prints on paper were the most offensive commercial venture in all of it. The man's strength was in delivering subtlety in scale -- an almost impossible thing to accomplish -- bombast and serenity, the visual art equivalent of the Marshall Plan, a good big thing. When the framed shapes were shrunk down to paper all the impact of their delicate color was sucked away as if a leech had been attached to the once great notion of this artist's eye. 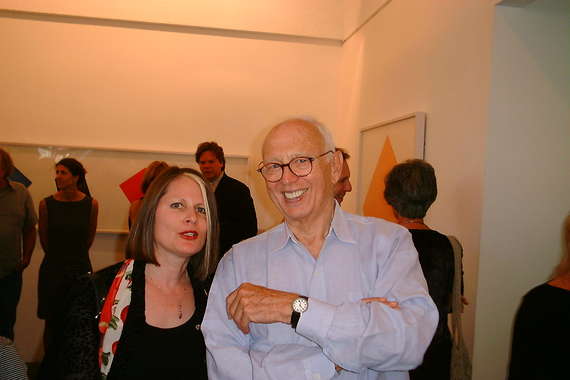 The reception that afternoon was crowded and there was the master standing in attendance, smiling as he greeted well-wishers. I had taken the liberty of dressing for the occasion by wearing a kitschy teeshirt with an old Saturday Evening Post cover illustrated by Norman Rockwell.

What artists of Kelly's generation did in eviscerating the maudlin, sentimental patriotism of Rockwell that coated the visual culture of the United States in a sticky-sweet ooze from sea to shining sea well into the 1960s is a triumph which is lost on the world today. And Kelly was one of the most extreme in the field, perhaps the most extreme visual artist this side of Barnett Newman and Agnes Martin in his use of reduction without elimination as a way of finding (and more importantly delivering) a painting's essence and its essence alone.

The tidal wave of possibilities that radical American art delivered basically drowned the beach head established by the post-Ashcan domination of Rockwell et al. It was an obliteration of Americana that mirrored changes in the larger culture. It really was a war and Ellsworth Kelly really won it. He won the war of what art should look like.

So I made sure to wear that shirt to the opening just to see if it would set the old guy off. He was talking to an acquaintance and I asked if I could take their picture. He was smiling and complying when he noticed the shirt and he wasn't having it.

"I'm gonna smile for your picture and then I'm going to tell you why that shirt of yours has to go!" I clicked the camera and acted dumb. Kelly schooled me, he told me that art like Rockwell's was what had been wrong with America, that Rockwell was a jingoist and that his art bred conformity and that conformity bred fascism.

He was animated and serious, detailed and not smiling any longer. Much more than I had bargained for. He told me he did not have any more time for me and walked away. A half hour later he saw me and was incredulous "You're still here? Can't you take a hint?" and again he just walked away.

I wasn't offered a defense in his home court. But later as I was making my way to the door he smiled and said "I hope you dress better the next time I see you." It was a peace offering from the top. The shirt went to Goodwill less than a year later.

I look at the date on the photo and it is 8-11-01... a month before the world changed forever, a month before the type of blissful freedom Kelly manifested in his work went up in smoke forever. The last month of America and its poet of purity was as feisty as ever.

I was at dinner with friends tonight when someone brought up the news of Kelly's passing. I told this story and Carol Diehl, who lived near Kelly, pointed out that the artist lived quite close to the newish multimillion dollar Norman Rockwell museum in upstate New York. That must have gnawed at his craw, putting the stake through the heart of the American Empire in his prime only to see the vampire blink and rise so many years later.

What if Kelly was the other side of the same coin though? America seen as a faceless, souless corporate oligarchy decorated with meditations on the simplest forms and fascinating colors in order to never deal with the world it impacted. Pair that with Rockwell's cloying narratives sermonizing about the character expected of a people in a nation where the leaders do not share their basic values.

The two of them, Kelly and Rockwell, enemies yet neighbors, vampire and vampire-slayer, antithetical Americans reflecting the strides and the strife of the country. Old Ellsworth would hate being mentioned in the same breath as Norman, but you can bet Rockwell would share the disfavor and turn over in his grave even a little bit more.