Famed novelist Elmore Leonard died Tuesday morning after complications from a stroke at his home in Bloomfield Village. He was 87.

His researcher Gregg Sutter made the announcement. The news was shared in a post on Leonard's Facebook page:

The post I dreaded to write, and you dreaded to read. Elmore passed away at 7:15 this morning from complications from his stroke. He was at home surrounded by his loving family. More to follow.

Commenters like David Scott expressed their sorrow: "A bright spot is that we still have his books; a dark spot is that there will be no more."

Leonard was born Oct. 11, 1925 in New Orleans, though he moved to Detroit as a child. He spent most of his time as a resident of nearby Bloomfield Twp. He famously captured his hometown in a often-cited quotation:

“There are cities that get by on their good looks," he wrote. "Detroit has to work for a living.”

Last year, Leonard won the National Book Foundation's Medal for Distinguished Contribution to American Letters. His 10 rules of writing have been spread widely, particularly the famous piece of advice that encapsulates his style: "If it sounds like writing, I rewrite it."

As a personality, Leonard was as enigmatic and engaging as the hustlers, gamblers, cowboys and con men that littered his writing. He even had a crime world-sounding nickname: "Dutch." In interviews, he often talked about his characters like they were real people. To him, in a sense, they were -- or the fun was in pretending.

"I’ll know that I’m going to have fun with them, and that’s the main thing," he told VICE. "The writing has to be fun or else forget it."

And his incredible output of work seemed to mirror the blue-collar ethos of Detroit, his adopted city. He reportedly worked from 10 a.m. to 6 p.m. every day in a small basement office that looked more like a prison cell than a famous author's writing room.

Leonard has written 45 books and was at work on a 46th, according to the Detroit Free Press. His crime novels have won the praise of readers and critics.

They're known to many through their film and television adaptations, like "Get Shorty" and "Out of Sight." His novel "The Switch" is the latest to hit the big screen; Isla Fisher, Jennifer Aniston, Mos Def and Tim Robbins star in the movie that is set to debut at the Toronto International Film Festival.

He most recently published Raylan in 2012, a novel that follows U.S. Marshal Raylan Givens, who is also the star character of the TV series "Justified" on the F/X network.

In a review, the New York Times lauds his "grammatical bravery," as well as his subject matter:

"Our best crime writers are sometimes our most astute social novelists, concerned as much with our country’s ills as they are with sensational homicides, and even in the midst of his rat-a-tat narrative Leonard doesn’t forget this." 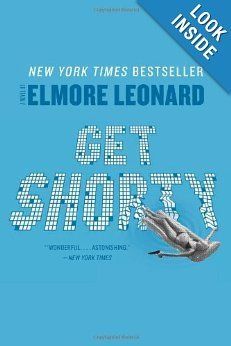 1 / 10
Get Shorty, 1990
<em><a href="http://www.amazon.com/Get-Shorty-Novel-Elmore-Leonard/dp/0062120255/ref=sr_1_2?ie=UTF8&keywords=get+shorty&qid=1377014771&s=books&sr=1-2&tag=thehuffingtop-20" target="_blank">Get Shorty</a></em> might be Leonard's most famous novel. If you haven't read it, get your hands on this book (even if you dug the <a href="http://www.rottentomatoes.com/m/get_shorty/" target="_blank">1995 film starring Danny DeVito and John Travolta.)</a> The taut tale of Ernest "Chili" Palmer, a seriously cool Miami loan shark betting big on Hollywood, and Bo Catlett, a gangster in sheep's clothing who'd prefer Ernest dead, is one of the rare Leonard novels with a happy-ish ending. As for that title? You could read the whole book before the meaning clicks.
Amazon