Tesla CEO Elon Musk should get out of the car business, according to one Wall Street big shot.

DoubleLine Capital founder Jeff Gundlach, considered one of the most influential people in the bond market, said the billionaire entrepreneur should focus on building the battery systems that power his luxury electric vehicles.

“If I was Elon Musk, I might go to all the other auto companies and say, ‘I’ll make you a deal, I’ll get out of the car business, but let’s set up a long-term deal on you buying my batteries,’” Gundlach said on Saturday in a radio interview with Bloomberg View columnist Barry Ritholtz.

Skip to 19:54 to hear the interview segment focused on Tesla:

“If I was running BMW, GM or Ford, I think I’d be open to the idea of just buying the batteries from Tesla.”

Gundlach first suggested Tesla concentrate on batteries back in May, saying they "could be wildly transformational the way electricity and electromagnets were." Gundlach has suggested that Tesla is a better stock to own than Twitter. Last year, on the other hand, he declared he wouldn't buy Tesla stock, calling it "cultish."

Batteries could become the backbone of Tesla’s future business as the company urges rivals to use its technology and breaks ground on a planned "gigafactory."

Last month, days after Musk announced that Tesla would free up most of its patents, BMW and Nissan confirmed to The Huffington Post that they were in talks to work with the electric-car company, though they declined to give details on any nascent deals. Analysts said the company wants to set the industry standard for powering rechargeable vehicles.

So far, the new Mercedes B-Class electric car will feature a Tesla battery and drive train, a move Gundlach said Musk should replicate with other companies.

The company has plans to build a “gigafactory,” which would be the biggest battery-making facility in history. At its peak, Tesla estimates it would create 500,000 lithium-ion packs a year] -- more than all batteries produced worldwide last year. 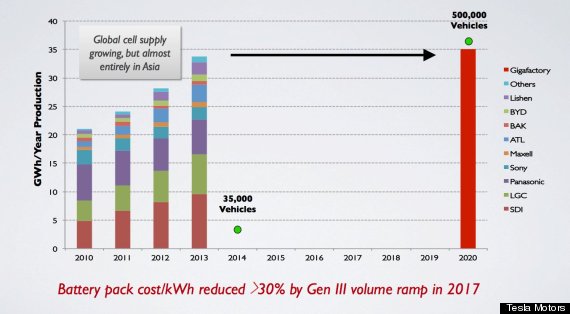 Musk recently sparked a “bake-off” between Arizona, Nevada, New Mexico and Texas to see which state could cook up the best offer to entice Tesla to host the $5 billion factory.

Barring a brief hiccup after weak fourth-quarter earnings last year, Wall Street adores Tesla. The Silicon Valley company's stock price has soared in value compared to auto giants such as Daimler, General Motors and Toyota. In his interview with Ritholtz, Gundlach suggested the run might not be over.

"I'm not convinced that it is overvalued, relative to the potential," Gundlach told Ritholtz. "Now, it's high risk: What's the percent chance that it turns into this world-beating ubiquitous technology? Maybe it's 30 percent or something. But the payoff for that would be incredibly high."

Tesla was rattled last week by the death of a driver who crashed after stealing a Model S sedan from a service center in Los Angeles. Though this was the first-ever death of a Tesla driver, the car split in two, stoking old fears over safety.

Still, Musk seems unlikely to back out of the car business.

Musk last month told CNBC that he planned to work with Tesla for his entire life and insisted he still had plans to roll out an affordable consumer model.

“I’m really feeling good about being able to produce a compelling mass-market car,” he said.