On October 20, 2015, Consumer Reports pulled their recommendation of Tesla's Model S, Elon Musk's electric car. Once touted as the best-performing car they ever tested, now it has a "worse-than-average" reliability rating. Actually this might not be that big of a blow to Tesla, yet. Typical Model S customers are folks who own two, three or more cars. The Model S is a novelty. If it doesn't work, they have something else to drive.

But Tesla is making a huge bet that their upcoming Model 3 will strike it big in the mainstream market with a price target of $35,000. That's a market where drivers often rely on a single car as their sole means of transport. One that would be less forgiving of reliability problems. If Tesla can't get it right now, can they satisfy an even more demanding crowd? Tesla's stock dropped 7 percent.

In 2004 at Burning Man, a yearly gathering in the Nevada desert, someone erected a 30 foot wooden pole with a dancing platform on top. Dozens of people failed to climb the pole. And then there's another who gives it his try. He doesn't look like someone who could climb it. And as he's trying, suspicions are confirmed. He's terrible and looks like he's about to fail. He hugs the pole the whole time as he squirms and inches his way up. With sheer determination he reaches the top of that platform.

Who was he? Elon Musk.

That's one of many stories you can read in Elon Musk's recent biography from Ashlee Vance. And if you read some of these stories, like how he battled through getting fired from Paypal or survived a close-to-death case of malaria, you might come to the conclusion that it's his perseverance that will help him see Tesla out of this current predicament. But you'd be missing a key ingredient that makes Elon who he is.

My daughter is 17 months old. One of my favorite books we read to her is: This Moose Belongs to Me by Oliver Jeffers. It's a funny tale of a boy named Wilfred who finds a moose and declares the moose is his pet. He names him Marcel. Wilfred gives Marcel all sorts of rules on how to be a good pet. And Marcel does some of them very well. Marcel helps Wilfred stay dry in the rain, and helps him get to hard-to-reach places like apple trees. But Marcel is very poor at following most of the other rules. For example, he doesn't stay close to home. So Wilfred leaves a trail of string behind them as they play to help him find his way back.

One day, Wilfred and his moose happen upon a lady in the forest far from Wilfred's home. The lady starts calling the moose to her: Rodrigo! She thinks the moose is her pet. Wilfred is shocked. This isn't her moose. It's his and his name is Marcel! But the moose happily joins the lady to eat an apple she has for him despite Wilfred's protests.

Wilfred fumes and storms off home. But on his way, in his anger, he gets tangled into the string he left behind. Now he's stuck, lost in the woods, and it's becoming night, where all sorts of terrible things could happen. The outcome looks grim.

But along comes the moose who helps Wilfred out of his predicament and carries him back home. Wilfred begins to realize he never really owned the moose. So he and the moose reach a compromise:

The moose would agree to all of Wilfred's rules... whenever it suited him.

Wilfred realized the bigger goal was having a relationship with a wild moose at all. So instead of persisting at a myopic goal, Wilfred had to learn to adapt. First he adapted his surroundings to fit his predicaments. Marcel wouldn't stay close to home, so he used string to help retrace his steps. But even that wasn't enough.

Wilfred couldn't bend the moose to his will, so instead of persisting, he quit being so narrow sighted, took a step back to figure out what he truly wanted, and adapted himself to achieve it.

A lot of people are also now familiar with one of Elon Musk's other businesses: SpaceX. Making rockets, Elon has his eyes on sending humans to Mars. Many folks don't realize SpaceX originally started with a goal of sending mice to Mars to watch them procreate.

When Elon realized the high costs and the minimal practical value of the experiment, he adapted. He came up with a new idea to send a greenhouse to Mars to study how to grow things in the harsh environment. So he set out trying to get a rocket to ship the greenhouse. But then he bumped into a new obstacle.

Russia was the only place to buy a suitable rocket, and the Russians knew it. And, just like any monopoly, they were going to milk him for as much money as they could.

So he took a step back from his narrow sighted goal, realized what he truly wanted was to get humans into outer space again on a regular basis, then he quit the project all together, and adapted. He decided to just build his own rocket. But rockets cost a lot of money, a lot more money than even Elon has. He decided that SpaceX needed to become the go-to company to help folks launch small objects and satellites to space.

Except, one more wrinkle. Turns out, there isn't enough money in the launching-small-stuff-to-space business to keep SpaceX afloat.

I was emotional about it and disappointed. I'd anticipated a flood of orders but, after eight years, they just did not come.

So they had to adapt. They started making bigger rockets. And now SpaceX is getting into the business of making their own telecommunications network in space.

On and on they adapt. Elon Musk doesn't just persist at a tiny goal. He creates big, large goals, and he adapts everything else around him and himself to reach them.

Guppies are one of the most popular fish in freshwater aquariums. Makes sense. They look gorgeous and come in so many colors. They are also found all over the world in wild habitats.

But you might wonder, how could these beautiful fish even survive in the wild? These aren't big fish. They aren't poisonous. They don't have any defense mechanisms that make them vicious fighters. Wouldn't their bright colors actually attract predators who'd destroy their populations? 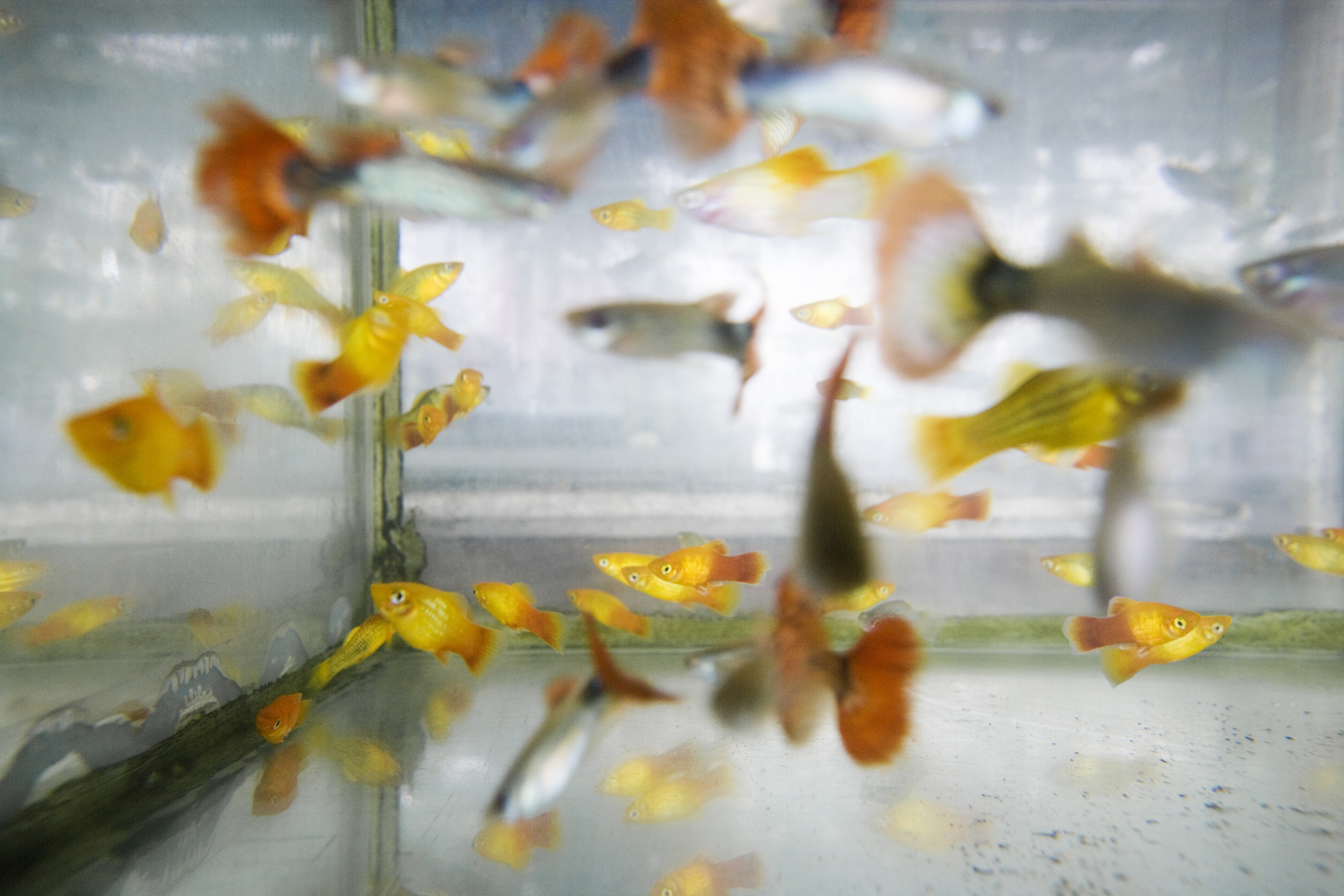 John Endler, an evolutionary biologist, made an interesting discovery in the 1970s as he examined guppy populations in Trinidad, an island off the coast of Venezuela. Endler found that guppies, even living in the same exact body of water, had remarkable variety.

As he studied them closer he noticed that many of the guppies upstream who were protected from predators via a waterfall barrier, were shiny, and beautifully colored. Downstream though, below the waterfall, where predators were more prevalent, the guppies were drab, and had coloring that closely matched the muddy environment of the water.

He was seeing evolution play out in a single body of water. That's unusual. Evolution usually plays itself out over many years. So he and others followed his discovery with numerous experiments using guppies to show how evolution works in a laboratory. He would recreate these conditions, and as soon as he introduced predators in a pool of guppies who were beautifully colored, the guppy population would quickly become drab and their scales would begin to match whatever was the material the laboratory pool was made of.

But if you think a little deeper about evolution, that's actually a bit depressing. Because it wasn't an individual guppy that was adapting. That's not how evolution works. Guppies, by the luck of who their parents were and what DNA they had, were either born shiny and brightly colored or drab. It's just that if a predator was eating beautiful guppies, the drab ones lived on, procreated, and made more drab guppies. It was the population that was adapting.

It's too early to call Tesla's fate. But if you've watched them already, they aren't just making cars. They sell their batteries to consumers and businesses. They sell their car parts to other large car companies like Toyota and Daimler. They're making their own "gas stations" of the future. And before you know it, they might even have the energy company of the future -- turning their factories into giant energy stores and supplying electricity from solar energy.

Elon will figure out how to adapt the company to get back their reliability. But I also wouldn't be surprised to hear one day if Tesla gave up selling their own car altogether and focused instead on moving other car companies over to electric. Because that's a bigger end goal.

Elon persists through obstacles. But he's also a quitter. He changes. He adapts. If something gets in his way, instead of plowing through it, he steps back to look to see if there's actually something much more worthwhile to attack. And he adapts himself to go there. He gives himself more opportunities. Because here's the thing. In this story...

We aren't the guppies. We're the scientist.