Therapy dogs are a wonderful part of the healing process for many patients, but Elsa, the paralyzed pit bull, is more than just furry comfort for the patients she visits -- she is a lesson in perseverance.

Elsa became paralyzed after a stroke, Global News reported. Now she and her owner, Kelly Dann of Vancouver, British Columbia, visit the GF Strong Rehabilitation Center once a week, where patients can spend time with the lovable pup who has been through the grueling process of rehabilitation therapy herself.

In 2010, Elsa was rescued by the British Columbia SPCA, along with 26 other dogs, from an abusive and cruel situation, according to The Furever Network. She was brought, malnourished and sick, to HugABull Rescue and Advocacy Society in Vancouver. Eventually, at 5 months old, the puppy was adopted by Dann and her husband Nik.

When Elsa was just over a year old, she suffered a spinal cord blockage resulting in paralysis. But, after 16 months of hard work and rehab, Elsa relearned how to walk (although she still needs the assistance of her "dog buggy" sometimes).

Now, Elsa is a certified pet visitation dog, bringing a message of hope to people recovering from serious injuries, Global News reported. Along with some sloppy dog kisses and a big pit bull smile.

"Initially I just wanted to keep Elsa active and stimulated after her stroke so this was a way for us to do something together," Dann told Global News. "And my hope was to maybe inspire some people that have gone through a similar situation as Elsa to never give up and hang in there." 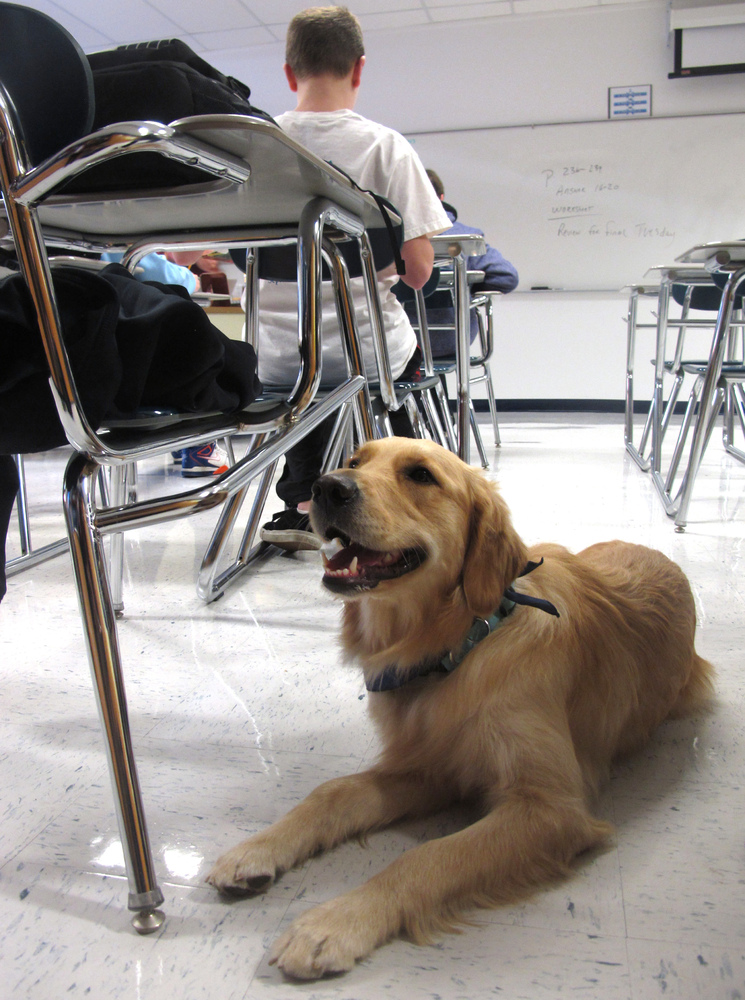 1 / 5
In this Jan. 14, 2013 photo, Junie, a "therapy dog" at Prospect High School, lies on the floor in a classroom in Mt. Prospect, Ill. The 18-month-old golden retriever is one way this school is trying to help students cope with a rise in stress, anxiety and panic attacks. Many say these issues are a problem in schools across the country. (AP Photo/Martha Irvine)
AP