Mathematicians play a version of "Six Degrees of Kevin Bacon" using the great Paul Erdős (1913-1996) as the center of their universe. Erdős (pronounced "air-dish"), besides being an unusual fellow, was the most prolific mathematician in history, and worked in such a broad range of subfields that nearly all professional mathematicians have an "Erdős number"—the degree of separation based on a chain of co-authors—less than 9.

Some of Erdős' greatest contributions were in graph theory, an ancestor of the network theory that's been applied to everything from protest movements to the collaborations in the mathematics network his name has come to represent. So when a group of mathematicians came together earlier this year in one of the highest profile academic boycotts since Aristotle left Plato's academy, Erdős was in the air.

It's not just his technical contributions that peg him as a sort of godfather figure for the protests; his anti-authoritarian views anticipated those of the boycott by decades. "Nothing bothered Erdős more than political strictures which did not allow for complete freedom of expression and the ability to travel freely," Middlebury College mathematics professor Dr. Peter Schumer (Erdős number=3) wrote in his essay, "The Magician of Budapest". The "political strictures" that reformists believe stand in the way of open borders and free markets within today's mathematics are upheld not by nations, but publishers. 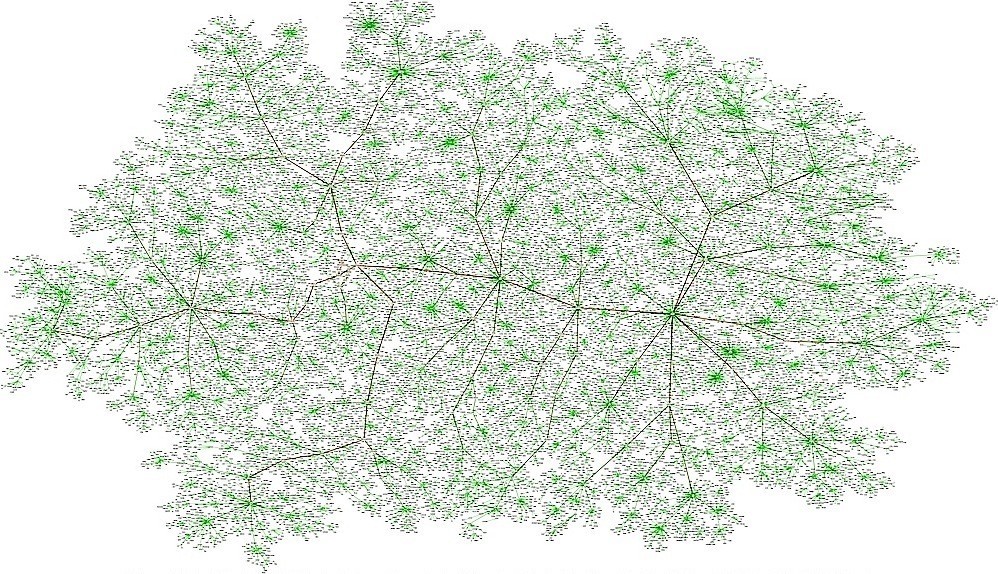 A visualization of the Mathematics Genealogy, a network of mathematicians based on thesis advisors. Created by Dr. Yifan Hu. Reprinted With Permission Of AT&T Labs. All Rights Reserved.

The boycott of the academic publisher Elsevier, created and supported most widely by mathematicians, represents a potent application of the math network. Dr. Timothy Gowers—Cambridge professor (Erdős number=2), Fields Medalist and instigator of the boycott—appealed to the network's collective bargaining powers in his call to protest, noting that "the more of us there are, the more socially acceptable it becomes."

The stakes of the Elsevier action, known also as the "Cost of Knowlege" protest, have been explained at length elsewhere.

But the heart of the unrest isn't journal pricing or authors' rights, it's who gets to control the intellectual 'stamp of approval' on published papers. Certainly, the scientific enterprise needs an easy way to verify the legitimacy of new research. But, as Dr. Hal Abelson, MIT professor of computer science (Erdős number=3), wrote on his Cost of Knowledge pledge, "With the moves of these megapublishers, we [are] seeing the beginning of monopoly control of the scholarly record." Publishing giants like Elsevier, Wiley-Blackwell and Springer carry some of the most reputable journals across various fields, and reformists accuse them operating a sort of credibility cartel in which researchers must participate for the sake of their careers.

This breaks down for research subjects with smaller and more closely-knit communities. One well-known effort was the 2006 mutiny at Elsevier's Topology journal, when the mathematicians on its editorial board simultaneously resigned and formed the open-access Journal of Topology. Any loss in prestige was only temporary; Dr. Zoran Skoda, professor of mathematics at the Ruder Boskovic Institute in Croatia (Erdős number=5), noted on the MathForge forum that the move from Elsevier "passed with understanding of the community that the editors are essentially the same and the new journals... are gaining momentum to the top class accepted journals."

Others have suggested similar tactics to overthrow particularly egregious journals outside of mathematics. But the mathematicians' network may be best suited to the job. As Tyler Neylon (Erdős number=4), the math PhD candidate who created the Cost of Knowledge website, told the the Chronicle of Higher Education, "I'm concerned that other fields, such as biology/medicine, may be more entrenched in a profit-supportive culture, so that it may take much longer to realize widespread support of open access there."

Mathematics isn't even close to the most tightly-knit academic field, but this independence from industry interests—combined with the relatively small size of the community—makes collective action possible.

Organized mutinies wouldn't be able to take down larger, more general journals (see "Effects of the Resignation"), but Topology wasn't exactly a niche publication, and there are plenty of even more specialized journals that may be able to follow in its footsteps.

Gowers himself had doubts about repeating the Topology editors' strategy with other journals. But, after all, he wrote his manifesto in January, before the outpour of support for the boycott. If the "Cost of Knowledge" signals, as Neylon put it, "an inflection point in academic publishing," then reformists have cause for optimism.

Mutinies like the one at Topology rely on the fact that mathematicians don't get jobs, mentorships or lower Erdős numbers from journals— they get those things from other mathematicians.

One system being developed to leverage the power of such professional relationships is Dr. Christopher Lee's Selected-Papers Network ("SP net"), a sort of Pinterest for peer-review in which researchers with common interests across the sciences can subscribe to one another to share 'must-read' articles and reviews.

Lee, a UCLA Biochemistry and Molecular Biology professor (Erdős number=4), told the Huffington Post in an email that "the promise of the SP net is to unleash faster innovation and creation of new boundary-crossing research communities that are currently blocked by the blindspots of the current journal system." In other words, researchers in cutting-edge fields won't need to get a stamp of approval from a big publisher; they can start by getting it from one another. "If each person can just identify a few people who share their research interest," Lee said, "the SP net will quickly knit together the whole network that brings together that new research community -- a new field is born."

With the rise of interdisciplinary research throughout the sciences, the demand for a tool like the SP net is high. Mathematical collaboration in particular is growing at an increasing rate, according to a 2005 study by Oakland University mathematics professor Dr. Jerrold Grossman (Erdős number=2).

Filtering out the crackpots is still essential, but there's no reason 'niche' science needs to be synonymous with 'fringe' science in the new model. This would be a welcome change from traditional models, where reviewers are often "forced to guess whether (and how much) [a] paper will interest other audiences that lie outside [their] personal interests and expertise," as Lee explains in his paper on the SP net.

These inefficiencies affect young mathematicians disproportionately, and some efforts have already been made to compensate. Dr. Michael Lacey, Georgia Tech mathematics professor (Erdős number=3), explained one technique in an email to the Huffington Post: "As Editor of a journal... I accepted papers by younger authors which were not necessarily the best paper, but looking back at them in a few years time, I could see that these authors had continued to grow in their research, building a strong reputation for themselves." Lacey said he's not alone in this practice, and cautioned elsewhere that such encouragement mechanisms "seem to be missing from some of the discussion of the Elsevier boycott, and the peer review that might replace it."

The SP net would, at least, put more control in the hands of sympathetic elders. UC Riverside mathematics professor Dr. John Baez (Erdős number=3), commented on MathForge, "If someone like [Fields Medalists Edward] Witten or [Michael] Atiyah or [Pierre] Deligne did this, you can darn well bet that hundreds of people would turn on their computer each morning to see what papers those guys liked."

Over the short term, Lee hopes his network will integrate with journals and article search utilities: "The SP net would then be recommending journal articles," he says. Over the longer term, however, the network could even establish itself as an alternative to traditional publishers: "If journal publishers alienate researchers, as has happened with Elsevier and the Math 2.0 movement, then researchers could publish directly via the SP net (it is a peer review and distribution mechanism)."

In both protesting journals and adopting new technologies, coordinating participants is essential. Both efforts hinge on the established figures, who can convince their students it's worth it to sign a pledge or use a new website. And in both cases organizers need to know which nodes carry the most weight. Understanding the dynamics of these problems will be difficult, but if anyone can apply the principles of network theory to their own predicaments, it is the mathematicians.

Even if they succeed, of course, the mathematical enterprise will be far from perfect— some good ideas will still come at the wrong time or fail to reach the right people. But the efforts discussed here are only the first steps. Making more streamlined and more general theorems is in mathematicians' blood. The network can always be simplified.

Erdős himself summed it up:

"My mother said, 'Even you, Paul, can be in only one place at one time.' Maybe soon I will be relieved of this disadvantage. Maybe, once I've left, I'll be able to be in many places at the same time. Maybe then I'll be able to collaborate with Archimedes and Euclid."

Author's Note: All Erdős numbers were determined with the American Mathematical Society's "Collaborative Distance" tool on MathSciNet. Dr. Lee didn't have an entry himself, but he wrote a paper with UCLA statistics professor Ying Nian Wu, whose Erdős number is 3.