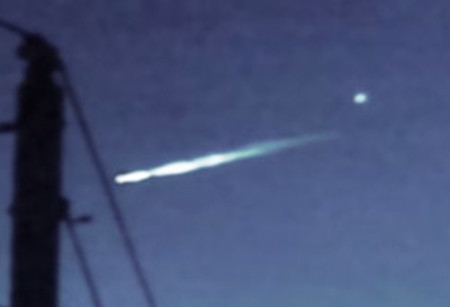 Okay, so we are all tired of those just-another-UFO-video thingies that take the Internet by surprise every now and then. Most of them are falsified, or just turn out to be a crashing meteor. But here's something I found that was a little unorthodox, perhaps even interesting. You be the judge.

Now that you have seen the video, your question must be: "What am I looking at?" Here's what:

I was driving home after work when this UFO or whatever you call it caught my eye. I pulled over in front of somebody's house to film it. I would have got a better shot but I didn't want to jump these people's fence. Anyway I don't know what the hell to make of it. Couldn't have been a plane cause there was no noise. And I never heard a crash after, either. The orb thing flew straight up into the sky and disappeared. Sorry I didn't film that. I didn't know what to focus my attention on.

Says Ken Roberts in his YouTube description of the video. though it was first posted up on Reddit. The video would have been just another meteor crash mistaken for a UFO, except when the video reaches 0:17, something weird happens. The UFO ejects out a white orb-like glowing object, which then shoots out into another direction. The orb could have just been space debris ejected out by the meteor, except it just shoots upward into the sky, instead of settling down like debris should.

The video can just be a hoax, or maybe -- just maybe -- it is evidence of real UFO phenomenon. What do you think?

Of course, you can always visit All About Occult for more.