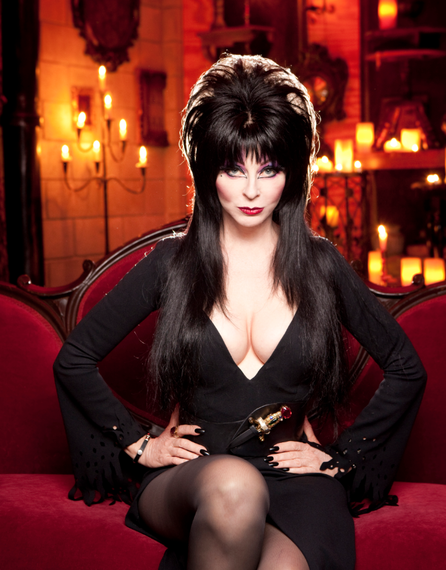 Elvira, Mistress of the Dark, has been rocking Halloween 365 days a year for more than three decades. And it seems that Cassandra Peterson, the woman behind the campy vampirish persona, may have some family roots to thank for that plunge into a costumed life (and plunging neckline) that has made her a lasting international success. Peterson recently shared her story with me for my iTunes podcast Whine At 9.

Cast as the host for a local television show featuring B-rated horror movies, Peterson was charged with designing her own spooky look to match the theme. She snagged a revealing form-fitting little black number, vampirey-but-vampy-inspired hair, and black nail polish (which was far from popular in the '70s and '80s). Within weeks, the ratings soared and her phone was ringing off the hook. People couldn't get enough of Elvira.

Peterson's costume choice for Elvira helped cement her popularity and the Elvira brand. And it seemed to come quite easily to the woman who grew up surrounded by make believe. "Growing up, my mom and my aunt had a costume shop," laughs Peterson. "There's probably no coincidences here -- the fact that I'm now wearing a costume for a hundred years."

Peterson worked at the family costume shop every Halloween and delighted in the fact that she always had the best costumes as a kid. In fact, she became quite adept at choosing the outfits that would make her a Halloween winner. Not surprisingly, Peterson always preferred channeling the sultry characters.

"I had the best costumes of any kid, starting in second grade," notes Peterson. "I won every contest. Whatever was hot on TV... I remember my first costume contest I was dressed as Miss Kitty from Gunsmoke... I won a hundred dollar bond... every year I was dressed as a character... from Dream of Jeannie... or... Ginger from Gilligan's Island -- whatever was the hot character."

Walking in Elvira's shoes for 35 years hasn't been without it's midlife challenges. Peterson didn't envision she'd still be wearing 6-inch heels and plunging necklines at this stage of her life, but no one does it better and with more enthusiasm. She works out six days a week and is booked solid with appearances during the Halloween season, which now begins in September and extends even into early November. She's landed on The Tonight Show seven times and on more TV sitcoms and reality shows than I can count. Peterson admits that, for Elvira, "Halloween is every day."

Because of her Halloween-related character and the nonstop work schedule, Peterson has little time to personally celebrate the holiday that is still her favorite. "It's the most fun holiday... There's no responsibility... You get to dress up as your fantasy character and go out and have a blast."

So is Cassandra Peterson's favorite fantasy character Elvira, Mistress of The Dark? Of course! Still, the Queen of Halloween can't help but joke that sometimes she'd like a fantasy costume that "covers every inch of my body." Somehow I doubt there's a flannel bathrobe and bunny slippers in Elvira's immediate future, but maybe for Christmas...