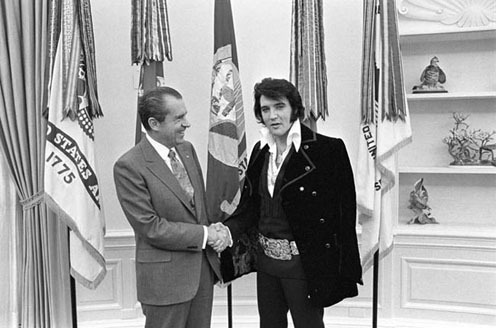 Elvis's presence was in the building at the Loews hotel in Santa Monica for the annual eight day American Film Market (AFM) hoping to convince the 1,670 buyers from over 70 countries to buy the rights to the upcoming film "Elvis and Nixon" starring Michael Shannon as Elvis and Kevin Spacey as Nixon. The film about the King of rock n' roll's famous meeting with President Nixon in 1970 was one of the 432 films on offer to exhibitors looking to find movies that will fill their theaters.

Nixon's cinema biographer, Oliver Stone, also had a film based on a real person, Edward Snowden, seeking international sales. This still unnamed, topical production, with Joseph Gordon-Levitt as the leaker is set to get underway in January. Snowden, like Elvis, shook things up in the culture but the films about these 20th and 21st century icons weren't the only pictures being offered with highly recognizable casts.

William H. Macy, Shia LaBeouf, Nicholas Cage, Jackie Chan, Kim Basinger, Susan Sarandon and Allison Janney were all headlining movies or, as they're referred to by the dream merchants at the Market, "content" designed to appeal to an international audience.

"I'm absolutely convinced that content drives everything," said director and producer, Brett Ratner at one of the companion conference series offered as master classes for attendees.

Rattner was less convinced that the reliance on stars to get people to theaters was still viable. "Used to be people went to see Tom Cruise now it's Superman," he said.

Instead of star power, unless it's Robert Downey, Jr., Brad Pitt or Angelina Jolie, it's the power of the intellectual property or IP, not the stars that are moving the needle. This explains why studios rely on high budget genre movies like Superman, Batman, Transformers and the Hunger Games and have mostly abandoned anything but the so-called "tent pole" films that attract massive audiences.

"The middle has fallen out," said Rattner who agreed that the studios have abandoned films in the $25 to $40 million range.

It's either films costing $70 million and up, the "top tier" said Clay Epstein, senior vice president, Arclight Films, or low budget film projects done by independent producers. These typically are horror, crime, thrillers, action, romantic comedies or other genres that cost anywhere from $500,000 to six or seven million.

There's a healthy international market for these films but for this tier it's still "all about cast," said Epstein. "Six of them are white males."

Having Bruce Willis, Nicolas Cage, Clive Owen, Jake Gyllenhaal, Jason Bateman, Sylvester Stallone or Arnold Schwarzenegger in your film will attract the international buyers and financing. Of course, you'll also need a good script to attract them and at least a million dollars for their services.

Part of the reason you need a high profile actor in your low budget indie is because you won't have enough marketing muscle to let people know about your film. That's why they rely on Bruce Willis and others. "They have intrinsic value," said Epstein.

If money is really tight you do what Epstein called, "stunt casting" and put your stars in small roles. You just want to "put them on the poster," he said.

How do you know if your potential star has the power to lure people into theater seats?

One thing you don't want to do is try a low budget comedy if you're interested in international sales. Every country is making their own comedies and humor doesn't travel well, "unless it's 'A' list cast, like Adam Sandler or Will Farrell," said Epstein.

If horror, thrillers and action films aren't your dream and you don't own the rights to Harry Potter, Batman or any Marvel super heroes all is not lost. There are still ways to get your middle range drama made. A few squeak through every year and often end up as Oscar contenders.

There are companies that are looking for high quality films that do well theatrically in the United States and Europe. To get your film into the market you need to find a sales agent "who gets your film," said Mimi Steinbauer, president & CEO, Radiant Films International. "Find someone who loves it," she said.

But before that you'll need a script that stands out, a producer or executive producer, a director that actors want to work with and cast. "Cast is important for dramas," said Steinbauer.

Doing these prestige films is a challenge but a great story and script will attract the elements you need including financing.

The real growth is in China. The Chinese are opening nine theaters a day and by 2017 the market for movies there will be bigger than the Unites States. Going to the movies is a family experience in China and it's growing.

"People still love to go to the movies in China," said Hawk Koch, former president of the Academy of Motion Pictures Arts and Sciences. "You can't imagine how big a revenue source 1.4 billion people is," he said.

A potentially large audience is still no guarantee you'll succeed. "Seven out of 10 movies fail," said Mark Gill, president of Millennium Films, the creators of the "Expendables" franchise.

He quoted William Fox, the founder of Fox Film Corporation in 1915, who came up with the solution. Fox said, "The movie business is on average a terrible business. Don't be average."

It's still true today. "You have to be superlative," said Gill. "It's like hitting a quarter from a mile away."

A full immersion into the AFM is a good step to take if you want to start shooting at quarters.