Here's a tip for budding entrepreneurs -- go to Memphis, dig up anything touched by Elvis and sell it.

Among the mundane items graced by their connection to Elvis Presley that are expected to fetch thousands at an auction next week are an old library card, pill bottles, a trench coat and a signed high school yearbook, reports the Daily Mail.

The library card, which Presley, then 13 years old, signed to check out a copy of "The Courageous Heart: A Life of Andrew Jackson For Young Readers" from Humes High School in Memphis in 1948, is expected to sell for more than $3,500 when it is sold on August 14.

SCROLL DOWN FOR A CLOSE-UP OF THE LIBRARY CARD

Judging by previous auctions, the upcoming Heritage Auctions Ultimate Elvis Signature Auction at the Peabody Hotel in Memphis should be a big success. In June, a watch that Elvis gave to a friend in the military fetched over $52,000.

You can view the whole auction catalog here.

“Elvis remains one of the most popular and durable figures in American Pop Culture,” Margaret Barrett, Director of Entertainment & Music Memorabilia at Heritage Auctions, told Art Daily. “This auction, our second event totally dedicated to Elvis, is a celebration of his amazing life and legacy.”

Always make sure to double-check the history of the items sold at an auction. An auction company in Chicago was busted last month for selling Elvis's hair though its authenticity was in doubt, the Associated Press reported. 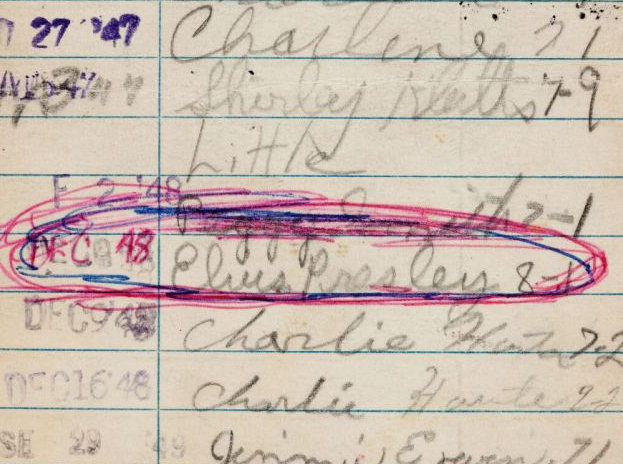