Elvis Presley, the "King of Rock and Roll" and U.S. Army private, was head-over-heels the second he first met 14-year-old Priscilla Presley, step-daughter of a United States Air Force officer. What followed was a seven-year courtship, a brief marriage and what quickly became one of the most contentious relationships in Tinseltown. Although this couple didn't stand the test of time, their union will forever go down in history as one to remember.

In celebration of Elvis and Priscilla Presley's wedding anniversary (on May 1), we are taking a look back at a photograph of the happy couple on their big day. Priscilla looks ethereal in a white silk chiffon dress and a three-foot tulle veil, while Elvis, never to be outshone by his Mrs., wore an equally attention-grabbing black brocade silk tuxedo and a spiffy bow tie. What's so great about this picture is how candid it is -- whereas so many celebrity wedding photos (and the people in them) look impossibly perfect, this 1967 snapshot shows a Hollywood couple looking carefree, relaxed and totally normal (and we love it!). 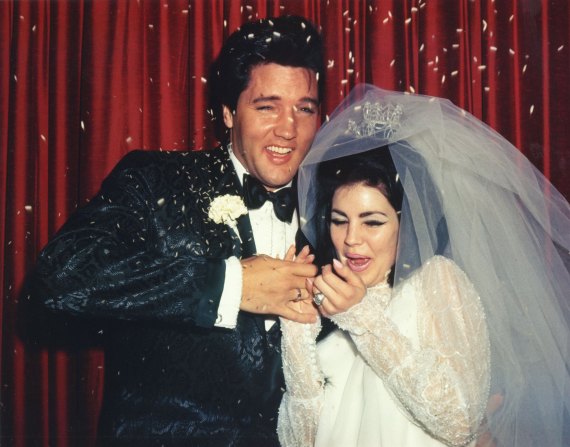