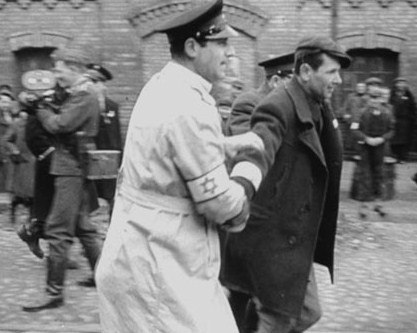 Jewish ghetto police round up Jews for the Nazi camera-man

Aside from Auschwitz and other Nazi death camps, nothing epitomizes the horrors of the Holocaust more than the infamous Warsaw Ghetto.

Surrounded by a barbed wire topped 10 foot high brick wall, it was into this tiny corner of the Polish capital that the Nazis herded up to 400,000 Jewish prisoners at a time; systematically starving them with barely 181 calories of rations per day, leaving them to die of hunger or disease or simply leaving them to languish while they unknowingly awaited shipment to Hitler's gas chambers.

It was here too that in the spring of 1943, a small band of heroic Jewish fighters launched a desperate uprising against their Nazis captors, a battle that ended only when the overwhelmingly powerful German forces leveled the ghetto and reduced it to rubble.

Yet barely a year before, In May 1942 -- two and half years after the Warsaw Ghetto was established and shortly before the Nazis sent the Ghetto's first 300,000 Jews to the extermination camp of Treblinka -- the Reich dispatched a crew of German soldiers to film Jewish life in the Warsaw Ghetto.

Their perverse propaganda goal: to record for posterity examples of the religious practices and "sub-human culture" of the soon to be eliminated judische Rasse, everything from a circumcision ceremony to a burial service; from the extreme poverty of the many to the supposed lack of concern of those few Jews who still had some assets.

Parts of this nefarious Nazi propaganda film were heart wrenchingly real; the Nazis had no compunction about showing Jews suffering. But other parts of it were carefully staged, a German Potemkin Village movie honed for propaganda and construed to discredit the Jews.

Horrifying snippets of it have appeared over the years: a starving child dying on the streets of the Ghetto while other Jews walk by or still others dine on meals at well stocked restaurants that never existed' Nazi appointed Jewish Ghetto police brutalizing fellow Jews.

Yet mysteriously the Nazis' propaganda film was never finished. For more than 50 years, the silent, unedited reels lay hidden in a secret East German film archive in boxes marked simply, "The Ghetto."

Then along came Yael Hersonski, a young Israeli documentary maker whose own grandmother had survived the Warsaw Ghetto. After gaining access to the long abandoned footage via the current German government, Hersonski wrote and directed A Film Unfinished, a staggering 90 minute documentary of the atrocities of life in the Warsaw Ghetto as filmed by the Nazis themselves. It is presented in America by the New York distributor Oscilloscope Laboratories . 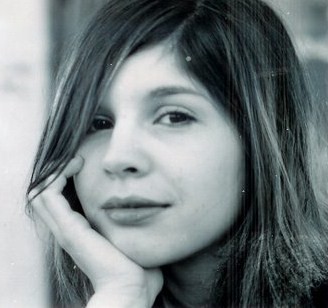 Two-thirds of the 31 year old Hersonski's film consists of the original Nazi propaganda footage - including out-takes. The rest is comprised in part of the wrinkled faces of a handful of Warsaw ghetto survivors grimly watching an actual screening of the film and offering commentary (some clearly remember the Wermacht cameramen at work). Using an actor, Hersonski has also re-enacted the actual post-war testimony of one of the film's original German cameramen (now deceased).

But in this viewer's mind, the most fascinating parts of the unfinished film are its out-takes which at times clearly show the cameramen themselves caught in the shot (see photo at beginning of piece) or demonstrate how scenes were staged, then re-shot to produce a "better" anti-Semitic result.

Hersonski's "A Film Unfinished" will open on August 18th in New York at The Film Forum (209 W. Houston Street) and Lincoln Plaza (1886 Broadway), on August 20th It premieres in Los Angeles at The Laemmle Royal and in Encino, California at Laemmle Town Center. This will be followed by a national run of the film.

For some obscure reason, the Motion Picture Association of America - which lets our youth be bombarded by meaningless entertainment and violence - has decided to give A Film Unfinished an R rating because of "disturbing images of Holocaust atrocities, including graphic nudity," the latter in a Nazi-coerced scene of young women in a ritual bath.

The rating, which prevents anyone under 17 from watching the film unless accompanied by a parent or adult guardian, will not block the commercial screening of the film. But it will prevent the film from being shown in high school classes as an educational tool, to the particular disappointment of its creator Yael Hersonski who looks barely 17 herself and says she made it "not only for now but for future generations."

This incredibly powerful film is a must for everyone.