Charleston, S.C. -- Four days after a gunman killed nine inside the basement of Emanuel AME Church in Charleston, the doors were once again open to welcome congregants.

"We ask that everything be done with dignity. There will be no backpacks, fanny packs or cameras. This is for security purposes," a man doing crowd control at the church told the swarm of people assembled near the door.

Charleston police stood in the vestibule.

Church members were given priority among a crowd that included mostly visitors and press. Women were allowed in first in a show of chivalry but also for security. "We will be checking pocketbooks," announced one usher.

Like on so many Sundays before tragedy struck this historic church, they started with Sunday school at 8:30 a.m. Service began at 9:30 a.m.

There were no programs to detail the order of the service. 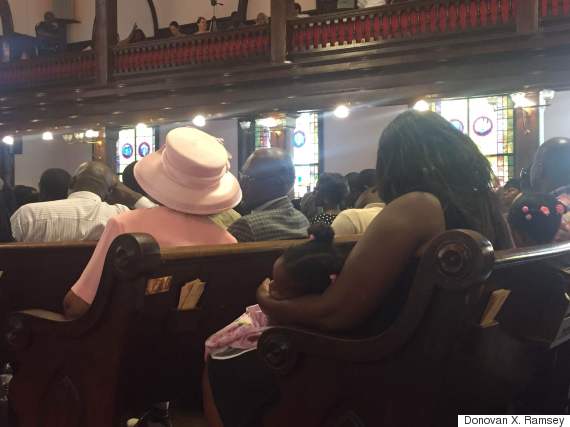 South Carolina Governor Nikki Haley and her family sat in the front row along with Congresswoman Maxine Waters (D-Calif.), NAACP President Cornell Brooks and other dignitaries.

Before long, the organist began playing "Amazing Grace" followed by "What a Friend We Have in Jesus". The choir, dressed in all white began the service, by singing "Total Praise", a gospel song that brought the crowd to its feet.

Ministers used the invocation to pray for Wednesday's victims, naming each of them.

"We are reminded this morning of the freshness of death. It comes like a thief in the night," said Norvel Goff, reverend and presiding elder of the African Methodist Episcopal district that includes Emanuel. Goff called congregants to the altar to pray. "Many of our hearts are still broken. Many of us are still shedding tears. But we must take our burdens to the Lord and leave them there." 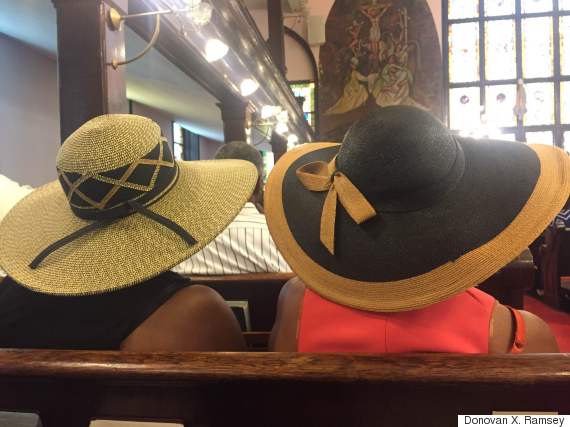 One by one, worshippers gathered at the pulpit, many weeping but all kneeling to offer prayers.

Goff continued, "As we try to make sense of nonsense, pray for our children. We pray that God will give us the clarity of thought to share with them what God has shared with us."

One man erupted in tears on the way back to his seat repeating over and over, "This is just an unthinkable tragedy. Help us, God."

Twenty minutes away from Emanuel AME, congregation members at Calvary Church bowed their heads and prayed for the lives lost on Wednesday.

Calvary preaches many things, including the inevitable rapture, the second coming of Jesus, and the “monogamous marriage between male and female as the foundation of the family.” The majority of the few dozen in attendance on Sunday were white.

“This is what anger and hate against the church looks like,” Pastor Richard Perea said of the killings. “The liberal media must now care about church in a way they have not before.”

Sunday’s sermon focused mostly on Bible study, going line-by-line through Biblical verses much in the same way "The Beautiful 9" at Emanuel did before alleged mass murderer Dylann Roof turned a gun on them.

Gaye Ashworth, a 75-year-old member of Calvary, told the Huffington Post that she thought the killings were purely race related.

“I don’t think it has anything to do with religion, not at all,” Ashworth said, adding that in this time of tragedy, more people need to pray.

“It was obviously a race issue in his heart,” Perea told HuffPost. “But why he went into a church versus down in the street, in my opinion, is something that was demonically influenced.”

A live band at Calvary played songs of worship as congregation members raised their hands to the ceiling. Taqueshia Brooks, 29, told HuffPost that her community will move forward by submitting to the Lord.

“After everything that’s happened in the past week, coming to church means that God is still sovereign,” Brooks said. “He still gives us this freedom to come and not be afraid even when people are prejudiced with hate in their heart.”

When service was over at Emanuel A.M.E., parishioners were greeted by a sea of support from members of the community. Some people handed out bottles of water and cookies to churchgoers as they left the building. Others just shared kind words and hugs.

Jack Logan, 52, the founder of a Put Down the Guns Now, a nonprofit based in South Carolina that is dedicated to reducing gun violence among young people, said he attended the service at Emanuel A.M.E. for that feeling of connection. “This was a tragedy for South Carolina, and America,” Logan said. “I wanted to come down here, show love and take part in this great church service today.”

Another visitor, 28-year-old Ryan Shepard, a court clerk, drove to Charleston from Atlanta just to be at Emanuel’s first church service since Wednesday’s tragedy. “I think we’re in an important point in American history as it relates to race relations and facing some of the darker chapters of our nation’s past that we haven’t reconciled,” Shepard said. “I wanted to be present and a part of this mourning process, to witness and support the community here.”

Still, looking forward to his return home, Shepard emphasized that there was still work to be done in uniting the country across racial lines.

“For me, I hope that from this comes a moment where people can push hard and break through,” he said. "I’ll be watching for how the message of reconciliation goes beyond today.”