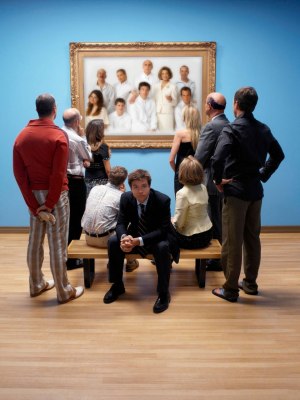 After nearly seven years of bleak Arrested Development-lessness, Netflix announced today that it will unload a full 15 new episodes of the zany Mitch Hurwitz-created sitcom onto its site on May 26 so that Bluth nation can self-administer the fourth season in healthy, 30-minute doses binge-watch back-to-back installments in a single seven-and-a-half-hour sitting. In anticipation of this inevitable feeding frenzy, less than two months away, we've compiled some tips to help you get ready for the comedy's anticipated return next month.

For Those Who Will Not Gorge Themselves on Arrested Development:

While you will not have to recover from the kind of 7.5-hour, Ron Howard-narrated dissociative K-hole that your A.D.-addicted friends will be reemerging from early Sunday morning, you will have to steel yourself for a different kind of challenge: spoilers en masse, which will likely start finding their way on the Internet immediately. We suggest conditioning yourselves now to immediately click away from Arrested Development mentions on the computer and walk away from conversations that could be remotely related. If those are not viable options, just hide out like a fugitive in the attic of your family's model home until you are able to catch up at a reasonable pace.

For Those Who Will Gorge Themselves on Arrested Development, Because They Are Only Human:

Like competitive eating, marathon running, or disappearing a family yacht with explosives, watching 7.5 hours of back-to-back television is not something that can be done without appropriate preparation. We suggest viewing several eight-hour blocks of Netflix-appropriated television programming, or, if need be, 7.5 hours of dysfunctional families at the local mall, to build endurance.

Acquire Netflix Through Whatever Means Necessary:

Whether this involves logging into the account of your ex-boyfriend, who amazingly still has not changed his password five years later; breaking/entering into a home in your neighborhood where you've recently spotted Netflix-red envelopes littering the doorstep; or scrounging up the paltry $7.99 a month. (About 53 cents an episode!)

Ever since the 2006 Season Three finale, you have been plagued by the same nagging Arrested Development questions from every journalist in every single media interview. Although you are essentially gifting your rabid fans the impossible--a complete new season of a ratings-deficient (although brilliant!) comedy after a seven-year hiatus--this will not be enough. Cast members should appropriately gird themselves for follow-up questions from Arrested Development fans whose obsession has only mutated with one superhuman dose of Bluth. Their curiosities will not subside until they are given the movie that you tenuously suggested via the last episode of the third season, a sequel, and maybe a touring stage show. (Just a suggestion.)

25 Years in the Life of Model Kate Moss