It's fitting for the 20th Anniversary Environmental Media Awards to introduce, for the first time, the Legacy Award. After all, the Environmental Media Association was founded 20 years ago by Norman and Lyn Lear, and Cindy and Alan Horn, whose vision was to get environmental messages into entertainment - into television, film and music - and try to educate and motivate the public through entertainment. A true legacy of its own. 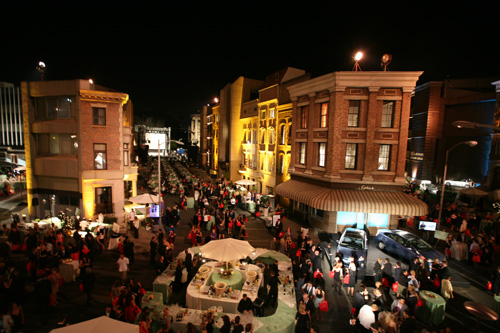 As we widen our perspective and take notice of time over a longer period, we see patterns in nature emerge that we are blind to. These shifting perspectives are changing our values regarding the environment. Legacy is one such changing value - our work becomes greater than us - it transcends us individually and becomes a legacy for entire generations to benefit from.

And the first ever Legacy Award goes to: National Geographic. 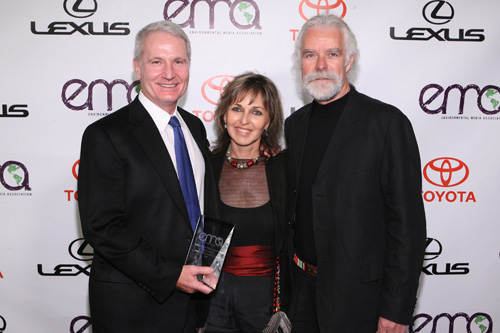 Debbie Levin, President of the Environmental Media Association stated, "It's always been there. You know? Everyone has grown up with National Geographic - the magazine, the documentaries in school. It just is. It's a staple. But I don't think that people really understand the forward thinking and the commitment and the fact that they are a green media giant. That's where Jacques Cousteau came out of and Jane Goodall and all of these superstar explorers that we have heard of came through that program, which is what is so remarkable."

Included in National Geographic's long list of explorers-in-residence,
are Dereck and Beverly Joubert, Filmmakers, photographers, and
conservationists, who accepted the Legacy Award along with John
Fayhee, President of National Geographic Society.

A Wider Perspective
Dereck and Beverly Joubert have been in the field 28 years documenting research on the big cats - lions and leopards. As the Jouberts widen their perspective on time, they are witnessing patterns in nature that are emerging - that we are all blind to. 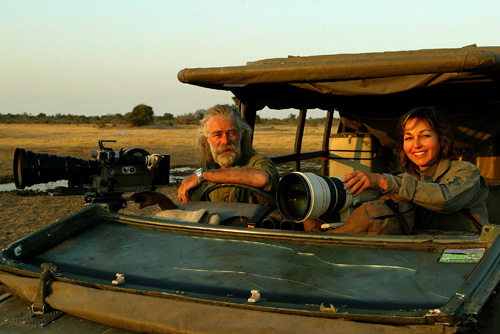 Dereck Joubert said, "during that time having produced something like twenty films and ten books and a number of articles around the world, we anticipated that we had done enough to inspire people around the world to take care of these big cats. One of our films was being seen by a billion people. And yet when we did the numbers recently, we realized that in the time from when we were born to today, lion numbers have crashed. They've gone from 450,000 down to 20,000. And leopard numbers have gone from 700,000 down to around 50,000 we think. And at the moment there's probably fewer than 900 tigers in India. So clearly there's a problem. These things are in a massive decline". 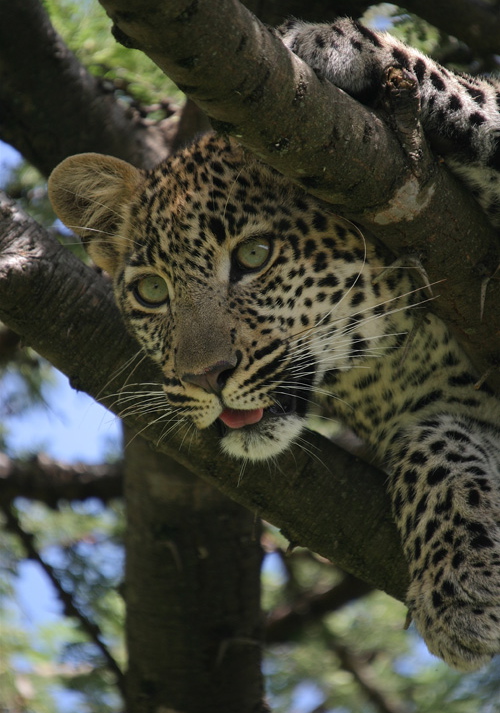 The Jouberts are witness to the devastation of our environment and the resultant potential of losing all lions if we do nothing. The ironic twist is, many of us have seen these inspiring documentaries on lions, yet almost no one knows their population has dwindled to alarmingly low numbers. On this award day, the Jouberts tell us a different story
"So our personal prediction, according to these scientifically backed-up statistics that we'll see mass extinction by 2020. And what's really disturbing about all of this is that nobody knows about it. The world thinks that these big iconic lions and other big cats around the world are safe, because they are the biggest and the most photographed probably of all African animals, and yet there's fewer lions than there are polar bears." 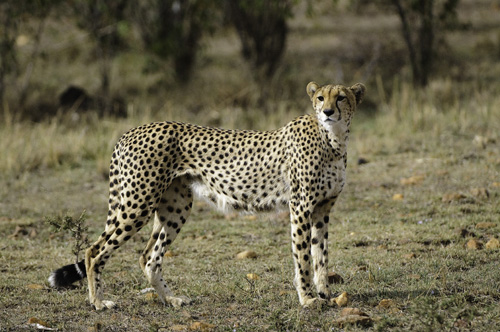 Changing Values
Imagine a world where we have no lions! What would become of our imagination if we no longer have a wild kingdom of lions? Dereck continued, "I think that we all have a sense of wildness in us, and when that disappears, you do get a sense that there's nothing left.
And it doesn't really matter that - you may live in Santa Monica or in someplace where there are no lions, and you may not even have the ambition or finances to ever go to Africa and to see a wild lion, but knowing that there is someplace with wild lions in it gives you that sense of wholeness, and vitality again. Without that I think we die of - not a great loneliness, but a great sense of despair. That the world is now completely tame and dominated." 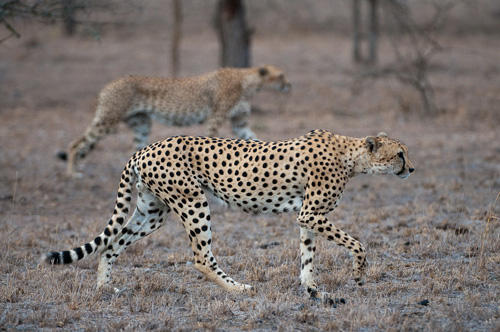 A Legacy in the Making
The Jouberts have just launched the Big Cat Initiative. Dereck explains, "Clearly there is this massive, massive decline. And so we, with the National Geographic, have started the Big Cat Initiative. And that's an emergency action plan. So in essence what we're doing is we're making the call - first of all, bringing this to everybody's attention because the minute people know about it, they can come up with all sort of ideas on how to fix it."

According to the Jouberts, there still is hope, and it's not too late to turn this situation around. They explained, "What we're doing is the Big Cat Initiative, an intervention to stop the decline by 2015. And then from there we're getting the next segment of 2020 that we will start increasing the animal areas. Right now our goal is really to bring awareness to the Big Cat Initiative. And then if people could go onto the National Geographic.com/BigCats website, that could be wonderful so that they can see all the projects. And if they're interested, you know, in donating or giving innovative ideas in any way, we would be grateful."

One of the Joubert's strategies for saving these big cats is to stimulate conservation tourism into regions where communities are in conflict with nature and cats in particular. Beverly Joubert explained, "We set up Great Plains with our partners as a completely environmentally sustainable company that includes communities as stakeholders, shuts down hunting and creates corridors. It is proactive and in these times I think people want to travel to destinations they know are being responsible to the environment and to the people of Africa."

This truly is a legacy in the making, one that I believe we all can participate in- our work becomes greater than us - as we establish a legacy for future generations to benefit from. 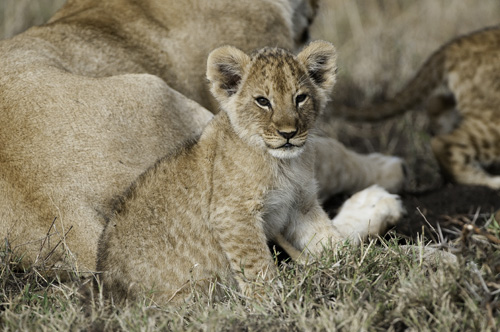 The Legacy of Disney 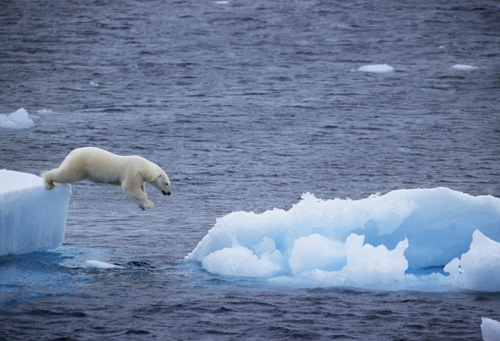 Disneynature's Earth won the EMA Feature Film Award. Jean-Francois Camilleri is Executive Vice President and General Manager of Disneynature, the first new Disney-branded film label from The Walt Disney Studios in over 60 years, which was launched in April 2008 to bring the world's top nature filmmakers together to share a wide variety of wildlife subjects and stories with theatrical audiences. The label was formed in the proud tradition established by Walt Disney with the classic True-Life Adventures series from 1948 to 1960, which won eight Academy Awards (registered trademark)

"Nature invents the most beautiful stories. If you're looking for the best scripts, they are actually in nature. So in a place like the Disney Studios, where storytelling is key, we are going to go and look for the stories in nature and bring them to the big screen. This was a vision of Walt Disney back in 1948, and this is the vision of Disneynature today."

The Role of Media
Disney understands the role of media in caring for the planet and has backed this understanding up with a set of ambitious environmental goals (part of Disney's corporate Responsibility Report http://disney.go.com/crreport/) aimed at minimizing the company's impact on the planet and inspiring others to do the same.

Dr. Beth Stevens, Senior Vice President of Environmental Affairs at Disney stated, "There's a big role for media and through all of our different movies and programs we have the ability to educate people and we have the ability, just through the beauty of nature, like you saw on the movie Earth, to inspire people to take care of the planet. Caring for the environment and a commitment to conservation is really a part of our DNA here at Disney. It really started with Walt himself and has carried on."

Stevens continued, "It's part of our responsibility (Disney) to future generations to really show, as much as we can, to be environmental stewards and to promote environmental stewardship. We were able to announce today some major investments in forestry projects around the globe, in the Amazon, in the Congo basin and in the United States. We're making these investments because of our belief in the need to safeguard these really critical natural environments which have such an important impact on climate and on biodiversity and on the overall quality of life on the planet." 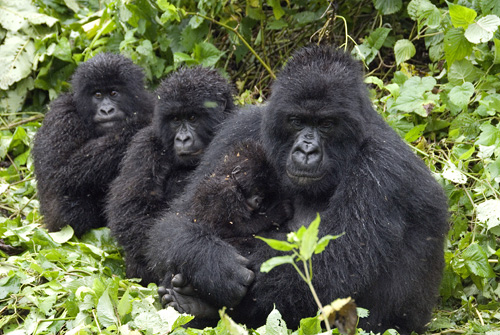 It's Our Generation's Legacy
And as a final note, Debbie Levin stated, "... the reason that the awards are so important, and they're so important, still, to Norman and Lyn and Alan and Cindy, is that this is the one time every year that we are allowed to call attention to the really important work that all these people are doing. And they don't have to. You know? They can try to put a film together or a TV show together, and they don't have to incorporate environmental behaviors at all. It's not required. But they do it, because they believe that they can make a difference, and they believe that we need to do this, to be able to survive properly on this planet...and it's empowering." 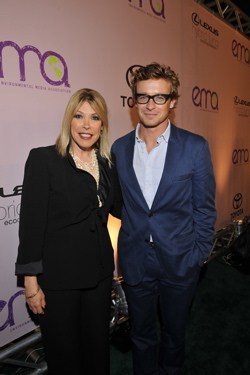 The winners for 2009 Environmental Media Awards are: