Recently, I received a book in the mail that was endorsed by music mogul Russell Simmons, Oprah Winfrey beau Stedman Graham, Morehouse College President Robert Franklin and, among others, the actress Goldie Hawn. The author included this note: "Dear Christine, I thank God for you and your faithfulness!! I loved your mother and father!!"

After the foreword written by Newark Mayor Cory Booker and an introductory letter that the author addresses to his grandchildren, he opens with these words:

"Vinnie De Pasquale and I had been waiting for this day for many months. It was June 17, 1960, and we were about to move into a two-room tenement apartment at 117th Street and Lenox Avenue in Harlem, New York. Vinnie had recently gotten out of jail, and I'd just finished the second of what would be my three freshman years of college."

Vinnie Di Pasquale is my father and the book is "From the Rearview Mirror: Reflecting on Connecting the Dots." Urban youth ministry pioneer Bill Millken is the author. His memoir tells the remarkable story of how he, an affluent, but ne'er do-well kid from the suburbs of Pittsburgh had his life transformed at the same Colorado Young Life camp as my father. From there Milliken went on to establish Young Life's ministry in New York City and later founded the Communities in Schools organization in Atlanta. His book says he has been an advisor to five U.S. presidents, but the highlight, for me, is how he frames the work he did with my father and others in New York City as the foundation of all his future endeavors.

It's a deeply humbling experience, as the daughter of a high school janitor, to read such a thing. My father died of a heart attack at age 41 in 1975 and the only stories I've heard about his work with Young Life come from my mother's memories. Those years were very difficult ones for her. As I wrote previously, she and my father met through Young Life. What I didn't write is that after my sister was born with significant medical challenges in 1963 and my mother became seriously ill while pregnant with me in 1964, our family left New York City and urban ministry.

I had no idea, for example, that in 1998 a cover story about my father was published in the Young Life Relationships magazine. But then, long-time Young Life leader Mal McSwain contacted me to say he wanted to send me photos and letters from my father that date back to 1957. The Relationships article was included in the package (along with an excerpt from Zondervan's "God in the Garden: The Story of the Billy Graham New York Crusade" that tells a bit of my father's story). In the article, McSwain talks about meeting Vinnie and his fellow Newark gang members when he was a camp counselor in Colorado. Reflecting on the significance of that summer, he says, "We didn't know what had hit us in '56. These guys were the real thing. This was only the beginning. It opened the door to Young Life's urban ministry."

I love reading these stories because my father died before I was old enough to hear them from him. But he never entirely broke free of his past, as all the narratives I've read about him suggest. Until the time of his death, he continued to struggle with the pull of behaviors he learned on the streets of Newark. And yet, he also never gave up on his journey of faith, or on his desire to reach out to young people and help them find a better way.

Milliken writes that through his work in schools, he came to learn how important custodians are to those communities. I distinctly remember my father's mentoring relationships with students at the high school in Manasquan, New Jersey, where he worked. Those relationships were so significant that after he collapsed and died playing basketball there, the senior class dedicated its yearbook to him and honored him at its graduation ceremony.

What I loved best about Milliken's memoir, apart from being reintroduced to my father through his eyes, is how he talks about his own lifelong need for healing. Mixed in with stories like Jacqueline Kennedy Onassis arranging an internship for her son John Jr. with his organization are stories of his own brokenness and pursuit of healing. The final chapter has Milliken seeking medical treatment for post-traumatic stress symptoms and severe gastrointestinal distress brought on by decades of overwork in urban ministry. "I've spent the last three years trying to lead a more balanced life," he writes, and then explains that the reason he's confessing these things is that he wants readers to know that "the healing journey is never finished." "All my hurting places, limitations, and shames aren't just distant memories. They're still with me, still clearly visible," he says.

There's a penetrating lesson for me in this. While I have wonderful memories of my father's creativity as a photographer and craftsman, of camping trips on Cape Cod and of raucous get-togethers with his extended family, I also have memories of marital tension related to his struggles. The written story of his life sometimes seems to make him out to be worse than perhaps he was before his conversion and better than he was afterward. It's a trend in conversion stories that we should rethink. We all live with ongoing brokenness and in perpetual need of God's healing touch. Bill Milliken makes this clear in his memoir. It is true for him, just as it was true for my late father and my late son, both of whom affirmed their Christian faith right before they died despite ongoing spiritual struggles. It's true for me too, in part because of their untimely deaths.

God has a funny way of ministering healing though. Sometimes it comes through strangers who send packages via the U.S. Postal Service (or through meetings with people who impacted our lives more than we ever fully realize). In a letter to Young Life supporters from 1965 that McSwain sent me, my father wrote, "Three years ago I married a fine Christian girl named Carol. We have been richly blessed with two lovely daughters ... We thank God every day as we see them grow physically, but our greatest hope is that they may grow up with God in their hearts." Daddy, I'm happy to report that your prayers have been answered.

This article has been slightly altered and is republished with permission from UrbanFaith.com. 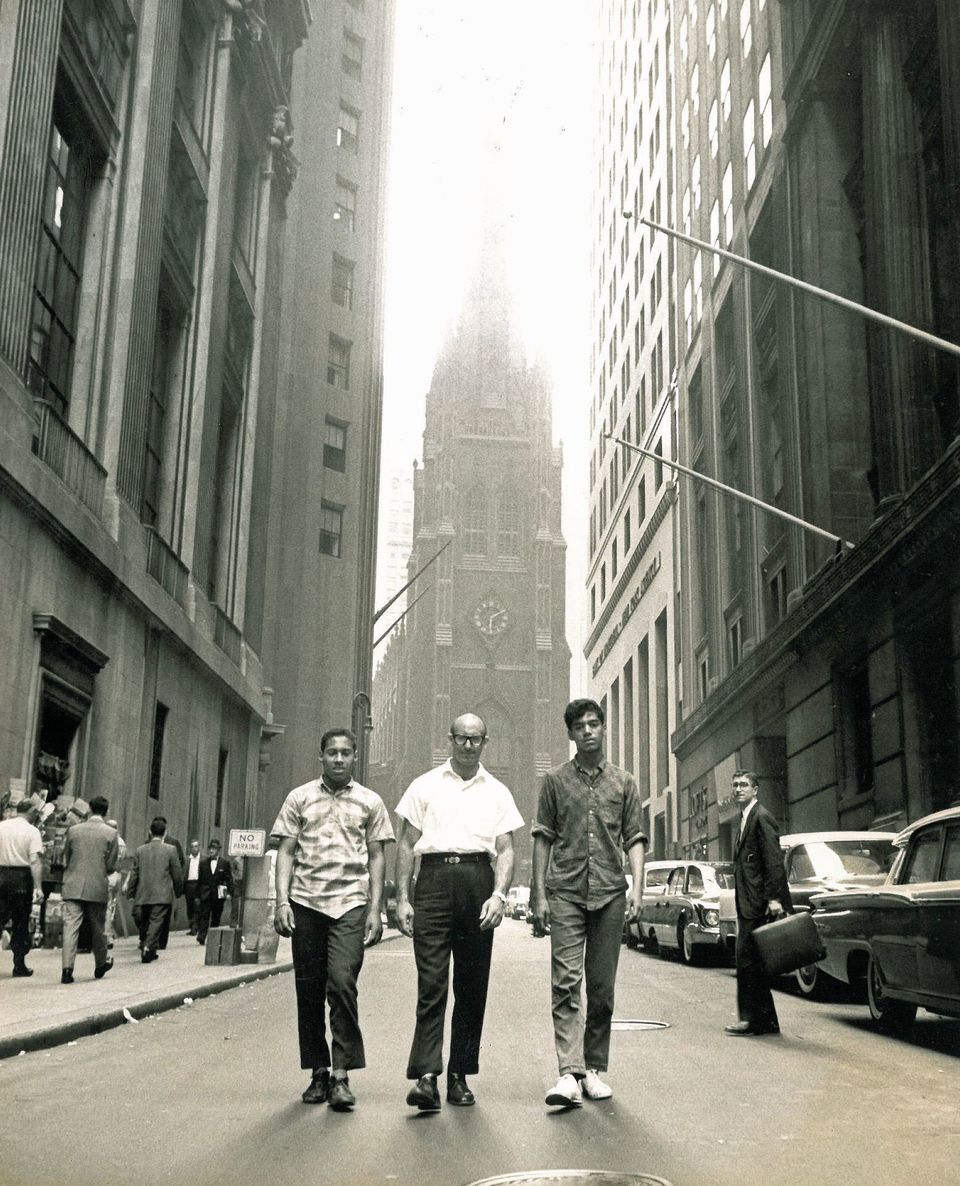 1 / 3
Early 1960s. Vinnie DiPasquale and two kids he was ministering to. They're walking down Wall Street, NYC. Behind them is Trinity Church, which supported his work.
Christine Scheller