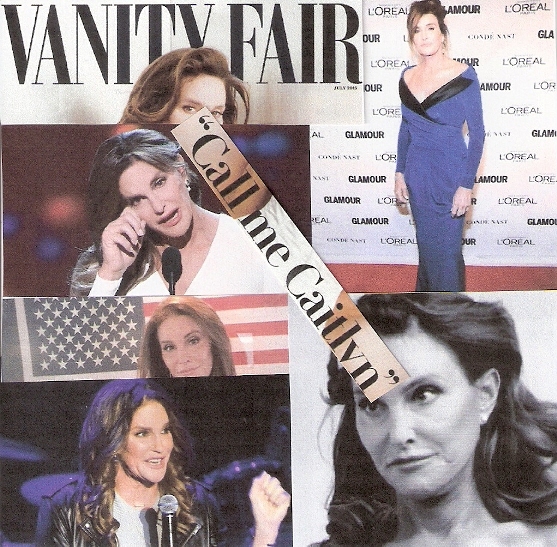 I remember the giddy surreality I felt when I first learned the former Olympian and Kardashian cast member had publicly confirmed after months of speculation that she was one of us. I remember thinking, OMG, someone of her stature, with so much on the line -- surely there won't be any more denying that being trans is a real thing. Surrendering to the moment, I underestimated people's capacity for implausible denial.

I also remember how riveting I found the experience of watching her acceptance speech on last summer's ESPY awards show after she'd received the Arthur Ashe Courage Award. I cried when she said she was tough enough to take the crap that was already being heaped on her, then pleaded for understanding and support for those who were more vulnerable and "shouldn't have to take it" How transformative that could be, I mused, reflecting on my own modest challenges: how wonderful to enter a public restroom without a knotted stomach, or to get my hair cut (as I had the day before) without feeling like a third of the women in the salon were looking at me as something less than human. That simple plea was a shining moment for Jenner.

But the honeymoon didn't last long, 'cuz then there was the rest. The media frenzy. The reality TV show. The political weirdness.

That the media would swoop down on her after she came out, and make her a de facto spokesperson for the trans "community," was as inevitable as the ugly backlash that blitzed her. How positive the media attention has been is another question. Her photo shoots last year for Vanity Fair and Glamour, for example, while on one level a celebration of trans women as women, have in their evocations of conventional female glamour also reinforced the old transphobic stereotype of us as just "sissy" men playing a freakish, pathetic game of dress-up. It's an impression that neither Jenner's conventionally "male" voice and mien nor the recent false rumors that she's considering "de-transitioning" will do much to counteract.

Her reality TV show, I Am Cait, was going to be an important vehicle for countering such stereotypes by spreading awareness of the trans condition. The show has probably accomplished at least a little of that goal, in particular (for those who were still watching) in its recently aired second season, for which a group of iconic and/or influential trans "gal pals" were assembled around her. But the artificiality of the context for the group's interactions -- a "road trip" in a customized bus -- not to mention of the "reality" TV format itself, has doubtless undermined at least some of the series' positive impact by again suggesting the unreality of the trans condition.

And then there are Jenner's politics.

Her vocal allegiance to the Republican Party is problematic, certainly, given the majority of the party's ongoing hostility to people like us -- as gal pal Jennifer Boylan repeatedly pointed out to her over the course of I Am Cait's second season. Particularly troublesome have been Jenner's parroting of the party's hostile dogma on issues directly impacting so many of our lives like welfare, and -- the real WTF? head-scratcher -- her professed admiration for former presidential candidate and miserable SOB Ted Cruz. Justifying this bizarre preference by praising the junior senator from Texas for being "a great constitutionalist and a very articulate man," Jenner -- in case you missed it -- went so far as to express an interest in being his trans "ambassador" should he become president. All this while acknowledging that he was "probably one of the worst ones when it comes to trans issues."

I have no desire to defend Jenner's Cruzophilia or any of her other absurdities (Donald Drumpf "would be very good for women's issues"???). Yet I find myself even now wanting to empathize with this woman who has so often put her foot in it, and to continue embracing her presence in our ranks for the good it's doing us even if that good has a liberal admixture of bad and ugly. Indeed, in her case bad, ugly, and good have so often been inextricable from and even dependent on each other.

The source of my empathy for Jenner is the simple fact that she's struggling like the rest of us to come to terms with her identity. Sure, her wealth and celebrity status have cushioned her from much of the shit that a lot of us have to deal with, and have made easily accessible to her things most of us either struggle for or only dream about (oh to have gobs of money to sink into electrolysis!). But coming out in the public eye poses its own challenges. Transitioning is an intense, often profoundly painful experience under the best of circumstances. I remember how vulnerable I felt, emotionally as well as physically, during the first couple of years after I came out, and how thankful I was that my online job enabled me to hide away in my apartment on those days when I didn't feel equal to bearing up under the hostile gazes of others -- a luxury less readily accessible to her. Those of us who come out later in life, moreover, face the added difficulty of reconciling the years that have passed with the self we're belatedly embracing. For Jenner, that challenge is magnified tenfold by her decades-old high profile public persona and complicated, largely public personal life. We can question her judgment in undertaking this difficult journey in the spotlight; but given her status, the choice was never going to be fully hers to make.

As for the good Jenner's time in the spotlight has done, there's the obvious point that her celebrity status has drawn more attention to trans issues, nor have I relinquished my faith that it will over time help convince more and more skeptics that being trans is a real thing. There's also the fact that her high-profile presence in the Republican ranks has rankled many right-wing bigots. And if her gaffes as spokesperson are legion, I'm willing to accept as sincere (if somewhat disingenuous) her frequent avowals that her newness to being an out trans woman disqualifies her for the role, and to credit her willingness to amend her positions and to attempt to wield her influence as the nation's highest profile trans woman positively. Though an old saying has them paving the road to hell, good intentions surely count for something. In the main, however, Jenner's advocacy has borne fruits in spite of, or aside from, rather than because of her efforts.

In a provocative article for Think Progress, for example, Zack Ford attributes to Jenner's ignorance, rather than her celebrity, whatever success I Am Cait has had in changing minds and hearts. Her "naïve[té] to the struggles many transgender people have had to endure," Ford argues, makes her "a proxy for the audience," who are learning along with her. As such, he claims, her role in our move into the mainstream is that of "anti-hero" rather than hero.

Jenner's political views also have an unintended positive effect: as National Center for Transgender Equity executive director Mara Keisling points out, they highlight our diversity. Trans folks come from all ethnic, religious, and socioeconomic backgrounds, and hold a range of views on all manner of things, including politics. Being perceived as a diverse group is, I think, vital for us to achieve widespread acceptance outside LGBTQ circles, for it will help others see that we're not a monolithic fringe minority reducible to our dysphoria and suicide attempts, but rather, in the end, just like everyone else in the ways that matter.

Even Jenner's conventionally "male" voice and mien have the inadvertent upside of focusing attention on one of the biggest barriers to our acceptance: the fact that we often don't pass perfectly. For us to be accorded our full humanity, people must change how they read the visual and aural signals associated with gender. The premium placed on passing must give way to a willingness to distinguish between the outer markers and the inner reality, to accept that, say, someone who might look and/or sound to them like a man has a brain that's wired female, and should be treated as such if she requests it. Ultimately, we must surrender our genital fundamentalism and embrace gender as the fluid, richly diverse realm of human experience that it is. Because this change in perspective entails undoing centuries of "common sense" thinking, its realization will doubtless continue to meet with substantial resistance for some time to come. The issue needs forcing, then; and in the way she speaks and carries herself at present, Jenner forces it to a degree that others in the spotlight (Laverne Cox, Lana Wachowski, certainly Janet Mock) do not.

There's a poetic irony here, given Jenner's own stated views on passing. In an interview for Time magazine last December, she observed that she takes her presentation seriously because "if you're out there and...you look like a man in a dress, it makes people uncomfortable." It was yet another thoughtless gaffe for which she was roundly (and rightly) chastised, and for which she offered a swift apology and clarification. But this little episode, and the infuriating muddle of our celebrity fellow traveler's advocacy that it epitomizes, also hold a lesson we would do well to bear in mind: that our push for equal rights and full recognition is going to be as messy as the democratic process itself.