For many years I've been blessed by my friendship with Pamela Ferrell, one of the country's leading experts on natural Black hair. Pamela and her husband Taalib-Din Uqdah co-founded the Washington, D.C. hair salon Cornrows & Co. in 1980, pioneering the natural hair care movement with African-inspired braids and hairstyles. They point out that their philosophy and the natural product line they created for their styles long predated today's green movement: Cornrows & Co. has always featured a chemical-free salon with plant-based products, focusing both on protecting each client's health and using products that are locally made and safe for the earth. Today, using chemical-free products and embracing "natural beauty" have gained traction in many mainstream circles -- yet both are still sometimes considered countercultural for African Americans, especially when it comes to Black women's hair. But that tide has been slowly but surely changing, and over the years Pamela has been a leading and persistent voice championing Black women -- and girls, and boys and men -- embracing who they are.

In September 2014, Pamela was honored at the Pentagon for her admirable work. As an experienced business owner and published author, she assisted the Army's review of hairstyle policies by providing valuable information and samples of natural hairstyles before a panel of Army personnel leaders reviewing new grooming rules that had declared twists and locks unauthorized. Her presentation covered the factual differences between "circle" and "straight" hair types and the negative results that can come from policies restricting natural hairstyles made by authorities with no actual expertise on hair, "like women being forced to straighten their hair with caustic chemicals while in remote places like Iraq where running water is unpredictable." The Army ultimately revised its guidelines. Pamela gave similar testimony in 1993 when the Navy banned braids, and over the last thirty years her company initiated lawsuits against Hyatt and Marriott Hotels, American Airlines, the Smithsonian Institution security guards' supervisors, and the Washington, D.C. Metropolitan Police Department in support of allowing braided hairstyles in the workplace. She's said that she believes her role supporting "hair diversity" is to educate corporations and organizations so they can make grooming policies based on factual knowledge about hair instead of uninformed or racially-based generalizations about "bad" hairstyles. But as a hairstylist specializing in natural Black hair, Pamela has understood from the beginning that much of her work involves changing her clients' own misguided stereotypes about what their hair is "supposed" to be and do and what constitutes "good" and "bad" hair. 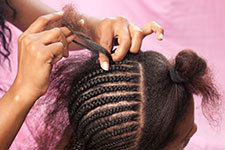 It's hardly secret that the straighter hairstyles once considered the main standard for professionalism -- and beauty -- for Black women often came from changing their hair's natural texture to mimic the texture of White people's hair. Ironically, as difficult as it was for natural braids and similar styles to become widely accepted for Black women, those styles have always been the standard of beauty for young Black girls. Many Black women still remember the hours they spent sitting between a mother's or grandmother's knees having their hair braided. I certainly do. The elaborate styles decorated with beads, barrettes, and bows have long showcased the creativity and love that goes into caring for Black girls' hair. But for many little Black girls, the day finally came when a bowl of lye or a straightening iron from the stove turned their rows of braids into straight ponytails or short little bobs. Abandoning styles based on their natural textures in favor of "Whiter" styles was a rite of passage on their way to Black womanhood.

With the "Black is beautiful" mantra that emerged in the 1960s, those attitudes slowly started to change. I was among many who proudly wore an "afro." Long, straight hairstyles were no longer the universal standard as more and more Black and multiracial women celebrated the individuality, creativity, beauty, and diversity of their natural God-given textures. Pamela has been at the forefront of this movement since the beginning; her book Let's Talk Hair is a classic for Black women dedicated to having healthy, natural hair, and her follow-up Kids Talk Hair, for which I had the privilege of writing the foreword, emphasized how important it is to teach all of our children to love their hair and themselves exactly as they are. But the fact that in 2014 Pamela Ferrell is still being invited to appear before authorities just to affirm that natural Black hairstyles have a right to exist shows we still have a way to go.

Today, teaching Black children that they don't have to have straight hair or look like anyone else or stop being who they are in order to be accepted is another way of reaffirming that they are already perfect exactly the way God made them. This is a critical message for Black children and parents, and at the same time it's a message every child needs to hear. It's a message about self-confidence, self-acceptance, tolerance, and celebrating difference that is much bigger than choosing a hairstyle.