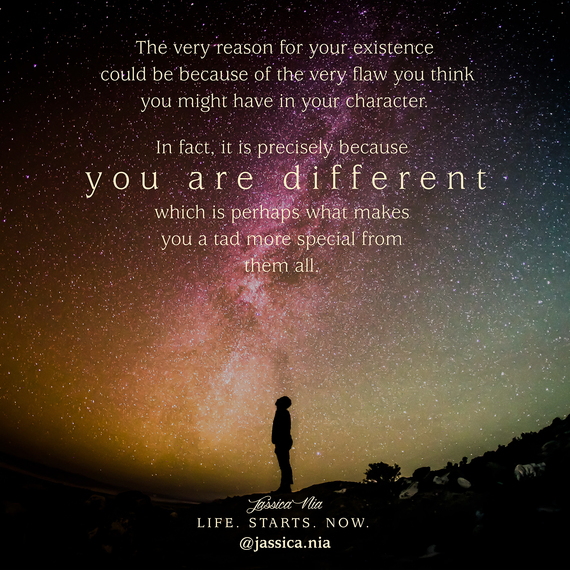 In fact, those traits of mine that were deemed to be a "weakness" were the very reason why I am still alive today despite the incurable condition I was quite conveniently diagnosed with on May 20, 2014.

It struck me that for those times where I have spent days and hours wondering if I have made the right choices in my life, was because there was this nudge, this "inner voice" within me that says, "Life is not meant to be this way."

And I was right.

Looking back now, and having done and read some few personality tests such as the 16 personalities test (Briggs Meyer), I realized just how in tune I already was back then without ever really knowing that I was totally in line with what I should or shouldn't be doing. Those times when I had such an uncomfortable feeling in the gut that I was totally going against the flow or the current, or those times when I always felt that "this just isn't the right way to do things."

On a serious note though, this just supports my long standing view further in following your gut-feeling, and your intuition. In the 16 personalities test, there is a personality called "diplomat - campaigner." This personality turned out to be mine, and trusting my feelings and intuition is so very in my character/personality, and people with such a personality actually advocates doing so.

However, prior to even knowing that trusting my intuition and feelings is part of my natural character, before the personality of "diplomat" even made any sense to me, I always felt like I was lost in this jungle of feelings and facts, between the external world telling me what they think they know, and me following my intuition and gut feelings.

It doesn't help that my nature/character personality is also such where there were times when I wasn't too confident of what I think and do, and it was a real struggle having to balance it all.

In fact, it took me a long time to realize that I was right all along.

So, this post is going out to those of you who might be potentially like me. Those of us who somehow have a knowing that following our heart is the right thing to do, yet at the same time we aren't terribly too sure of ourselves. We have an inkling that life is so much more than climbing the corporate ladder and going 9-5, or basically just doing what society tells or expects us to do.

Now I am not telling you to totally ignore the external material world, for that is an extreme and it is always a good thing to have a balance. But this is about accepting you as who you know you are, within.

The thing is, if you are anything like me or even close, you do already know who you truly are, what you really like, where you'd like to go in life (or at least have an idea of that) which might be entirely against the norm, and here's a fun fact for you, the majority of the society consists of people who possess characters or personalities entirely different from those of diplomats, called sentinels. In general, these personalities think and behave differently from characters and personalities who are diplomats, and yes, research has been done on this and you will know it to be true because if you possess a diplomat-campaigner character like me, you will already know how different you are from the rest of the population, or perhaps, how different the rest of them is... from you.

So my point is this, if you ever have this gut instinct and feelings of wonder as to why you are so different from that lady in your team, or that weird chap from the other department, then there is now more reason to trust it and follow where that nudge is pointing you towards. In my experience, you very well will most likely be right in your intuition and there really is no need for those days where you spent beating up yourself on why you react and behave so differently toward things which others have an accepted, "normal" behavior or expectation towards, and/or you seem to have lesser "ambition" than the rest of the peeps you know.

On this note however, of course, balance is required. I am in no way asking anyone to give the excuse that, "I was told to follow my intuition and feelings and be a dreamer, and today I feel lazy -- in fact, I have been feeling lazy for some time now so I am gonna skip on that task today." Nor am I telling you to run down the streets naked screaming that "YES! I am different and I knew it!" or putting down others and insisting you are right.

No. It is always about balancing your character traits. Being different does not in any way mean you are immediately placed on a pedestal or we become offish and overly confident in areas which we might have a tendency to overlook. No one is perfect and for those times where you sense you might be lacking in some areas, perhaps that could also be a good reminder for you to polish up on that particular area to pave the way for you to become a more balanced individual.

Nothing wrong with that.

In any case, for now, let's enjoy and celebrate your differences, perhaps even your flaws and yes, your quirks. For perhaps that is what indeed makes you a tad more "special" from them all.

For more of such articles as this, do join me in my website!

Download
Calling all HuffPost superfans!
Sign up for membership to become a founding member and help shape HuffPost's next chapter
Join HuffPost
Follow Jassica Nia on Twitter: www.twitter.com/jassica_nia
Voting Made Easy
Register to vote and apply for an absentee ballot today
Register now

Loving Yourself Personality Tests Acceptance Self Help Self Esteem