Today, three months after stem cells were injected into his spine, Boesen is "able to feed himself, use his cell phone, write his name, operate a motorized wheelchair and hug his friends and family..."

Flashback: when my own son Roman Reed was paralyzed in a college football accident, September 10th, 1994, there was literally no hope offered for his recovery -- or anyone else with a spinal cord injury, which were typically described as "devastating."

But Roman had no interest in giving up. He challenged himself and everyone around him. With his inspiration, California passed and renewed a research funding law named after him. 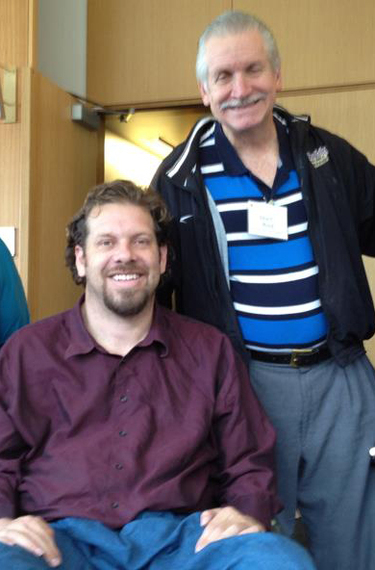 That was just the beginning.

Today, thanks to scientist Hans Keirstead's pioneering work on a Roman Reed Act grant, the efforts of dedicated scientists at Geron, Inc., funding from the California Institute for Regenerative Medicine (CIRM, which sprang from Palo Alto real estate developer Bob Klein's Proposition 71) and the unceasing efforts of too many people to name, a major improvement for the devastating injury has occurred.

Fremont, California is home to both Asterias Biotherapeutics, the company which provided the embryonic stem cells which were converted to the "insulating" oligodendrocyte cells which re-wrapped the damaged spinal cord nerves, and Roman Reed himself, for 21 years massively involved in the quest for cure, including the Roman Reed Foundation, and a new company, StemRemedium.

The first mention of paralysis in history was on the walls of an Egyptian tomb, which said: "Of paralyzed soldiers, deny them water, let them die, there is nothing that can be done."

But on this day, September 7, 2016, that grim outlook is no longer accurate; today, there is something that can be done.

And it all began with a small California law, Assembly Bill 750, (Dutra, D-Fremont), inspired by a young man, age 19, lying in a hospital bed, who refused to accept paralysis.

Don C. Reed is the author of "STEM CELL BATTLES: Proposition 71 and Beyond: How Ordinary People Can Fight Back Against the Crushing Burden of Chronic Disease," available now from Amazon.com.