Emeli Sandé has already topped the charts in her native U.K., but now the 24-year-old is hoping to join the likes of her fellow Brits -- Adele, One Direction and Mumford & Sons -- and find success in the U.S. But can lightning strike twice for the Scottish singer-songwriter? With a little help from her famous friends Coldplay, it just might.

Sandé is currently touring with the alternative rockers on the North American leg of their Mylo Xyloto tour, having also supported them during their European tour in 2011. It's a nice turn of events for Sandé, who originally earned acclaim in the music business for her songwriting talents. She has written for some of the U.K.'s biggest stars, including Tinie Tempah, Cher Lloyd, Susan Boyle and Leona Lewis. Recently, Sandé worked with R&B songstress Alicia Keys for her upcoming album. It's no wonder why "X-Factor" creator Simon Cowell dubbed her "his favorite songwriter at the minute."

She may already be an accomplished songwriter, but the "Next to Me" singer's true passion is performing. Thankfully, she has the seven-time Grammy Award winning group to help her find her voice. "'I've had a few conversations with Chris [Martin] and I see them when they're coming on and I'm going off, but the main thing I've learned from them is seeing them onstage and how it all operates," Sandé told BANG Showbiz in June.

And as they often say, imitation is the sincerest form of flattery, so HuffPost Entertainment is happy to premiere Sandé's stripped-down cover of Coldplay's hit single "Every Teardrop is a Waterfall." In this one take, one mic video, Sandé lays down a soulful vocal track, emphasizing the song's inherent vulnerability.

Listen to Emeli Sandé's soulful cover of "Every Teardrop is a Waterfall" above. Check out Sandé with Chris Martin and the boys below. 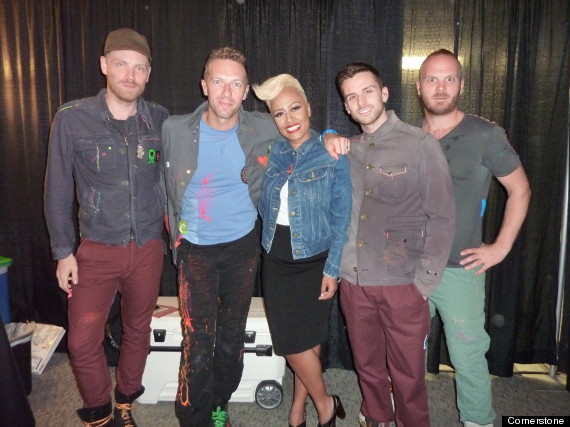 Listen to more music from Emeli Sandé below.