At the pinnacle of my incomprehensible horrors is the "Killing Fields." The Khmer Rouge's harrowing massacre of more than two million Cambodians. The slaughter in the 1970s of innocent men, women, children, babies -- babies thrown into the air and impaled on long knives, tiny heads bashed against rocks. It was a ghastliness too gruesome to comprehend. 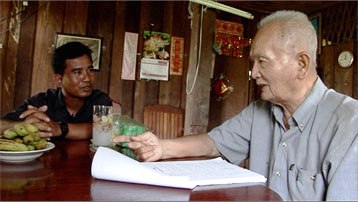 A journalist for the Phnom Pehn Post, Thet Sambath patiently and meticulously tracks down and interviews the killers, former low level Khmer Rouge solders today living in the countryside. This takes a decade of investigation and trust-building. His extraordinary perseverance, we learn, is rooted in personal trauma: his father was murdered by the Khmer Rouge, his mother was forced to marry a Khmer Rouge and died in childbirth, and his brother, it seems likely, was killed by the Khmer Rouge. For Thet understanding the horror of Cambodia is personal. And the personal became obsessional for him.

Three decades after the Killing Fields massacres that occurred during the Khmer Rouge's brutal regime from 1975 to 1979, some former Khmer Rouge killers are racked by guilt, others fear what will happen to them in the after-life, still others are concerned about the United Nations war crimes investigation. One in particular, Khoun, wants to set the record straight, while others reluctantly reveal their participation in the bloody mayhem. None, however, appear to be the monsters. In fact, they all seem rather ordinary.

History teaches us that unspeakable atrocities are often committed by ordinary men, ordinary men that circumstances transformed into monsters, who then revert back to the ordinary. History also teaches us these men were most likely following orders and they followed the orders because of fear -- the fear that if they did not kill, they would be killed.

But where did the orders come from? The instruments of killing, Khmer Rouge foot-soldiers were mostly peasant farmers in small villages. Above them were the district leaders, zone leaders, all the way up the chain of command to "Brother #1," Pol Pot himself. The former head of the Khmer Rouge is dead, dying several years ago of natural causes. Brother #2, Nuon Chea, however, remains alive. Thet Sambath located Pol Pot's right hand man and the Party's ideological leader, gained his confidence, and finally, after 3 years, asked him: why the killings?

Denying he had any knowledge at the time that innocent Cambodians were being slaughtered, Nuon Chea launches into revealing he was a man very capable of slaughtering innocent Cambodians. To save the nation, he explains, it was necessary to kill "the enemies of the people," emphasizing the nation is always more important than the individual. What enemies? The "traitors" who supported Vietnam.

Enemies of the People has exquisite scenes of puffy crystal-white clouds hanging in the bright blue sky, gentle palm trees swaying on the horizon, rich-green rice paddies, stunning Southeast Asian rainbow sunsets. This beauty is juxtaposition with grainy black-white film footage of victorious Khmer Rouge soldiers marching, Brothers #1 and #2 smiling and strutting, photos of tortured and mangled corpses, skulls and bones lying on the ground. Enemies of the People is well crafted and beautifully shot, but it's the theme of human horror that fills your mind and leaves little space for anything else.

In the end, the ghastly Killing Fields of Cambodia is comprehensible. There have been Killing Fields in Europe, in Africa, in other parts of Asia, and in America. Whenever fear grips men and women and orders come from an unknown authority then genocide is possible. And the instruments will be nearly always be ordinary men and women -- the ordinary that become monsters.

After the film, shaken, on my way out of the theater, I stopped to thank Thet Sambath. I told him I was also a writer, I was also (somewhat) obsessed, and my source was also a war.

Thet smiled and seemed interested in my story -- a young Marine in the Vietnam War, a war where two million Vietnamese died, a former combatant who today is uncomfortable about his past -- but Thet smiled too hard, seemed too interested. I quickly slipped out the door.

For more information, go to Enemies of the People website.