The last weeks of summer have been marked by renewed pressure of capital outflows and exchange rate devaluations in several systemically relevant emerging markets. In fact, this is just the latest round of a global portfolio rebalancing that has been in motion since May 22, when talk of the U.S. Federal Reserve shrinking -- and eventually reversing -- its asset purchase program (QE or quantitative easing) was made public.

Chart 1 (taken from the Financial Times) uses figures of emerging market mutual funds and exchange-traded funds (ETFs) to illustrate this shift. According to Morgan Stanley analysts, as a result of outflows and central bank interventions on currency markets, reserves in the developing world -- excluding China -- have shrunk by US$81 billion, or roughly 2 percent of the total, during May, June and July. 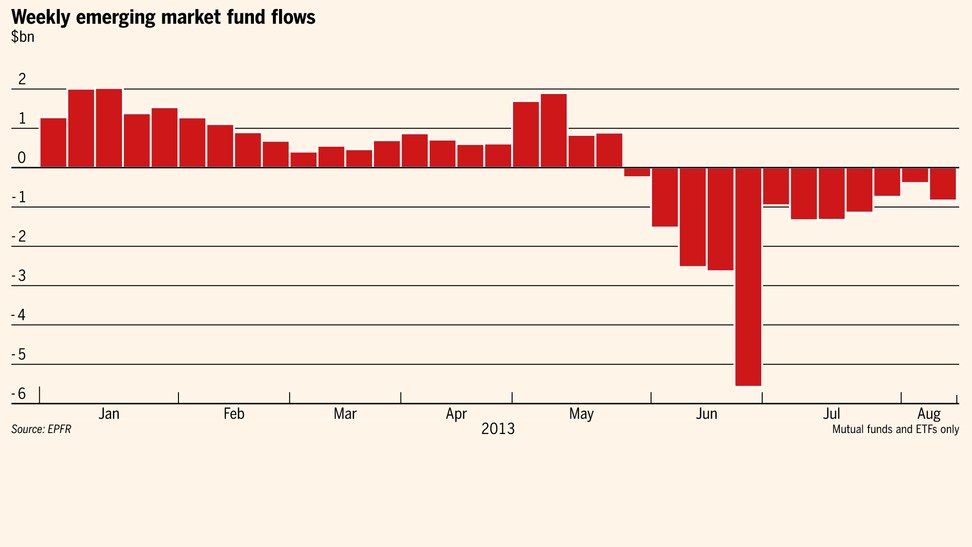 Chart 2 (also from the Financial Times) shows how, even taking into account country-specific exchange rate dynamics, May has clearly been a path-changer for several of them. Exit flows and exchange-rate pressures have not been even, but rather concentrated on countries exhibiting balance-of-payments current-account deficits (Brazil, India, South Africa, Indonesia, and Turkey). 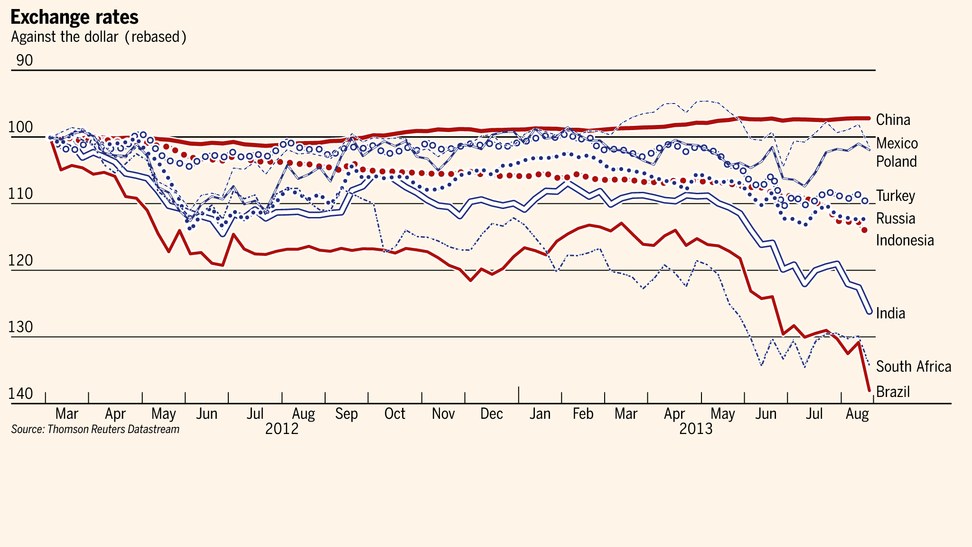 Now let me address three overstatements that I have often read/heard about what is happening:

1. The bulky capital outflows and exchange-rate moves in Emerging Markets have been extraordinary

Significant portfolio rebalances are intrinsically bumpy. There are inevitably a lot of unidirectional sales/purchases of specific assets before agents reach their newly desired portfolio compositions. It is not by chance that asset price adjustments often overshoot.

The current global portfolio adjustment -- away from countries/markets deemed as vulnerable to quantitative easing (QE) policies unwinding and toward those whose prospect improvement has justified a possible future policy change -- follows a previous dramatic financial movement that was in the opposite direction. Gloomy prospects for advanced economies (ACs) in the Post-Lehman era, the eurozone crisis, the several channels of transmission of QEs, and the post-2008 aftershock resilience of emerging markets (EMs), together led to a massive capital de-location -- and use of leverage capacity -- from ACs to EMs. As described by Mohamed El-Erian, not only was the "dedicated" investor base for EMs bloated, but flows were flooded by the much larger "crossover segment" (retail, hedge funds, and institutional).

Capital controls and other measures adopted by some countries to curb the effects of that liquidity wall do not seem to have been fully effective. As my Portuguese World Bank colleague Nuno Mota Pinto has put it: "The wave was taller than the sailor." This was the case particularly in EMs with high degrees of financial sophistication and integration. As we argued back in January 2011, actual capital flows would not even be necessary if deep and liquid derivatives markets are available -- as has been the case of Brazil. By all accounts, the increase in assets and exposure to EMs from 2009-2012 was tremendous.

Therefore it is not surprising that the expectations channel of transmission of monetary policy -- after the announcement of a future "tapering" of Fed's asset purchases, to be followed by an eventual shrinkage of Fed's balance sheet -- was enough to spark a meaningful wave of portfolio rebalancing. News on growth slowdown in major EMs -- China and Brazil, for instance -- also mattered (more on this below). However, the May 22 announcement from the Fed, signaling some confidence in the U.S. recovery, and an immediate uptick on 10-year Treasury bond rates, triggered a massive unwinding of long positions on EMs. This was particularly sharp in markets that were expected to undergo exchange-rate devaluations. Given the magnitude of previous flows, it is no wonder there seems to be mayhem with the current global portfolio realignment.

2. A disaster is looming as Quantitative Easing is unwound

The effects of the announcement of a "tapering" -- reduction at the margin -- of monthly asset purchases by the Fed are already being felt, even though its date start is yet to be established! Imagine what will happen when the Fed begins to shrink its balance sheet -- Chart 3 -- toward more "normal" levels! Will U.S. long-term Treasury yields skyrocket and make the current turmoil look like a walk in the park?

Not necessarily so, for two reasons: first, as argued by Calafia Beach Pundit regarding the Fed's balance sheet expansion, "the Fed's supply of money was not greater than the world's demand for money. It was pretty close to being just about right." Chart 4 shows the evolution of 10-year Treasury yields along the quadrupling of the US monetary base and there is no evidence that the Fed systematically pushed for abnormally low 10-year yields. There is ground to believe that the Fed basically accommodated the private (bank) demand for "excess reserves." Therefore, one might expect that, provided that the economic recovery settles in and the private demand for long-term bonds normalizes, the Fed will not have to dump unwanted assets on the market and, thus, offer huge discounts and high interest rates. 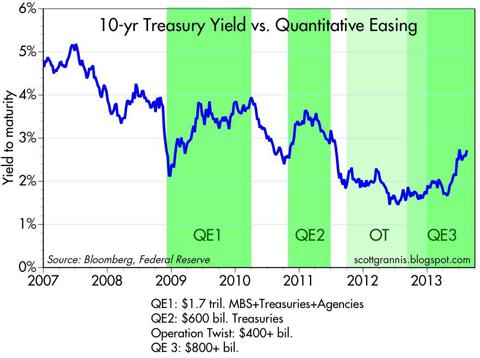 Even if the tapering and the eventual balance-sheet shrinkage focus on the long-term Treasuries share of assets (Chart 3) -- in order to prolong support to home markets via MBS holdings -- they can be implemented at a par with a resurgence of private demand. There is no reason for the Fed to risk derailing the economic recovery by not following such a path.

This leads us to the second reason for not expecting an upheaval: There is no sign of an uptick on U.S. inflation rates or expectations (Chart 5), and therefore no need for substantial interest rate hikes in the foreseeable future. Interest-rate policies could conceivably be separated from the unwinding of the balance-sheet expansion, but the fact is that the U.S. economy is likely to remain on a low-inflation environment for some time. 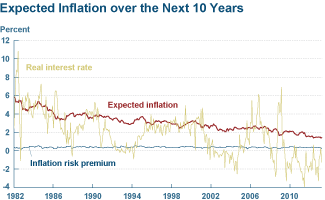 3. The current turmoil in emerging markets is a harbinger of a return to the 1990s

Massive portfolio rebalances are usually accompanied by bi-polar narratives. Prophecies of boom and gloom typically alternate, and this time has been no different. The over-hype on EMs' growth prospects that accompanied the euphoria phase has quickly been replaced in the last few months by references to a possible revival of the 1990s-like crisis in EMs.

It is true that, while unconventional monetary policies have been appropriately anti-cyclical in ACs implementing them, they have had inappropriately pro-cyclical consequences on EMs -- boosting credit and demand when most economies among the latter were already heated up, and threatening to accentuate a slowdown where it started to happen. It is also true that, regardless of the role played by the liquidity wall flooding EMs, these countries have in general been too complacent regarding structural reforms necessary for the exploitation of new growth opportunities.

Nevertheless, current exchange rate devaluations reflect the adjustment flexibility embedded in their currency regimes, as opposed to pegged rates which in the past made EM currencies sitting-ducks for speculative attacks. Furthermore, reserve cushions are much larger, both corporate and public-sector debts in most EMs are not as fragile as they were on the brink of the 1990s crises, and the proportion of equity-like investment and domestic currency-denominated debt is higher. Though policy responses will be challenging, apart from some vulnerable spots, there is more policy space to react to the challenges created by the global portfolio realignment.

In conclusion, the adjustment to the "normalization" of the US monetary policy may end up being not as disruptive as many analysts are expecting. It will depend on the pace of recovery in the US economy and/or the smoothness of China's adjustment-cum-slowdown. However, to fully overcome the current turmoil, EMs must not lose sight of their country-specific reform agendas.