Welcome to the Moment of Truth: self-adhesive postage for those too parched from the dry white season to lick a stamp to post a letter to the human heart. Got it?

What is the word for a man who has himself filmed visiting a former Nazi concentration camp in order to tar the theory of evolution with the brush of genocide? Low? Like dirt? Like worms?

Ben Stein, in case you haven't heard, is the face of Creationism in the new movie Expelled, which is about how "Big Science" is robbing radical geniuses of their rightful rewards - radical geniuses who say the universe is too complicated to figger out so it musta been made by magic. 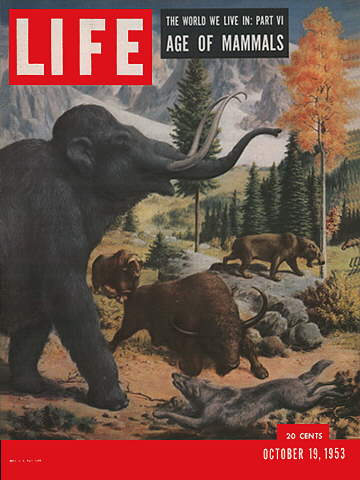 I know, I know! You wouldn't think Ben Stein could sink any lower. Here's an apologist for Richard Nixon, the author (ostensibly) of a book (or rather an Ann Coulter-style wad of airport toilet paper) on how liberals are more dangerous to America than terrorists, a man who has espoused the belief that the amount of assets one dies with is a direct indication of one's value to society - here is a mind so mediocre that he regularly lost battles of wits against MTV game show contestants - you wouldn't think a track record like that would leave room for further ethical and intellectual failure. But Ben Stein is a man of great determination. He is not content to rest on his laurels, or in his case to let such hideous, thorny laurels rest on him, though they threaten to crush him with the weight of their shamefulness.

No. He wants more crappy laurels heaped on top of him. He wants to be buried under them. You are still going to have Ben Stein to kick around. Only he's going leave something even worse on your shoe this time.

Ben Stein is a self-styled anti-elitist... who lives in Malibu. You know, where all those homespun rocking-chair types live. He believes in the moral superiority of people in the "heartland" to the nasty, arrogant folks who live on the Coasts. Kind of self-effacing, no? In his propagandistic elegy to the man who pardoned Nixon, Stein referred to Gerald Ford's hometown, Grand Rapids, Michigan, as the "heart of America's heartland." That was supposed to mean Gerald Ford was a good man.

Can there be any more facile and baldly propagandistic trope than the phrase "heart of America's heartland?" Probably, but still. It's pretty facile and baldly propagandistic, as tropes go. The heartland is where those with true American (as in United States of America) virtues (and blood) live. To be born in the heart of that heartland is to possess innate goodness found nowhere else on Earth. The actions of such folk are beyond critique. These are, like Ben Stein (in his wonderful dreams), farmers on family farms, who cannot tell a lie, working from sun-up to sundown, where there are no gay people, no liberals, no minorities, no greedy unions demanding higher pay - I mean handouts - from their employers, no Jews with their effeminate intellectual sophistry and snarky satire, or Muslims with their swarthy strangeness and hatred of our freedoms, or agnostics or atheists with their inability to tell right from wrong, where they mock the idea of government-funded education and health care, and no one ever questions authority.

The word "heartland" is an invocation of exceptionalism as powerful as "Fatherland." Now before you bristle at the term Fatherland, and start commenting snidely about Godwin's Law, let me share something with you: in his new movie denouncing Big Science's mean, bossy, and totally unfair bias against magical thinking, Stein actually walks through the remains of Dachau concentration camp as he asserts that Nazism would not have been possible without Darwin.

I know! That's exactly what I said! Yeah, and then I did that, too. And it still hurts.

I mean, the historical ignorance he displays, his dismissal of centuries of European anti-Semitism, his blindness to the role of religion in genocides of peoples long before Darwin was even a twinkle in a lucky zygote's chromosomes - these all betray the numbskullery of the notion of blaming the Holocaust on Darwin. But it's the hypocrisy of Ben Stein, like that of his hero Nixon calling the murdered students at Kent State "thugs," that makes the whole thing so breathtaking, heartbreaking and mind-blowing.

This man, this Ben Stein, who invokes American-style Volkische moral purity, pretending support for the earning class while favoring economic policies rewarding the ruling class at the expense of his vaunted "heartland," who impugns the patriotism of those who dare question the noble intent of our leaders, who sneers at intellectual "elites," this Ben Stein who champions a psuedo-scientific, politically oriented narrative of creation that would have made Himmler proud - can there be any doubt that Ben Stein, had he been born a German gentile, would have been a spokesman for National Socialism? I don't think anyone with a grasp of how academia, particularly science (particularly medicine), was taken over by quacks, politicos and party-line liars in the Germany of the 1930s can doubt it. 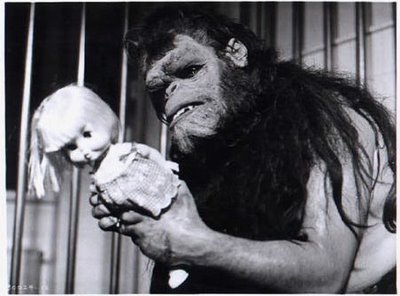 You may say it's rude to point it out, but I'm not the one who stomped all over Dachau calling Darwin a Nazi. And I'm not calling Ben Stein a Nazi. All I'm saying is: had he had the opportunity, he would have been a wholehearted Nazi supporter. All his current public positions indicate the validity of such an assessment. And he wouldn't have had to believe in Darwinian evolution to be one, either. All he would have had to believe, or say he believed, was that Germany and the purity of its traditions were in danger from an internal elitist liberal enemy.

See? Then he could go on to say that, in academia, the liberal elites, tainted with deranged or at best biased and totally unfair intellectual sophistry, were stealing jobs from more deserving scientists with wholesome beliefs. That the scientists with all the good ideas had been, in effect, Expelled from the scientific profession by a cabal of deceivers who control scientific knowledge.

All Ben Stein would have had to say to support the Nazis back then is what he's saying right now.

Just because George W. Bush won't be in office next year doesn't mean we've dodged the bullet of a white Christian supremacist dictatorship. We are not out of the woods yet, my darlings. That a man, let alone a Jew, could, without shame, walk on the graves of Holocaust victims and claim the theory of evolution was at fault, let alone a man whose nationalism, social darwinism (which is not Darwinism, by the way), anti-intellectualism, and disregard for the truth are beyond doubt - it's like some ghastly executioner's joke. If the message of Expelled weren't being taken seriously by a religio-political movement that has already caused two presidential elections to end in disaster, it would be merely obnoxious. Instead, it's chilling.

Can he sink any lower? Never underestimate the depths of degradation a Ben Stein might sound. My money's on Ben Stein to be the first human being to reach the Earth's core.

This has been the Moment of Truth. Good day!

Jeff Dorchen delivers the Moment of Truth every Saturday morning on the This Is Hell radio program.