Socially enlightened, singer-songwriter Bruce Cockburn is back with a new project and supporting tour. The following audio track, "The Iris Of The World," is a HuffPost exclusive taken from his upcoming studio album, Small Source Of Comfort, to be released on March 8th.

This lead track to Small Source of Comfort includes the humorously rueful line, "I'm good at catching rainbows, not so good at catching trout." The lyrical admission serves as a useful metaphor for Cockburn's approach to songwriting. "As you go through life, it's like taking a hike alongside a river," he explains. "Your eye catches little things that flash in the water, various stones and flotsam. I'm a bit of a packrat when it comes to saving these reflections. And, occasionally, a few of them make their way into songs." 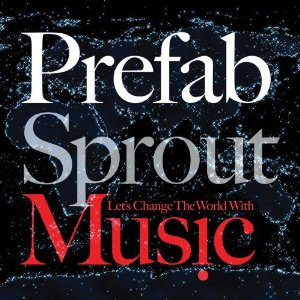 MR: Paddy, you're new album is titled Let's Change The World With Music. You're serious about that, aren't you.

PM: Doesn't your copy of the record have a giant As if... stenciled beneath the title?

PM: There is an actual title track, but--for various incredibly boring reasons--it failed to make the final selection. Shame, as it might have allowed me to duck this question...which I'm going to do anyway!

MR: So, after listening to the first track "Let There Be Music," you seem to equate it with creation which many eastern religions believe is the basis of creation. Is that where you stand?

PM: I thought it a nice concept. You know, God as invisible but audible. Like ad men, songwriters are always looking for a new angle. And as there are no new ideas under the sun, we end up retreading some old news. Beaten to the finishing line by incense burning ascetics, probably.

MR: In "Ride," are you calling out those who would "Ride, ride, home to Jesus..." as in those who are hypocritical about it?

PM: It's simply a song about goodness, about doing the right thing.

MR: Tongue-in-cheek or not, this album is more "spiritual" than any you've previously recorded. Has spirituality become more on your radar since you recorded this album in the nineties?

PM: It's an old record now, even though it's just seen the light of day. So, I have to put on my '92 head to remember where I was coming from back then... I think I was looking for a strong emotional lyrical base for the music. My belief's barely came into it, would you belief? I see the job of songwriter as being closer to a scriptwriter rather than a diarist.

The problem for a songwriter like me is that I love to write music. But I'm not sure that the music is terribly strong, so I try to distract myself and potential listeners by singing stuff over the top of it. And if I'm going to sing stuff over the top then I try to find a subject and a lyrical tone of voice that fits the music underneath. That's where I'm coming from. So, crazy as it may sound, my opinions and beliefs aren't that interesting to me. But I do remember thinking back in '92, can I get away with this, is it possible to make a white gospel record that is full of doubt?

MR: How would you say the group has evolved since the days of your first album, Steve McQueen?

MR: Has the estate truly ever forgiven you for borrowing the actor's moniker?

PM:Absolutely. That particular bike jumped the barbed wire fence a long time ago.

MR: What players join you on this project?

PM: It's all me, unfortunately. The entire album is my home demo, which we never got to record as a band back in '93.

PM: Yeah, even "Earth: The Story So Far" is performed by li'l ol' me and a computer made of straw. (Those were the days, eh?)

MR: If you or music could change the world, where would you start?

PM: I'm starting with the man in the mirror. I'm asking him to change his ways.

MR: Your music and your style haven't really strayed from the romantic side over all these years. As your song suggests, might you be one of the "Last Of The Great Romantics"?

PM: That song is about a chump who refuses to face facts. So, yes, I suppose I am.

MR: What advice would you have for new artists?

PM: Cover my songs. All of them... particularly you, Bublé. Oh, must I be serious? Listen to your heart. Then reach for the beta-blockers.

MR: What advice would you have for those wanting to change the world with music?

PM: For God's sake don't leave home without the right tools. It's really not a job for amateurs.