Emily Davidson has everything a musician needs to make it as a world-class soloist -- the drive, the talent, and the charisma that musicians need to attract a following.

"I just couldn't do it," Davidson says, over coffee in Somerville, Massachusetts. "I'd be playing a Dvorak concerto with a symphony somewhere, but I would feel like a total sellout."

On top of that, Davidson doesn't even care for the big classical pieces that drive the biggest audiences and the most popular acclaim.

That's all she wants to play.

That's all she's going to play.

And thanks to the Internet, that's all she has to play.

"There are two ways to make it as a musician," Davidson says. "One is the traditional--getting an agent, getting bookings, and trying to get noticed.

"There's a second way--find your own audience via social media. That's something most musicians won't do."

But in her solo work, Davidson takes the road less traveled for classical musicians--she posts videos of herself playing solo baroque cello.
People online eat it up.

"Most classical musicians are afraid to post videos of themselves playing," she says. "They've been told one wrong note can ruin their entire careers.

Davidson started posting videos on YouTube--performance and also messages of encouragement to her fellow musicians--nine years ago, when she was eighteen and YouTube was barely known.

Now her channel, youtube.com/emilyplayscello, has more than a quarter of a million hits and almost 2,000 subscribers. Davidson also enjoys a following on Patreon, a website that aggregates financial support for the arts--all for seventeenth century cello music played with gut, not steel, strings.

"People are really getting into it," she says of her performances of Italian cello music almost 500 years old. She has fans all over the planet and was delighted to learn that some of her inspirational videos have become the basis for a musician's workshop in Australia.

The early music community in general is "very female heavy," Davidson notes, "which you don't see a lot of in classical music. Early music requires a more sensitive approach and not the athleticism you find in modern classical--show pieces that really demonstrate your virtuosity.

"That doesn't exist so much in early music, which is perhaps why fewer men are drawn to it."

What's the appeal of early music for performers like Davidson?

"You can connect with the human experience from hundreds of years ago," she says. "The human experience and emotions haven't changed in all that time. The cello goes back to the early baroque period, and you can really feel the same emotions they felt back then when you play."

Part of Davidson's approach to early music is to recreate the sound as it existed at the time.

"Today, we usually play with loud metal strings, so that we can be heard in the back of enormous concert halls. That's not the kind of sound they were hearing in the 1600s, when they were playing with gut strings."

In addition, Davidson's DIY approach to performing and building an audience allows her to play the music the way she believes it ought to be played.

"Musicians are taught, don't let the instrument make you play louder or softer," she adds. "But when Bach and Vivaldi were composing, there would be an inequality among the notes. Some would be softer and some would be louder.

"I'm all about not fighting against what happens naturally on our instruments."

Doing things her own way is a hallmark of Davidson's burgeoning career.

"I've always enjoyed being my own voice," she says. "Social media gives you the most direct approach to your fans. You don't have to go through anyone. You don't have to have an agent or anyone looking over your shoulder and controlling your image.

"You don't have to get your teacher's approval, and a conductor doesn't have to say I can do something. That's kind of liberating."

As for chasing the dream of playing that Dvorak cello concerto in front of an audience of thousands for a big paycheck?

It's just not Davidson's dream.

"It would feel like a lie," she says. "What I want to do in my heart is driving me every day. How I feel about early music and the repertoire I play can't be denied. My brain and my happiness would just shut down. I don't have it in me to be a sellout." 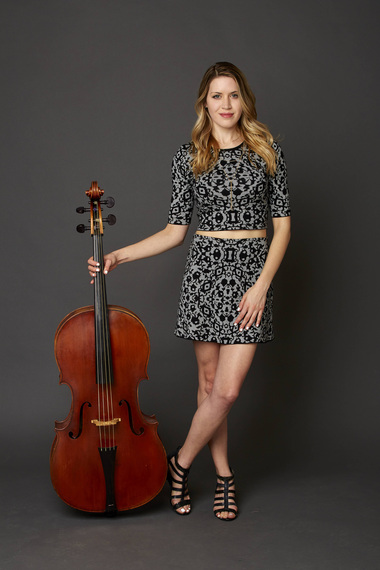