Emily Dickinson was born 181 years ago today. A "nobody" in her lifetime and canonized after death, she wrote strange, affecting poems built as much by words as by punctuation. Her revolutionary take on language prophesied modernism and resists stodginess, so she is seemingly always "having a cultural moment," as a New York Times writer put it last year.

This year was no exception. Cementing her reputation as "the poet most set to music, ever," Jeff Tweedy confessed to plucking and reorganizing Dickinson's words to write songs for Wilco's "most adventurous album in a decade," The Whole Love. It was a quiet intrusion: Amherst's most famous loner, helping script a conversation a hundred years past her time.

According to Cristanne Miller, a Dickinson expert who teaches at the University of Buffalo, the switch works because Dickinson -- herself an accomplished pianist who fretted over her sister's inability to learn their duets -- essentially wrote songs. Her poems are short, modified forms of ballads or hymns. She referred to her poems as "ditties"; in them she was a "songbird." Indeed, she may even have written melodic compositions of her own. In a letter Miller quoted, a friend of the Dickinson family recalled "those blissful evenings at Austin, when Emily was at the piano playing weird and beautiful music all from her own inspiration."

To celebrate Dickinson's lasting imprint on the way we shape language, and in honor of her birthday today, we've compiled a sampling of modern musical adaptations -- penned by alternative rockers, opera composers, and even the first lady of France -- along with an explanation of their writing process in their own words. Read on for John Eaton, Melissa Swingle, Jeff Tweedy, Carla Bruni and more, on the science of channeling Dickinson's "weird and beautiful music" a hundred years on.

(And because birthdays come only once a year, don't miss a Dickinson expert's tribute to one of the greatest poems ever written.) 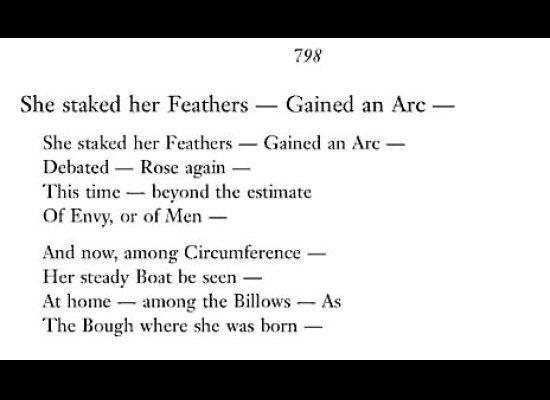 1 / 7
John Eaton: "She staked her Feathers -- Gained an Arc --"
In 1975, the iconic American opera composer John Eaton broke from his teaching position at Indiana University in Bloomington, then the world's largest conservatory, to join his wife, a young mezzo-soprano who'd won a Fulbright grant to study under Giacomo Puccini's coach, Luigi Ricci, in Europe. In the midst of Eaton's "house-father" duties (his wife Nelda had taken to nursing their newborn daughter during intermissions), he received an anguished letter from his friend Tibor Kozma, the Hungarian-American conductor who'd inaugurated Bloomington's opera house with Eaton's opera "Heracles." The nature of Kozma's anguish remains a secret Eaton will not divulge. But he recently spoke with the Huffington Post about the song he wrote immediately after reading Kozma's letter, written to lift Kozma's spirits. No audio record seems to exist of it, the first and last Eaton work based on an Emily Dickinson poem. But Eaton says Kozma received and heard "She staked her Feathers -- Gained and Arc --" just before he died in 1976. <em>Most of her poems are complete insights in themselves and if you tamper with them you're apt to destroy that. It's a very static world, usually one insight per poem, and the insight tends to be something expressed in nouns and adjectives rather than verbs or adverbs. But in this case, [the poem] does imply a procession, a struggle. It implies a motion and that's something that generally, you know, in an Emily Dickinson poem, you don't find. Especially the way it's set up, with the dashes in the middle -- it's very easy to take more liberties with it. It begins with a phrase that sort of goes up: "She staked her Feathers -- Gained an Arc." So the song actually goes up and creates an arc, you know, and then that continues throughout until finally, "At home -- among the Billows." That gives the piano accompaniment a chance to kind of scatter around, rumble around, and "the Bough where she was born--" let it come to a kind of halt. I wanted to cheer [Kozma] up, express my admiration for the fact that no matter what happened, he kept persevering. And I just found that a very moving poem about life.</em>