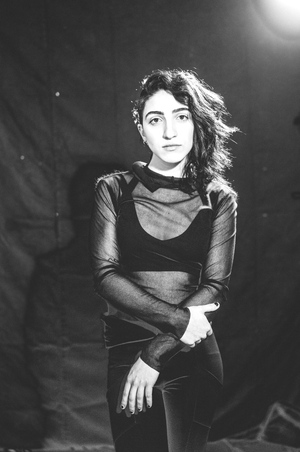 It's 7:00 on an unusually cloudy Miami morning, and 21-year old Emily Estefan is hard at work filming her first music video "F#ck To Be" from her upcoming album, Take Whatever You Want. At the center of the video is a confident, young woman stepping out of the shadows for the first time. Emily is portraying different fictional characters ranging from a delicate porcelain doll to a sex symbol, turning the lens on society's expectations.

"F#ck To Be" is a bold song for a debut single, but Emily says that's her motto for life. At 5-foot-2, she's an emerging powerhouse with a strong message: she will not be molded to fit a particular image.

With minimal make-up, Emily sports a half-buzzed hair style with flowing brown curls dangling atop her eyeglasses. When it comes to fashion, she calls herself a "simple chick;" jeans and a t-shirt. Emily describes herself as an alien shrimp. It's even the name of her record label, Alien Shrimp Records.

"I feel a lot of people succumb to a lot of negative energy in life," Emily says. "I think it's so important to be connected to your inner child and that inner weirdo that puts you on the ground and makes you realize that everybody is such a different color, and we all make this beautiful painting."

Weaving different shades and colors is the essence of this artist's music. Her vocals have the sounds of a Norah Jones, but if you listen closely her lyrics have the edginess of a Pink. She says each song she sings tells a story; her story.

And Emily's story is the stuff of legends. As each scene in the video for "F#ck To Be" is meticulously filmed and reviewed, sitting in the director's chair is her legendary mother, Gloria Estefan. The elder Estefan is largely credited for taking music out of the Miami streets and onto mainstream radio. Gloria's racked up seven Grammy Awards and most recently took Broadway by storm with her autobiographical musical, On Your Feet.

If you think having a famous parent is easy, especially if you want to break into show business, it cuts both ways. Emily says today she celebrates both of her parents' nearly unparalleled success, but that wasn't always the case. She says for a long time she couldn't understand why everybody wanted a piece of her life or expected her to be a certain way.

While Gloria and husband Emilio Estefan learned by taking chances and sheer tenacity, Emily's approach has been more measured. Earlier this year she graduated from the prestigious Berklee College of Music. Other notable alumni from the school have included The Dixie Chicks' Natalie Maines, John Mayer and Melissa Etheridge to name a few. Emily has no plans to mirror her mother's career, which would be an admittedly impossible trail to blaze. She is embracing her own sound and is comfortable in her own skin.

"A lot of people want me to be just like my mom," Emily says. "If you take one look at me, you see already that I'm not." 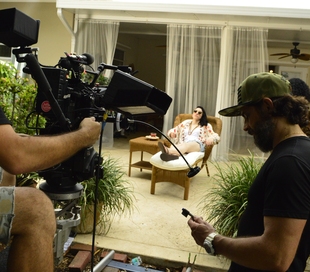 It's been a year and a few months in the making, but this January Emily's CD Take Whatever You Want will be released. Emily wrote, recorded and produced the album at her college apartment in Boston almost entirely on her own.

She describes the CD as a "manic genre explosion." The songs range from funny and quirky to those about female empowerment. The title, Take Whatever You Want, is reflective of how she wants people to view her music.

"Whatever you like; take it," she says. "I don't apologize for it. It's honest. I'm not trying to fit any stereotype. It merely is just what explodes out of me and how I can translate that to something you can hear and take home with you."

The path to Emily using her voice to express herself has not been easy. As a little girl she found her home behind a drum set. At 8 years old she started playing drums in her mother's concerts. She always loved singing, but was afraid to open her mouth. Her biggest fear---sounding too much like her mom. She didn't want the comparisons.

"It was almost worth it to not sing because then I wouldn't be able to be an individual," she says.

That all changed when she was 18 years old. While on break from school, Emily gave the scariest performance of her life. She sang in front of her mother for the first time.

"I said, 'I need to do something with you one on one, and I need you to not cry and not look at me,'" she recalls. "That's the only time I can honestly remember that I felt like I was going to vomit."

Two years later Emily took the stage with her mother at the Hollywood Bowl. In front of nearly 20,000 people she made her singing debut performing "Where the Boys Are," made famous by Connie Francis, one of Emily's music idols.

Her performance earned her a thunderous ovation, but Emily questioned if she deserved the accolades or if they came just because she was the daughter of the "Conga Queen," as she affectionately calls her mother. She forged ahead and didn't let her insecurities stop her.

"I do it for no other reason than because I love it, and I need to wake up and do it," she says.

Emily says fame is not important to her. She just wants to be able to play her music and touch even one person's life. More importantly, she hopes in the future she can still say, "I'm comfortable being this person." Her mother once told her: "You can't fake real, so don't try."

Emily doesn't need to try. She may not have chosen the life she was born into, but she's in complete control of her future. No one can tell her who the 'F#ck To Be.'