For anyone who has followed the saga of Emily Gould, this week's New York Times magazine cover story comes as a shock only to the extent that they would publish it. True, they've already gotten tons of buzz out of it — and if that is the goal (as NYT mag editor Gerry Marzorati seemed to indicate here), then who cares what that buzz is? Because, well, it's not good — and for anyone who's followed the saga of Emily Gould, it's not surprising.

Those are the people who are chattering right now, and it amounts to a collective online roll of the eyes: Good God, NYT. The cover? Really? For this? I mean, Mark Leibovich's brilliant profile of Chris Matthews or a closely-researched examination of why teen girls are astronomically more likely to be injured playing sports — those are cover stories, packed with information and analysis borne of research and reporting. This was an extended blog post, an overlong "Modern Love" essay, 7,937 words that did not venture beyond the author's own experience; for some perspective, the NYT's investigative expose on the Pentagon's purported ties to on-air military analysts had 7,486).

And for what? To attract reader comments that will be so overwhelmingly negative that they will close after less than 24 hours? The chance for Gould to settle a score and for the NYT to play catch-up to Page Six magazine, which had the 'he-said' version of this story back in February? To shine a light on the strange and mysterious world of blogging? (If so, mission not accomplished: NYO writer (and former Gawker editor himself) Matt Haber notes that the piece is "light in sociology or cultural grasping," and New York's Daily Intel notes acidly that "Some bloggers are able to write about things other than themselves. Seriously.")

You don't need to have heard of Emily Gould previously to judge her harshly (Wonders NYT commenter Mark Kasen of St. Louis, MO: "Don't you have important things to do? Don't you have real issues to write about that might affect your generation and the country generally?"), but it helps — it provides the context of having heard the story before, of knowing by the second page that you've hit the sentence that pretty much sums it all up:

I walked down the hall of my high school passing out copies of a comic-book zine I drew, featuring a mock superhero called SuperEmily, who battled thinly veiled versions of my grade's reigning mean girls. In college, I sent out an all-student e-mail message revealing that an ex-boyfriend shaved his chest hair.

But for those unfamiliar with the saga of Emily Gould (which, I should note, was never so much an internet pastime than something that occurred as a result of reading Gawker and starting to notice her posts becoming more and more self-referential, her barbs more careless, herself in a metallic-toned bathing suit) (two, if you saw her Facebook page). There was the time she summarily 'executed' a number of Gawker commenters for criticizing her, castigating male commenters for mocking her looks even as she dissed four other women in the process ("Gawker is a safe space for women. Any by "women," of course, I mostly mean "me"). That was around the time she did something similar on her personal blog, striking back at mean commenters by publishing their email addresses.

Then there was her NYT op-ed last May about the Jimmy Kimmel incident (backstory here), in which she asserted an unconfirmed tip from a stranger attesting to Kimmel's public drunkenness as fact in the paper of record, after Kimmel had explicitly denied it on the air (she stated as fact that Kimmel had "gone out drinking," an allegation unsupported by anything other than anonymous sighting — way to fact check, NYT). Then, of course, there was "Heartbreak Soup" — sure quoted a lot by the NYT in Gould's blog excerpt sidebar for a super-secret blog! — offered up to certain people in the media for perusal before being published on Facebook.

What else? The sudden cultivation of friendship with Julia Allison, with whom she seemed all too happy to appear in photographs (though she certainly doesn't treat her like a friend in this piece); the public commentary on Gawker about former beau and current co-worker Josh Stein; the New York magazine cover story last fall in which she 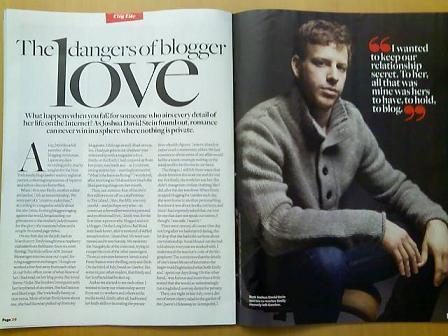 expressed angst about her job, yet still managed to reveal more details of her love life; the revelations in Stein's Page Six piece — all combine to provide the backstory to Gould's newly-minted version, which may be one of the reasons it has so far been received with cynicism.

At the end of the day, though, it's just a cover story, one of 52 that the NYT mag publishes every year, so why not take a risk and publish something bloggy, buzzy and down with the kids? (#5 on MEL with a bullet!) It's the NYT's call, to be sure, but I can't help thinking they got snowed; it's the third magazine piece on Gawker, and the second on the star-cross'd Gould-Stein hookup. Also, even as they're publishing Gould's account of the lessons she's learned online, there she is on Gawker, the same day, opining on "Sex and the City" for Gawker's sister-site Jezebel, through the well-worn lens of her own experience. In fact, at one point yesterday Gawker showcased Gould's piece (Jezebel), Gould's piece (NYT) and a fresh post by Stein — all together on the same page. The NYT also fails to mention her new gig as a blogger for Galleycat, Mediabistro's book-publishing blog, which has her blogging daily about her former industry. All of which suggests that she doesn't quite have the distance from her old online self as the piece suggests.

Gould is a talented writer and blogger, as evidenced by her continued presence in this sphere, but the NYT did her, itself, or really the blogosphere no favors in accepting this essay as a cover story. As Daily Intel pointed out, there are bloggers capable of writing about something other than themselves, even at Gawker (I challenge you to come up with one seamy story about the excellent Alex Pareene or point to any TMI post by Choire Sicha). Not everyone navel-gazes so completely, or uses the pronoun "I" so reflexively — there are many people doing great work online writing on topics other than themselves. Sometimes, Gould is even one of them; alas, not this time.

Update: I should note that I personally know Gould, Allison, Pareene, Sicha, Stein, Coen, Haber and a number of the people who write for the sites I link to, including FishbowlNY, which seems a particularly apt name in this context.