One day after finding out about a girl bullied on their parade route, the all female Krewe of Muses hosted a personal parade for her in their float den. Muses founder Staci Rosenberg pulled the event together and New Orleans locals are calling it Emily Gras. Author Amy Mueller described how her daughter, Emily, who anticipated the parade all year, was traumatized by a drunk who mocked the autistic girl. Emily left in tears, her Mardi Gras ruined. Amy expresses it beautifully in her NOLA Femmes post, Lit Up Like a Parade.

Since the post ran, Emily has not only been hosted by the Muses; she's been entertained by the 610 Stompers ordinary men with extraordinary moves; the Rolling Elvi, Pussyfooters and the Muff-A-Lottas. And a group of veterans has offered her a security escort for any parade she wants to attend next year. The family is still sorting through all the offers from comment boards and Facebook, which have been overwhelming. Emily's story has also reached the national media, as the best in human interest stories will, and I wouldn't be surprised to see her on New Orleans native Ellen DeGeneres' show within the week.

This was my first year to ride with a superkrewe, and I saw many kids who just missed catching a toy have their day saved by someone who caught and returned it. Reading about the worst of human nature in a celebration that's all about joy gripped the hearts of readers and the outpouring of support has reached avalanche proportions. It's also a testament to Amy's writing.

Emily has had only-in-New-Orleans invitations from Chewbaccaus; NOLA Pyrates; a Skinz N Bonez Special Hexx Skellie Brellie; a Krewe of Nyx hand-decorated purse; and hundreds of coveted glitter shoes caught by NOLA Femmes readers from around the world.

After all this morning's excitement, her mom, @amymueller504, Tweeted: "Even on Emily Gras, Queen Emily has math homework." She also advised:

Please remember, as we celebrate #EmilyGras and Miss Emily, to be mindful of your words, offer a bit of kindness to one another, and shine.

This year's Muses queen, NOLA native and Oscar nominee Patricia Clarkson, reigned from the giant stiletto pump lit up by LED lights with Muses spelled out in pink. Saints kicker Garrett Hartley rode in the shoe at the Saints Super Bowl Celebration Parade. Today Emily stood in the same glowing Muses shoe and looked out at the world in its best light. 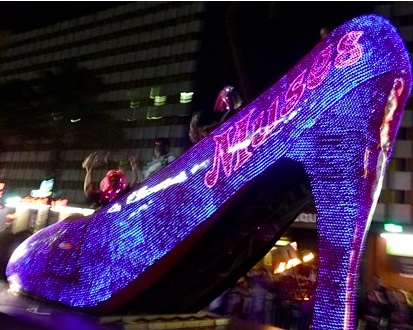