Through their two previous Sub Pop albums, the group Band of Horses developed a loyal fan base and a sound that many compared to that of Neil Young's. On their latest album Infinite Arms, BOH expands their musical vision as they shake that earlier comparison and have their first Top Ten hit in the process. To discuss their new project and its brave DIY origin is the group's lead singer and main songwriter, Ben Bridwell. 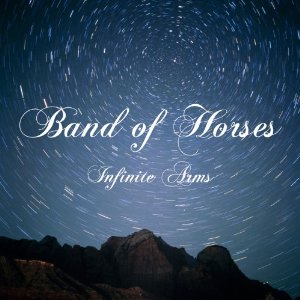 A Conversation with Ben Bridwell of Band of Horses

Mike Ragogna: Ben, in general, can you explain how you approached your new album Infinite Arms differently than Everything All The Time and Cease To Begin?

BB: I sure hope so. It sure feels like we're hitting some new horizons finally. Yeah, there was no doubt in my mind that was what we wanted to do was to produce it ourselves, and it ended it up just being liberating as hell since we could just do whatever we wanted.

MR: Let's talk about the process. You started writing the songs about 2 1/2 years ago?

MR: And then you started recording about a year ago.

MR: The group amassed about 30 or so songs. How did you thin out that number and decide which were going to make the cut?

BB: Well, it's pretty obvious which songs worked and were going to fit with what we were doing. You know, those were just ideas, and I wouldn't consider them necessary songs, more like rough sketches. So, immediately, we kind of knew like, okay, maybe this one or that one just didn't really fit. Soon we realized we had around 22 songs, and then, it was kind of a process of elimination. It was pretty obvious what needed to be on the record and what need not be on there. The songs were kind of revealing themselves at an early stage, being like okay, promising, or maybe just stretching it a little too far.

MR: After your deal with Sub Pop ended, Band of Horses then took the approach of self-producing and funding the new record, overseeing all of the business and creative aspects yourselves, right?

MR: How did you decide to take that path as opposed to trying to find a new label that would take all that on?

BB: Well, our contract was up with Sub Pop, and we knew that we would be in a good position with bargaining power since we were going to fund it ourselves. It just seemed like the smart thing to do now that things have changed so much in an industry where artists actually have a lot of the power back in their hands. We felt like this would be the perfect time to kind of utilize that power, so we sat in the driver's seat, and let everyone who was interested come to us.

MR: Your strategy paid off in a big way with a major label signing you. Plus it hit #7 on Billboard's album chart last week.

BB: Yeah, that's a first for us. The top ten. Really cool.

MR: Yeah. Your DIY approach is what most artists have to adopt for survival. In your case, you had a track record so it paid off, but most new bands don't have as rich a history. What is your advice for these artists?

BB: Well, it's hard to tell because, you know, I wouldn't be talking to you on the phone right now if it weren't for Sub Pop taking care of us for those two records and getting us to the level that we were at. I think that every band is different, and obviously, if you can afford to do it yourself and you have the patience and the resources to get yourself out there on your own, you go for that and the ownership of your art. But for some bands, it doesn't work that way. Sometimes you need that machine behind you to get you to that next level. Honestly, it took us being a part of that kind of machine to get us to the level where we could do it ourselves. So, I think each band scenario is going to be unique for whoever it is. It's hard to say which one's right and which one's wrong because I wouldn't have been on the path to success if it wasn't for Sub Pop, you know?

MR: Right. So, lets talk about the music. What's going on in the song "NW Apt."?

MR: You also have the surreal "Factory." I love the line, "...the elevator in the hotel lobby has a lazy door," and it's pretty funny because the song itself has this lazy approach. Was that one written about being on the road?

BB: Well, I was traveling when I wrote it, but I was not on tour with the band. I was actually out writing songs for the new record, and I had some crazy stuff going on. That song just kind of ended up tapping me on the shoulder. Even though some of it is a bit maybe too autobiographical for my own tastes, a lot of it dances around subjects like all my songs do. I try not to be too specific.

MR: In the song "Compliments," you're "fixing a drink in the morning with the way things are." But you're fixing that drink to the tempo and swing feel of The Beatles' "Fixing A Hole." I thought that was clever and pretty funny.

BB: You were actually the first one to hit the nail on the head. I was totally looking for something to grasp onto and absolutely grabbed that.

MR: What's all this about a "hospital call" in that song?

BB: I don't really know, that might have been a bit more abstract. Sometimes it takes me a while to remember exactly what the hell I was talking about when I wrote some of these songs. If you ask me a year from now, I actually might remember.

MR: Nice. In the song "Laredo," you sing about being at a crossroads with yourself. Was that literally what was going on?

BB: Possibly, I'm not really sure. Sometimes, the words just kind of come to me and I can't remember if I was actually writing this about myself in particular or about somebody else or about nobody at all. I don't remember, it's so strange...

MR: You've got what I would describe as an outdoor, ambient waltz as your title track, "Infinite Arms." Because I'm old, it reminds me of the Ozark Mountain Daredevils' "Spaceship Orion" and Poco's "Spellbound" from their Legend album. I imagine you have some musical influences when you write and record. Who are they?

BB: Easily, Neil Young. I grew up with a lot of classic rock stuff with my parents, and a lot of soul music. Those are huge influences on me. But more contemporary influences are My Morning Jacket, The Black Lips, Grandaddy...so yeah, I wear my influences a bit heavy on the sleeve.

MR: No, it's nice. And actually, the Neil Young comparison was the one that everyone has been making regarding your first two records. But that comparison won't be applicable to Infinite Arms since it expands your band's musical vision.

BB: Well, maybe we are coming more into our own now. You know, it's a natural progression, and maybe we are slow on the learning curve, I'm not sure. But whatever it is it happened organically, and we feel good about it.

MR: What was the procedure in the studio when you guys got together as a collaborative?

BB: In the beginning, we had a bunch of demos that we shipped around via e-mail. Those guys know how to play instruments well. I never really learned how to play traditionally, so I don't know how to jam. A lot of these songs that I wrote demos for, I didn't even really know how to play on guitar because a lot of demos were going to synthesizers and stuff. So, once we got to the initial session, I stood in the vocal booth, and the other guys would listen to the demo and try to recreate it. Luckily, they are such talented players that they could interpret where I was coming from.

MR: Was everything a group decision or was there an alpha dog?

BB: It was democratic, really. There was no alpha personality. Everybody's idea was taken very seriously, and we did whatever was best for the song. We had a discussion about it, but I think we all ended up on the same page since we all share the same band at this point.

MR: Since you've ended up on the Sony label, I'm sure your aware of your phenomenal old school label mates. Are there any particular artists in the Sony family that are fascinating to you?

BB: Oh my God, absolutely. Bob Dylan, Bruce Springsteen, Neil Diamond, and Barbara Streisand are still producing records for the label. There are so many, plus contemporary bands like Passion Pit, and MGMT. It's great to be in the same company as them.

MR: How did it feel performing with Pearl Jam the other night?

BB: The whole night was so crazy. They were so good to us and so hospitable and just so egoless...I don't know, man. I don't know if they've ever had any sort of ego problems, but they sure don't show it. They are so damned nice, and were so inspiring to watch play every night. The fact that I got to do a couple of songs with them, and Ed came out and did a couple of songs with us was just frickin' mind-blowing. It reached an apex when doing "Hunger Strike," I was trying to not start crying. I was so attached.

MR: You were brought out for the Chris Cornell part, right?

BB: Exactly. It was the end of the tour, and that song was such a major song when I was growing up, a huge turning point in my life of really getting into my own musical taste. To be in that full circle moment really just took my breath away to say the least.

MR: What's the future for Band of Horses?

BB: Well, I think it's hopefully making a new record on the same kind of terms that we just did without anybody breathing down our necks...kind of standing on what we started here with this record. It feels like a rebirth for us. As far as any success or anything like that, we are perfectly content where we are, so we don't think of it in terms like that. We are very happy where we are and just lucky to be here, I guess.